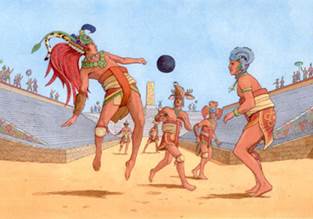 Now that the game to end all games is over (except for the payment of bets) it’s time to take a good look at the game and its implications.  Football can be considered a continuation of ancient tribal rituals practiced across civilizations all over the world.

Gentlemen, don’t get your knickers in a bunch, this is a (somewhat) complimentary piece and will not denigrate your masculinity or talk you down personally.

Ancient civilizations played some sort of ball game both for entertainment and in place of war-like activities.  The Mongols on the Steppes batted around a goat’s head and the Mayans kicked around a ball to win a game that forfeited the losing captain’s head.  But these activities were in place of all-out warfare that would have killed hundreds or even thousands more humans.  Some Native American tribes even called their games “little brother of war.”

There have been many, many rituals associated with today’s ball games to include the high school coach’s pre-game prayer to the gyrations of the cheerleaders and the crowd chants.  The pre-game feast currently known as tail-gating is steeped in history as is the post-game celebration alcohol frenzy.

According to Wikipedia, “Games capture the ideas and worldviews of their cultures and pass them on to the next generation. Games were important as cultural and social bonding events, as teaching tools and as markers of social status. As pastimes of royalty and the elite, some games became common features of court culture…”

Yes, it seems that we, as a civilization, use these head-cracking, bone-breaking, breath-holding events as cultural and something to pass along to future generations.  The rites and rituals are codified in the game rules and the unwritten laws of “gamesmanship.”  It doesn’t matter that the battering that players receive could cause permanent brain damage or painful deformation… it can be shared by many and it’s a just a GAME!

This game incites the blood to course through the veins and arteries at maximum speed, causes comrades and close friends to pound on each other as something significant happens down on the field and for spouses and significant others to wonder how their man comes home bloody and battered as if they had been down on the field with the high-paid professionals!

But you do have to look at it from the standpoint of civilization.  Just think, if football had been played earlier than 1869, there might have been a series of North & South football games rather than a major Civil War.  But long before that, city states and small nations had turned to sporting events, especially vigorous ones involving much pushing and shoving, to let off steam that had built up over “causes” and kept the populace from getting inflamed and killing each other off.  The Roman Caesars knew, “Two things only the people anxiously desire — bread and circuses.” The government kept the Roman populace happy by distributing free food and staging huge spectacles [games in which much blood was shed.

From August until February teams of men and boys suit up and rush at each other, colliding in spectacular mash-ups that make some hide their eyes and others turn to raucous cheering.  What is it in the human animal that makes them need this blood sport?  How have we managed to make it all this way, several thousand years, still wanting to beat each other severely about the head and shoulders (and any other part of the body allowed by the rules of play)?  Will we ever find the genes responsible for this act of aggression?  And if we do, what will we do with them???