A Beach Chair, A Blanket and the Leonids © - by StarzJC 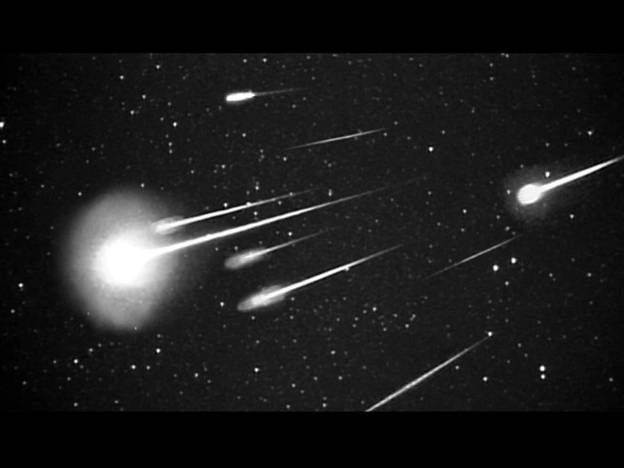 So what’s so amazing about meteor showers, anyway?  Much of the time the Moon is too bright to see much and the rest of the time it’s either too hot or too cold to sit outside and wait for the few streaks to pass overhead.

There is, however, a Meteor shower that goes through peaks and in 1998 I witnessed an amazing sight… the Leonids.

A little boring science first:  Historically, the Leonids have produced some of the most spectacular meteor storms in history, with rates as many as thousands of meteors per hour. These storms sometimes recur in cycles of 33 to 34 years. Most years, the Lion whimpers rather than roars, producing a maximum of perhaps 10-15 meteors per hour.  Like the October Orionids, the Leonids ordinarily pick up steam after midnight and put out the greatest meteor numbers just before dawn.

Meteor astronomy was born on the night of November 12-13, 1833.  During the hours after sunset on November 12, some astronomers noted an unusual number of meteors in the sky, but it was the early morning hours of the 13th that left the greatest impression on the people of eastern North America.  During the 4 hours before dawn, the skies were lit up by meteors.

Reactions to that year’s display varied from the hysterical (with the superstitious claiming Judgment Day was at hand), to unbridled excitement in the scientific community, who estimated that a thousand meteors a minute were emanating from the constellation Leo. Newspapers of the time reveal that everyone was aware of the spectacle.  People cried out with excitement over the display and many were awakened by flashes of light cast into normally dark bedrooms by the fireballs.

After spending the last weeks of 1833 trying to collect as much information on the event as possible, Denison Olmsted, U.S. physicist and astronomer, presented his early findings in January 1834. He noted the shower was of short duration.  He stated it was not seen in Europe, nor west of Ohio.  However, several Native American tribes in the U.S. Midwest and west did see it.  These indigenous people called the showers “the night the stars fell.”  Olmstead’s personal observations showed that the meteors radiated from a point in the constellation of Leo. Based on the fact that there had been an abnormal display of meteors observed in Europe and the Middle East during November 1832, Olmsted theorized that the meteors had originated from a cloud of particles in space. Although the exact nature of this cloud was not explained properly, it did lead the way to a more serious study of meteor showers.

It wouldn’t be until Ernst Tempel (1865) and Horace Parnell Tuttle (1866) independently observed a comet (which would eventually was to bear both their names) and identified that it has a periodic cycle which matches the observed Leonid shower cycles.

It is the debris from Tempel-Tuttle that actually creates the meteor showers as Earth passes through it and it’s the roughly 33 year cycle that affects how brilliant the shower is.

Now to the reason for all of this… The year I remember best was 1998.  I was visiting my parents and happened to see the information on the Leonids that evening on the eleven o’clock news.  For the life of me, I can’t understand what gripped me, but I was determined to see what a meteor shower really looked like, especially because the announcer had been so emphatic that this year was going to be spectacular.

It had been brisk that day… thinking back, I had worn coat, gloves, scarf and thermal underwear working out in the yard, but I knew it would be much colder waiting out there as midnight approached and I had to devise a strategy for keeping warm.

Comfort was important, too, since I was going to try to drag either one or both of my parents outside to witness the spectacle with me.  I wracked my brain trying to think of something that would give us ease of visibility and a way to encourage my folks to come view it all with me.

Blankets were a must and I rummaged in the linen closet.  Out came the queen sized blankets and one that was older than me.  I knew we had to be well wrapped because it had already been a very cold week.

My mother balked at standing outside looking like an Eskimo, but my father was eager to see the display.  He took me down into the garage and we dragged down the lawn chairs.  We set them up in the back yard but they didn’t seem as stable in November as they had six months earlier in May and I returned to the garage to search for something to steady them on the grass.  It was then I spied the chaise lounges propped up against the back wall.

The chaises were perfect!  We opened them up and wrapped ourselves in the blankets and lay down to watch. Half an hour, an hour went by and just one little sizzle marked the passage of time.  Finally, my father decided he needed some hot chocolate and went inside.  I had a feeling he wasn’t going to come back out to join me, so I grabbed his blankets and added them to my insulation.

Time dragged and then suddenly the sky began to flame.  Searing pinpoints of light streaked from behind the TV antenna over the house and down behind the twin oaks at the back of the yard.  Ten, twenty, fifty streaks crossed the sky and disappeared to be replaced by that many and more.  I was too much in awe to run inside and get my parents, but lay there and watched.  Suddenly there was a baseball sized fireball streaking from the antenna to the oaks then another and another!  I didn’t care how cold it was, I was just happy to be witnessing the show.

I’m not sure how long it all lasted… I do know it didn’t happen again while I was outside.  When I finally went inside, my father told me I’d spent over three hours outside in near freezing weather.  My unscientific mother had long since gone to bed.

But for all the science behind it, I can tell you, it’s something I won’t ever forget.  I’m going to keep track of all the meteor showers listed on the NASA web page and be out there to watch for those amazing pinpoints of light… and maybe, just maybe, I’ll get to see another fireball or two!

The Leonids generally begin on November 13 and end on November 21, with maximum generally occurring during the night of November 17/18. The Leonids are barely detectable on the beginning and ending dates, but observers are generally treated to displays of about 10 meteors per hour on the night of maximum. About every 33 years, the Leonids enter a phase of enhanced activity that accompanies the return of its parent comet.  During these periods, rates can amount to hundreds and even thousands of meteors per hour. The last such enhanced period occurred during the period of 1998-2002 and the Leonids have been winding down ever since.