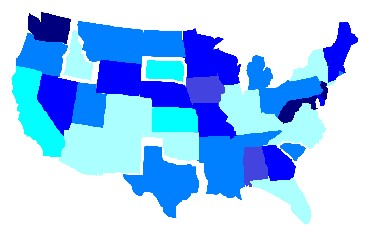 The U.S. could have had more than 50 states if every attempt at secession had ended up with a new state (and with those added states would come more state slogans to learn) according to cheatsheet.com. Here are some of the more notable states that almost were a part of our country, including a former state that people just forgot existed (No. 11).

However, the good people of Jefferson couldn’t agree on a constitution and so Jefferson state became Jefferson territory, and eventually Colorado territory.

The next two proposals for Jefferson state took place in Texas. Texas was allowed to split into up to four states as part of getting admitted to the U.S. So, in 1870, Jefferson state was proposed in southeast Texas (south of the San Antonio River). Unlike Kansas, this version of Jefferson wasn’t really taken seriously. Decades later, in 1915, Western Texas was proposed as housing Jefferson state, but not enough state senators approved the idea.

The fourth region where Jefferson was proposed, and where proponents are still advocating for it, is in the northwest, with support from counties from northern California and southern Oregon. In 1941 supporters came out in full force, passing out flyers and marching with guns. But after Pearl Harbor, the group lost momentum. That is, until 2018 when the Jefferson Declaration of Independence was released online. Will attempt number five be the one that sticks? We aren’t holding our breath.

Delmarva is a small peninsula just off the east coast of Maryland. It’s split between the three states that comprise its name: Deleware, Maryland, and Virginia. There have been proposals for Maryland and Virginia to cede their land and let Deleware absorb them under the name Delmarva dating as far back as 1833. The first proposal for secession actually got passed by the Deleware Senate, the Deleware House of Representatives, and the Maryland House of Delegates. It didn’t pass through the Maryland Senate and hasn’t gotten any real traction in recent history.

Though it looks like “desert,” Deseret is actually named after a word from the Book of Mormon that means “honeybee.” It’s a region that the Mormons claimed in what’s now Utah, plus parts of several other states. The Mormons wanted their own state where they could govern themselves. Congress denied the request in 1849 but gave the Mormons the Utah territory (which was smaller than their proposed Deseret state).

The Mormon elders had drafted laws and regulations for Deseret and ended up enacting them under the territory of Utah’s government. The elders continued to meet in secret after the territory’s legislative sessions for the next 20 or so years. Hoping to resurrect the great state of Deseret, they would rewrite the laws that had been enacted during the session under the name of “Deseret. When the railroads came in and brought new, non-Mormon settlers, the thought of creating a Mormon-based state was abandoned.

Can you guess what region of the country Nickajack was considered for statehood? Well, don’t think about it too hard because the name won’t give it away, at least not in English. The state of Nickajack would have consisted of portions of eastern Tennessee and northern Alabama. The name comes from Cherokee language since the area was originally home to several Cherokee tribes.

During the Civil War, the people living in the region that would have occupied Nickajack wanted to secede because they wanted nothing to do with the Civil War. They weren’t slave owners and were for the most part poor farmers who didn’t want to join the Confederate army. They attempted to secede legally instead of just declaring themselves as a new state, a la Scott. Several of the citizens in the region ended up joining the Union army, and the state of Nickajack never materialized.

Native Americans sought statehood out of a desire to have a state that represented their interests. They proposed the state of Sequoyah in 1905, which would be based out of Indian Territory (which is now eastern Oklahoma). This is the same tract of land where the U.S. forcibly relocated Native Americans as part of the Indian Removal Act of 1830. The Sequoyah state would include counties for every major tribe, and it would allow for the Native Americans to maintain their tribal government system to proceed without federal interference.

President Theodore Roosevelt decided instead to merge Sequoyah with Oklahoma territory, which was also being proposed for statehood. Oklahoma became a state in 1907.

Like Jefferson State, the State of Lincoln has gone through several iterations. Lincoln was first proposed in Texas since it was allowed to be split into four states upon entry into the United States. Lincoln would have consisted of the regions south and west of the Colorado River. The idea didn’t get much traction, though.

Next, the panhandle of what is now Idaho was considered for statehood under the name Lincoln. That quickly failed, and then in the early 20th century, the state of Lincoln was again proposed, this time in parts of eastern Washington state.

This one has a backstory. Vandalia was a proposed colony situated in parts of Kentucky and West Virginia. England never recognized it as a colony, so in 1776 it tried its hand at reforming into a state. The state would also include parts of Pennsylvania. The name they proposed was Westylvania. If passed, it would have been the 14th state. Congress didn’t pay attention to the proposal, and Pennsylvania (which housed most of the land that would have been Westylvania) soon passed a law stating that talking about secession and specifically the Westylvania movement would be considered treason and punishable by death. And so Westylvania quickly fizzled out of momentum and out of memory.

About a century before Bram Stoker would make the name Transylvania synonymous with vampires and darkness, it was the name of an unofficial 14th colony. It was comprised of parts of northern Tennessee and southeast Kentucky.

The name comes from the company that bought the lands from the Cherokee Indians, the Transylvania Company. Its owner, Richard Henderson, was hopeful that the land would be recognized by England and that he could rule it autonomously, much as William Penn did with Pennsylvania.

Turns out, the Transylvania Company actually bought the lands illegally according to British law. Two other territories had already laid claim to the land — North Carolina and Virginia. Virginia reclaimed the lands and the colony never officially existed.

Named after the Absaroka mountain range in the Rockies, this state was proposed in 1939. It was a combination of parts of South Dakota, Montana, and Wyoming who wanted to secede and form their own state. The proposal didn’t get as far as Congress, but they did make their own license plates and even held a beauty pageant. The timing wasn’t good, though, and the citizens of the would-be state lost interest with the start of World War II.

This is an odd addition to the list because it actually was a state — everyone just forgot about it. During the Civil War, Scott County in Tennessee seceded from its parent state to form the Free and Independent State of Scott because the people of Scott didn’t want to join the Confederate States of America. Scott maintained status as a Union state during the Civil War and was actually a state for 125 years.

The thing is, Tennessee didn’t do anything to stop Scott from seceding and pretty much forgot about the whole ordeal until 1986, when Scott requested to rejoin Tennessee. Tennessee agreed and even threw a celebration to welcome Scott back to their home state, which seems like an awfully nice gesture considering the state of Tennessee hadn’t ever officially recognized Scott as a state. Talk about awkward.

If you’ve ever been in Michigan’s UP (Upper Peninsula or just “up north” as the locals call it), you know that it’s an entirely different world up there. And so it seems reasonable that the citizens would have, at one point or another, considered becoming a separate state. The area has been proposed for statehood a few times but hasn’t had enough traction to get very far in the process.

The state of Franklin was just two votes away from becoming the 14th state. It was an autonomous territory in what is now Tennessee and was given to North Carolina from Congress in 1784 as a way to help the state pay off debts from the Revolutionary War (this was customary at the time). By 1789 North Carolina ceded the area back to the federal government to form the Southwest Territory and the state of Franklin dissolved.

Parts of southern California have been collaborating to attempt to secede from California and form their own state of Southern California. Government leaders did not take the thought very seriously, with the governor calling the movement “a supremely ridiculous waste of everyone’s time.”

The name makes sense since this state would have been made up of parts of Texas and Oklahoma. In 1935, 46 counties in northern Texas along with 23 counties in Western Oklahoma attempted to secede and form a new state. Their reasoning? Lack of road infrastructure in their states. Needless to say, the state of Texlahoma never came to be, mainly because Texans who lived in what would have been Texlahoma would have had to lose their status as Texans.

Fed up with northern Florida’s response to climate change, Miami passed a resolution to separate the state into two, South Florida and North Florida, in 2014. We’ll have to wait and see if this one will take hold, as statehood is a long and complicated process.