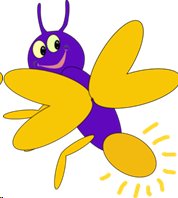 The weather is warm, the nights soft and the landscape is lit with little blinking lights coming from fireflies or lightning bugs.  Here in a fun article from mothernaturenetwork.com we find twelve facts you probably didn't know.

Fireflies make summer magical, but there's more to learn about these bioluminescent beauties.

Fireflies are cute and elegant by day, but downright dazzling at dusk.

There are many wonders to behold in the animal world, but few offer such enchantment as that of a summer evening punctuated with the twinkle of fireflies. It's a singular experience, like handfuls of Lilliputian stars tossed from the sky, falling to flit and hover among the grass and brambles. But behind their charming facade, fireflies are fascinating little insects. Consider the following facts:

1. They are beetles, not flies

Fireflies are nocturnal members of Lampyridae, a family of insects within the beetle order Coleoptera, or winged beetles. Yes, they are officially beetles. But we’re OK with the misnomer; “firebeetles” just doesn’t have the same ring to it. And bonus fact: the family name, Lampyridae comes from the Greek "lampein," meaning to shine … just like a lamp.

2. They are alchemists, poetically speaking at least

While they don’t actually turn base metals into gold, they do create light as if by magic. When a chemical called luciferin (note the same Latin root as Lucifer) inside their abdomen/tail combines with oxygen, calcium and adenosine triphosphate, a chemical reaction occurs that creates their spectacular light. (And then Mother Nature said, let there be bioluminescence!)

3. There are fireflies in the western United States, they just lack the “fire”

4. They are light geniuses

The light produced by the firefly is the most efficient light ever made. Almost 100 percent of the energy in the chemical reaction is emitted as light; in comparison, an incandescent light bulb only emits 10 percent of its energy as light, the other 90 percent is lost as heat.

5. They are flashy flirts

Each species has a specific pattern of light flashing, and males use this pattern to let the ladies of the same species know that they would be a fine match for one another. When a female notices a suitable suitor, she replies with her own species-specific flash. Females may also use flash information to decide which male to mate with. And then, fireworks!

6. Some species synchronize their flashing

As if fairy-like woodlands weren’t made wonderful enough by the glittering glow of fireflies, some species actually synchronize their flashes in a beautiful light show; hello, firefly disco! Scientists can’t say for sure why fireflies sync up, but it may be the result of competitive males trying to be the first to flash. Or likely, it is because flashing the species pattern in unison will ensure that females of the same species notice the gang of randy males. Photinus carolinus are the only species in America that flash simultaneously; one great place to see them is at the Great Smoky Mountains National Park which has firefly tours. Watch synchronus fireflies in action below. (Next stop: Vegas!)

7. They come in a rainbow of colors

Well maybe not the whole spectrum, but they do come in yellow, light red, green and orange.

Not that we were planning on snacking on fireflies anytime soon, but for predators that might like a light meal, beware the lightning bug. Firefly blood contains lucibufagins, which sounds like something out of a Harry Potter book but is actually a defensive steroid that tastes really gross. Predators associate the bad taste with a firefly’s light and learn not to eat bugs that glow.

9. They light up the underworld

Or underground, at least. While it's true that many an insect larvae lives underground, firefly babes have them beat in the "neat tricks" department; some species emit a subterranean glow. Among some species, even the eggs glow. Bizarre, right?

And then there are the freaky fireflies whose larvae live in the water; they have gills and sup on aquatic snails, before inching their way to terra firma for their next phase in life.

11. They have strange diets

Contrary to the storybook image of cute bitsy baby fireflies nibbling on flowers, the underground-dwelling larvae of the lightning bug are carnivorous and feast on slimy slugs, worms and snails. Once they grow up, some move on to cannibalism and eat other fireflies, but most subsist on pollen and nectar (while some don’t eat anything at all during their short lifetimes).

12. Their numbers are declining

If you’re seeing fewer fireflies each summer, you’re not alone. Anecdotal evidence suggests that firefly populations may be on the decline, most likely due to a combination of light pollution, pesticide use and habitat destruction. For example, according to Smithsonian.com, if a field where fireflies live is paved over, the fireflies don’t migrate to another field, they just disappear forever.