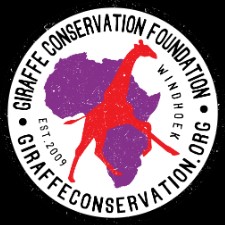 Permission to use:  Copyright © 2019 Giraffe Conservation Foundation, All rights reserved.
You opted in to receive these updates when visiting our website: https://giraffeconservation.org

Not only is it a worldwide celebration of these amazing and much-loved animals, but an annual event to raise support, create awareness and shed light on the challenges giraffe face in the wild according to thesafaricollection.com. By supporting World Giraffe Day (WGD), you directly help save giraffe in Africa. With only approximately 111,000 giraffe remaining in the wild, the time is right to act NOW!
Zoos, schools, NGOs, governments, institutions, companies and conservation organisations around the world are hosting events on or around 21 June every year to raise awareness and support for giraffe in the wild.  Check out who else is celebrating.

World Giraffe Day – 21 June 2019 – is dedicated to Twiga Tracker, the largest giraffe GPS satellite tracking programme ever in Africa (‘twiga’ is Swahili for giraffe).
Giraffe were listed as Vulnerable to extinction on the IUCN Red List of Threatened Species in 2016. Giraffe numbers in Africa have plummeted by a staggering 30% over the last 30 years.

We estimate today that there are only approximately 111,000 giraffe remaining in all of Africa.

To save giraffe in Africa, we need to gain a better understanding of where giraffe live, where they move and how they use their habitat. Twiga Tracker aims to track a minimum of 250 giraffe across their range with innovative GPS satellite solar units.
This is an ambitious goal – both logistically and financially. At a cost of USD2,500 per unit, deployment in remote areas of Africa will cost an estimated USD4,000-5,000 per unit – a total of more than USD1,000,000.

Twiga Tracker is a collaboration between some of the biggest names in field conservation and science: GCF has partnered with the Smithsonian Conservation Biology Institute and San Diego Zoo Global.

(Pictures from this web site: https://www.thesafaricollection.com/world-giraffe-day/)

21st June, according to janegoodall.org,  is the northern hemisphere’s longest day of the year! It is therefore very appropriate that on this day we celebrate the planets longest-necked animal… the graceful giraffe!

Giraffes tower over Africa’s plains. These tall animals are identified by their long necks, equally long and spindly legs, and spotted coats. Most giraffes have a tan, white or yellow coat that is spotted with brown, square shapes.  The world’s tallest animal can easily look into a second story window (like at Giraffe Manor in search of tasty treats). Its height to the “horn” tips averages 5.3 m (17.5 ft.) in males and 4.3 m (14 ft.) in females.

It is a less known fact that giraffe numbers all over Africa are under serious threat due to vanishing habitats and poaching. There are nine different subspecies of giraffe across Africa and there is growing evidence to suggest that some might be separate species in their own right. Six of the nine subspecies are endangered and their numbers are dropping every year. Three subspecies are found in Kenya, the Maasai Giraffe, the Rothschild’s Giraffe and the Reticulated Giraffe. The latter two are both highly endangered with fewer than 700 and 4000 left in the wild respectively. 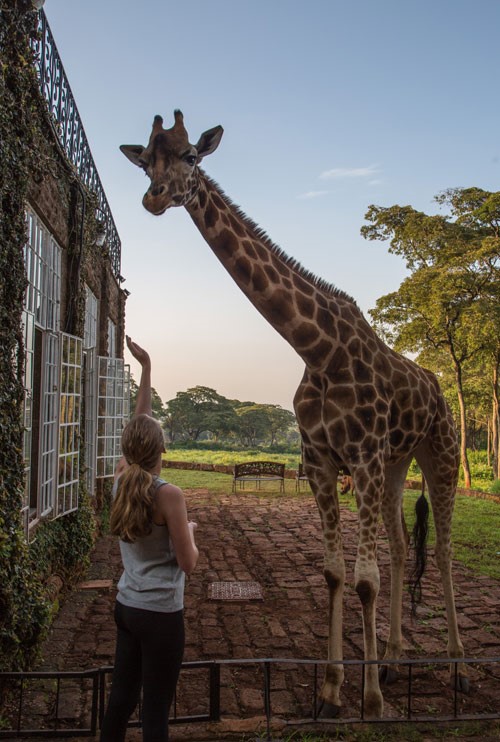 is one the most iconic hotels in the world but also plays a vital role in the conservation of Kenya’s Rothschild’s Giraffe. Before the Manor became a hotel it was a breeding centre for the highly endangered Rothschild’s Giraffe and it remains so to this day. It has played an integral part in the stabilisation of Rothschild’s Giraffe numbers and giraffes are frequently taken from the centre and released into the wild. The giraffes that come for breakfast are not pets but part of a very successful breeding programme, something that The Safari Collection is very proud to be a part of.

For each guest who stays at Giraffe Manor, The Safari Collection donates US$ 5 to AFEW, the African Fund for Endangered Wildlife who run the neighbouring Giraffe Centre and a number of important conservation programmes throughout Kenya. We are delighted to work with AFEW and congratulate them for their hard work and dedication to conserving such a magnificent species.

To praise these gentle giants, we want to introduce the giraffe family at Giraffe Manor and share their unique characteristics, beauty and quirky behaviours.

Daisy was born on 1st August 2009. Although she can be a bit cranky at times she is also incredibly gentle. Daisy is very large for a female and loves to be at the center of attention. Feed her giraffe treats, do not touch her face and she will be your best friend. She is the only giraffe that doesn’t like to kiss… not on the first date at least. 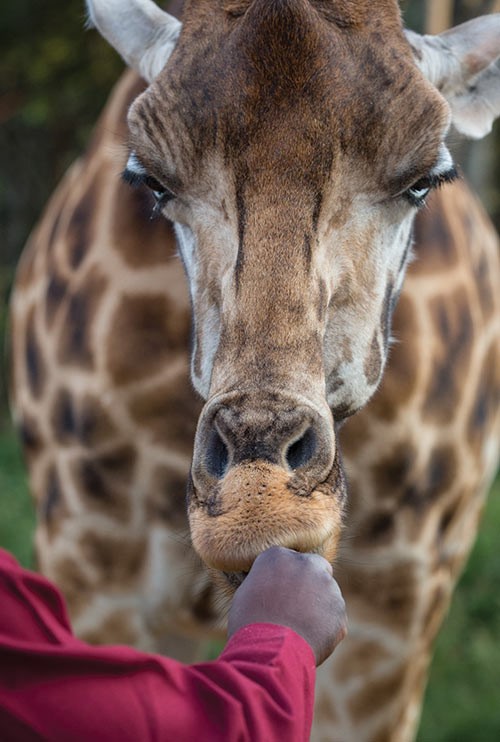 Margaret was born on the 4th November 2015 to Kelly and Edd. She has recently been named and is already a huge hit at feeding time. She has just started to come up but yet to put her head through the windows. She likes to kiss you even if don’t have pellets! You can touch her nose and pet her, unlike her mother. 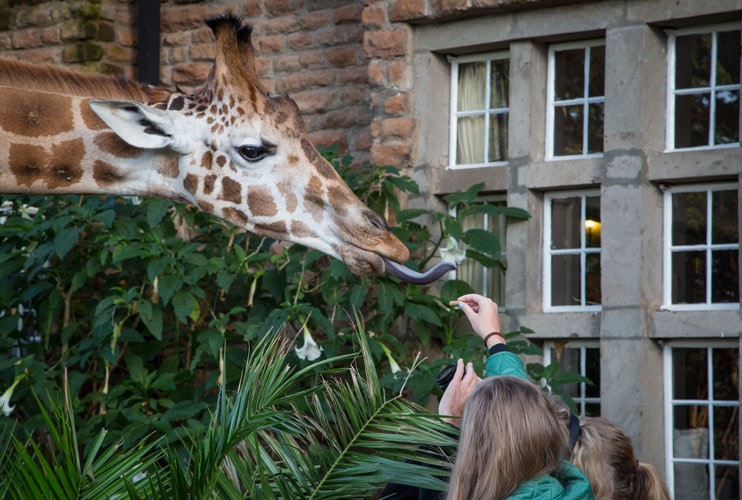 Edd is the biggest boy of the herd and the father of all the young offspring. Edd is Lynn’s son and was born on 11th July 2011. He is super tall and loves to feed from the balconies or the windows. Edd is a gentle giant and enjoys a hug whilst you feed him with your other hand. 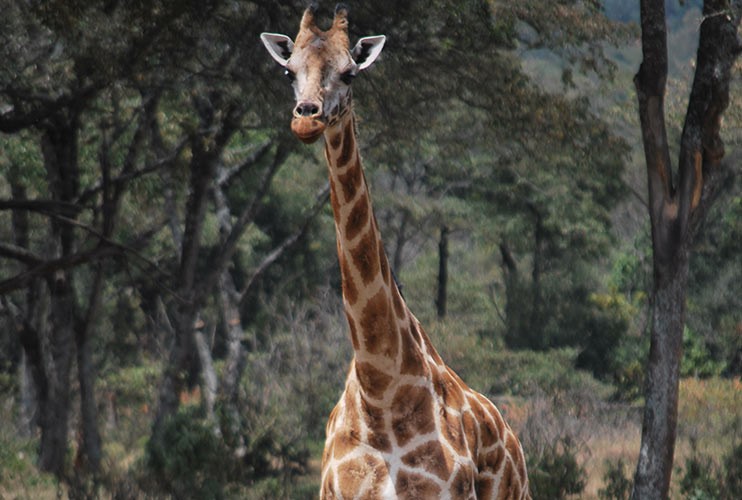 Selma was born on 13th November 2011. Just like her mum Betty, she stays close to the sanctuary but will come up to Giraffe Manor occasionally. Although Selma is shy she is tougher than she looks having been attacked by a lion in 2012! 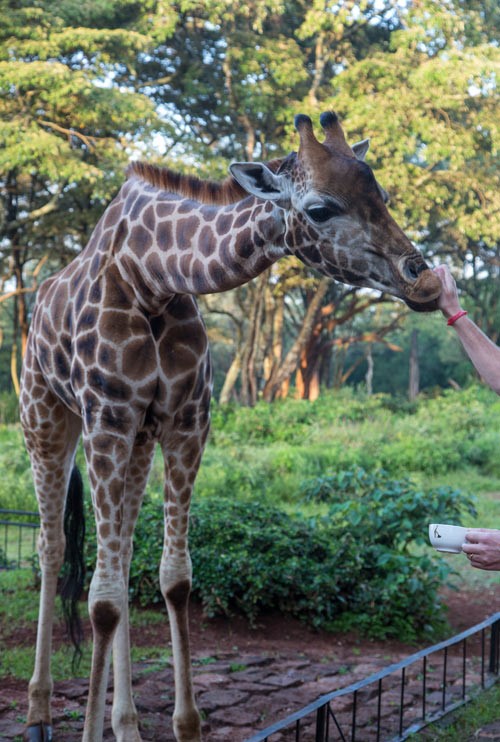 Stacy was relocated to the Giraffe Centre from Mwea Conservancy and is still very shy. A gentle soul, Stacy is very quiet and likes to go with the flow. She loves a giraffe pellet kiss and as she is just about to calf she is rather greedy at the moment. 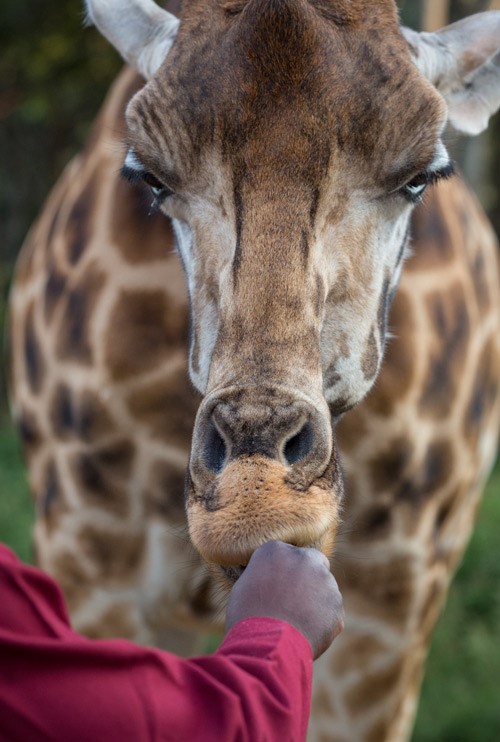 Kelly was born in August 2002. She is always the first up and last to leave for all feedings at the Manor. Kelly is the dominant female and lets everyone know about it. She loves to kiss and has incredible co-ordination when it comes to catching pellets between her lips. Don’t stand too close though, she also loves a cheeky ‘head-butt’ and has been known to ‘bump’ unsuspecting ‘selfie’ takers. 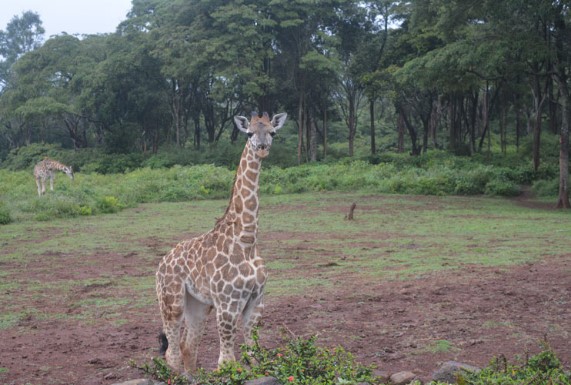 Our newest member of the giraffe herd is ‘Wee-One’ (yet to be officially named by AFEW). She was born on 26th April this year, daughter of Daisy III and Edd. Still drinking milk, she is yet to be fed or touched.

Kamata is the clown of the group! He is game for anything as long as you are feeding him tasty treats. He loves to climb the steps on the front lawn so he can look as tall as his dad Edd. He has a great personality and is easy-going and gentle. 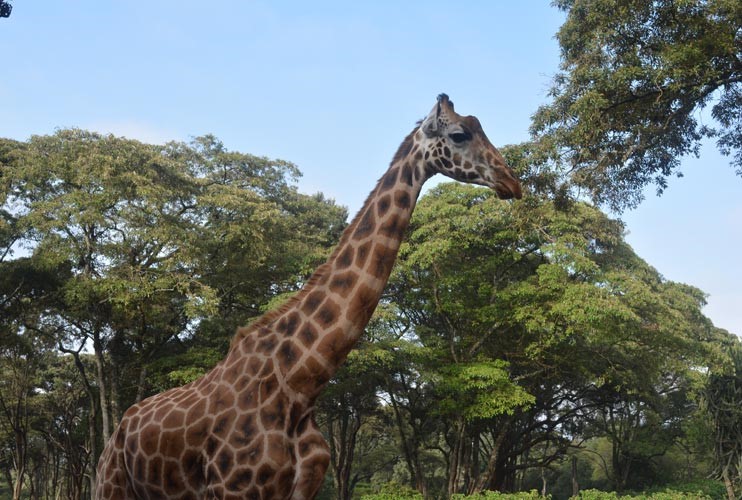 Born in 2000 near Lake Nakuru, Betty is the oldest of the Giraffe at the Manor. Betty does not come to the Manor so much; having been the matriarch for a long time she was ousted by Kelly last year when she gave birth.


Interaction with all of these gentle giants is a once in a lifetime experience not to be missed. Now that you have been introduced to them, why not book your trip to Kenya today to meet them first hand.

With their long necks and beautiful colors, giraffes are one of the most iconic African animals.  Despite their popularity, giraffes are currently facing severe declines in population.  Various wildlife protection groups have taken note of this and sought to get giraffes the protection they need.

However much you know giraffes, to see one in the wild for the first time feels prehistoric. — Dr. Jane Goodall

Why are giraffe populations declining?

Giraffe populations are decreasing due to multiple problems that are mainly human-caused.  Giraffes are commonly hunted for bushmeat, and their bones are carved and traded around the world. In addition to these direct threats to the animals, deforestation, loss of habitat, and fragmentation are also harming the giraffe populations.  With less places to live, less food to eat, and less interaction between groups, giraffes as a species are confronted with serious obstacles that with time could get worse.
How will being on the Endangered Species List help giraffes?


Faced with new data revealing that giraffe populations have declined by almost 40% over the past 30 years, groups such as the International Fund for Animal Welfare and the Humane Society International have petitioned the U.S. Fish and Wildlife Service add giraffes onto the Endangered Species List.  Not only would this help spread the word about the trouble the giraffes are in, but it would also put in place some helpful protections.  By classifying giraffes as endangered, the U.S. would ban most imports of giraffe parts and trophies.  This would restrict domestic trade and discourage people from trophy hunting giraffes.

What can you do?

The U.S. Fish and Wildlife Service has 90 days to either add the giraffe or not to the list.  Keep an eye out for possible news about whether the petition was granted or not.  Also, be sure to spread the word about the plight of giraffes for awareness is key to create change.  Currently about 97,000 giraffes live in the wild (a sharp decrease from the 151,000-163,000 that inhabited the world in 1985), and it is vital that we take notice to make sure the animals we love receive the protection they need.