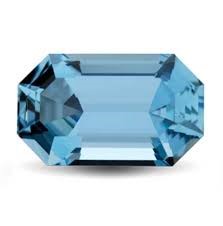 The Aquamarine
"A March born shall always be
Soothed by Aqua, gem of sea
This mermaid's treasured stone you wear
Will bring happiness, love, affection and care."
~~Anonymous (Victorian gemstone poem)

For those who were born in the month of March the Aquamarine is the traditional birthstone according to birthdaygems.org. The poem echoes some of the things with which the Aquamarine is associated - faithfulness, courage and friendship. The traditional metaphysical properties for the Aquamarine are awareness, quick response and easing communication problems. The healing properties of this birthstone are reputed to affect health problems relating to throat problems and stress-related illnesses.
Ancient seers considered it to be under the influence of the moon, an orb exerting very great magnetic influence. Present day supporters of crystal-gazing suggest that when using an Aquamarine to view coming events, do so when the moon is increasing. The magnetism of the moon on the included iron oxides will strengthen the stone's forecasting ability.

The Aquamarine is considered to be the birth stone for Pisces (The sign of the Fish) and relate to those born between February 20 and March 20. The Zodiac sign of Pisces also responds to Amethyst, Ruby, Bloodstone and Jasper.

The popular March birthstone is found in the following countries:  Brazil, Nigeria, Zambia, Madagascar and the Ukraine.

The traditional color associated with the Aquamarine is a transparent blue or sea-green. The most admired aquamarine color, however, is sky-blue. The meaning of colors through the ages represented many aspects of life. Social, religious, biblical and Christian symbolism were all reflected in the color blue! The symbolic Biblical meaning of the color blue symbolizes heavenly grace.

The aquamarine, was thought to cure heart, liver, and stomach diseases—all one had to do was drink the water in which the gem had been soaking. Early sailors believed that aquamarine talismans, etched with the likeness of the sea god Neptune, protected them against ocean dangers.