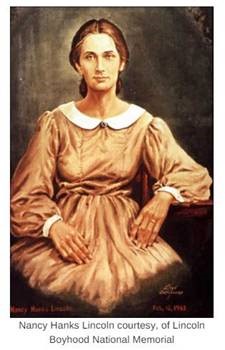 Nancy Hanks Lincoln (February 5, 1784 – October 5, 1818) was the mother of U.S. President Abraham Lincoln according to wikipedia.com. Her marriage to Thomas Lincoln also produced a daughter, Sarah, and a son, Thomas Jr. When Nancy and Thomas had been married for just over 10 years, the family moved from Kentucky to Perry County, Indiana in 1816. Nancy Lincoln died from milk sickness at the Little Pigeon Creek Community in Spencer County when Abraham was nine years old.

Nancy Hanks Lincoln was born to Lucy Hanks in what was at that time part of Hampshire County, Virginia. Today, the same location is in Antioch in Mineral County, West Virginia. Years after her birth, Abraham Lincoln's law partner William Herndon reported that Lincoln told him his maternal grandfather was "a well-bred Virginia farmer or planter." According to William E. Barton in the "Life of Abraham Lincoln" and Michael Burkhimer in "100 Essential Lincoln Books", Nancy was most likely born illegitimate due to the fact that Hanks' family created stories in order to lead Abraham to believe he was a legitimate member of the Sparrow family.

It is believed that Nancy Hanks Lincoln's grandparents were Ann and Joseph Hanks and that they raised her from infancy until her grandfather died when she was about 9 years old. At the time of Nancy's birth, Joseph and his wife and children were all living on 108 acres near Patterson Creek in then-Hampshire County, Virginia. In March 1784, Joseph Hanks sold his property via a mortgage and moved his wife, 8 children, and young granddaughter Nancy to Kentucky.

The family lived on land along Pottinger's Creek, in a settlement called Rolling Fork in Nelson County, Kentucky, until patriarch Joseph's death in 1793. Nancy's grandmother, who was called by the more formal name Ann rather than its common nickname Nancy, decided to return to her homeland, old Farnham parish in Virginia. At that time, Nancy went to live with her mother, now Lucy Hanks Sparrow. having married Henry Sparrow in Harrodsburg, Kentucky two or three years earlier.

After Lucy's sister Elizabeth Hanks married Henry Sparrow's brother Thomas in Mercer County, Kentucky in 1796, Nancy went to live with the couple, whom she called "mother and father"; she was known as Nancy Sparrow and described as "intelligent, deeply religious, kindly and affectionate." Lucy's sister Nancy Hanks gave birth to an illegitimate son in 1799 named Dennis Friend Hanks, Nancy Hanks Lincoln's cousin, who was also raised by Elizabeth and Thomas Sparrow.

At the home of Elizabeth and Thomas Sparrow, Nancy would have learned the skills and crafts a woman needed on the frontier to cultivate crops and clothe and feed her family. She learned to read by the Bible and became an excellent seamstress, working at the Richard Berry home before her marriage.

Lucy's marriage to Henry Sparrow produced 8 children, and Lucy had a reputation as a "fine Christian woman". Two sons were loyal to the Union during the Civil War and were preachers.

(1) It's unclear if Nancy Hanks lived the entire three years (1793-1796) with her mother prior to moving in with her aunt, Elizabeth Hanks and newly married uncle, Thomas Sparrow.

(2) It is unclear when Nancy went to work for the Berrys.

Rear of the Lincoln Marriage Temple, which shelters the cabin in which Thomas Lincoln married Nancy Hanks. Built in 1931, it is part of Old Fort Harrod State Park in Harrodsburg, Kentucky

On June 12, 1806, Hanks married Thomas Lincoln at Beechland, the home of Richard Berry, by Reverend Jesse Head. Nancy was brought to the home to work as a seamstress by her friend Polly Ewing Berry, the wife of Richard Berry Jr. since October 10, 1794. Polly was a friend of Nancy's from Mercer County, Kentucky and Richard Berry, Jr. was a good friend of Thomas Lincoln. Lincoln proposed to her in his childhood home at what is now Lincoln Homestead State Park or in the Francis Berry house in front of the fireplace.

Nancy's marriage bond was signed by Richard Berry, Jr. who identified himself as her guardian. Per Warren, "The title had no legal significance, Berry having never been so appointed, and Nancy Hanks was then of age. But of him to call himself 'guardian' was a courtesy customary under such circumstances" [no father able to sign the marriage bond]. A record of their marriage license is held at the county courthouse.

They had three children:

The young family lived in what was then Hardin County, Kentucky (now LaRue). After 1811, on the Knob Creek Farm. Neighbors reported that Nancy Hanks Lincoln was "superior" to her husband, a mild yet strong personality who taught young Abraham his letters as well as the extraordinary sweetness and forbearance he was known for all his life. In 1816, the year that Indiana became the 19th state, the Lincoln family moved to Spencer County in southern Indiana and proceeded to homestead at Little Pigeon Creek Settlement (now Lincoln Boyhood National Memorial). Elizabeth and Thomas Sparrow and Dennis Hanks settled at Little Pigeon Creek the following fall, having lived in a shelter the Lincolns had lived in until they built their cabin. While Abraham was ten years younger than his second cousin Dennis, the boys were good friends.

She was above the ordinary height in stature, weighed about 130 pounds, was slenderly built, and had much the appearance of one inclined to consumption. Her skin was dark; hair dark brown; eyes gray and small; forehead prominent; face sharp and angular, with a marked expression for melancholy which fixed itself in the memory of all who ever saw or knew her. Though her life was clouded by a spirit of sadness, she was in disposition amiable and generally cheerful.

Nancy was also described as "a bold, reckless, daredevil kind of woman, stepping on to the very verge of propriety."

Lincoln gained from his mother his appearance and manner. She was "mild, tender, and intellectually inclined."

Nancy Hanks Lincoln Gravestone
While living at Little Pigeon Creek Settlement, Nancy Hanks Lincoln died on October 5, 1818, age 34. Her 9-year-old son Abraham assisted his father in the making of her coffin by whittling the wooden pegs that held the planks together. 11-year-old Sarah cared for Abraham until their father remarried the next year.

There are two views as to the cause of Nancy Hanks Lincoln's death. One view is that she died of "milk sickness." Several people died that fall from the illness, including Elizabeth and Thomas Sparrow, who raised her and then lived with her on the Lincolns' property at the Little Pigeon Creek settlement. The Sparrows died in September, weeks before Nancy's death, and Dennis moved in with the Lincolns. The illness was caused by drinking the milk or eating the meat of cows that had eaten white snakeroot. The plant contains the potent toxin temetrol, which is passed through the milk.[35] The migrants from the East were unfamiliar with the Midwestern plant and its effects. In the nineteenth century before people understood the cause of the illness, thousands in the Midwest died of milk sickness.

The second view is that Nancy died of consumption. In 1870 Lincoln's law partner and biographer, William Herndon, wrote to fellow Lincoln biographer Ward Lamon saying that "Mrs. Lincoln died as said by some with the milk sickness, some with a galloping quick consumption",  i.e. a wasting disease or tuberculosis. This, with the recent demonstration that Nancy had a marfanoid body habitus and the same unusual facial features as her son, would suggest that she died of cancer (which is a wasting disease) related to multiple endocrine neoplasia type 2b (MEN2B), and that she passed the gene for this syndrome to her son (see Medical and mental health of Abraham Lincoln).

Nancy's grave is located in what has been named the Pioneer Cemetery, also known as the Nancy Hanks Lincoln Cemetery. Her headstone was purchased by P.E. Studebaker, an industrialist from South Bend, in 1878. At least twenty unmarked and eight marked graves are at the site; Nancy Lincoln is buried next to Nancy Rusher Brooner, a neighbor who died a week earlier than she from milk sickness. Henry Brooner, Nancy Brooner's son and best childhood friend of Abraham Lincoln later recalled, "I remember very distinctly that when Mrs. Lincoln's grave was filled, my father, Peter Brooner, extended his hand to Thomas Lincoln and said, 'We are brothers now', meaning that they were brothers in the same kind of sorrow. The bodies of my mother and Mrs. Lincoln were conveyed to their graves on sleds." Her aunt and uncle, also her childhood caregivers, Elizabeth (Hanks) and Thomas Sparrow are buried nearby. The cemetery is located on the grounds of the Lincoln Boyhood National Memorial, a National Historic Landmark District managed by the National Park Service in present-day Lincoln City, Indiana.

Memorial to Nancy Hanks in Mineral County, West Virginia, at the site of her birth.

In 1941, Katherine K. Davis, who co-wrote the lyrics to "The Little Drummer Boy", wrote the music for the ballad "Nancy Hanks" as a tribute to Lincoln's mother. The song uses as its lyrics the Rosemary Benét poem "Nancy Hanks" (originally published in Stephen Vincent Benét's A Book of Americans): An edited version of the poem was used by John Ford in the beginning of his 1939 movie Young Mr. Lincoln:

If Nancy Hanks
Came back as a ghost,
Seeking news
Of what she loved most,
She'd ask first
"Where's my son?
What's happened to Abe?
What's he done?"... ...
"You wouldn't know
About my son?
Did he grow tall?
Did he have fun?
Did he learn to read?
Did he get to town?
Do you know his name?
Did he get on?"

On February 12, 2009, on the bicentennial of the birth of Abraham Lincoln, the West Virginia House of Delegates passed a resolution recognizing Nancy Hanks Lincoln for her contributions and her birth site in Mineral County, West Virginia.

The Nancy Hanks – Thomas Lincoln wedding was portrayed in a play called "Dearly Beloved: The Vows of a Lincoln Legacy" to kick-off a three-year bicentennial celebration of Abraham Lincoln's life. The play was held at the Lincoln Homestead State Park in Springfield, Kentucky.

Nancy is portrayed by Maria Hill in the Daniel Boone episode "Before the Tall Man."