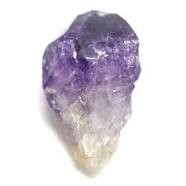 The Amethyst is also referred to as the "sobriety stone" as it was once believed to prevent drunkenness and used to treat alcoholism and other types of addictions.
February Zodiac Sign - The twelve Zodiac signs are an astrological version of birthstones in addition to the twelve calendar months. The February birthstone, the Amethyst, is considered to be the birth stone of Aquarius (the Water Bearer) and relate to those born between January 21 - February 19. The Zodiac sign of Aquarius also responds to Garnet and Jasper.