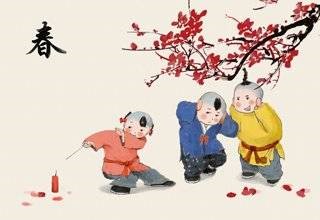 Facts, Myths, And More from chinesenewyear.net

Chinese New Year is celebrated by more than 20% of the world. It’s the most important holiday in China and to Chinese people all over. Here are 21 interesting facts that you probably didn’t know about Chinese New Year.

1. Chinese New Year is also known as the Spring Festival
In China, you'll hear it being called chunjie (??), or the Spring Festival. It’s still very wintry, but the holiday marks the end of the coldest days. People welcome spring and what it brings along: planting and harvests, new beginnings and fresh starts.

You can also call it the Lunar New Year, because countries such as North and South Korea and Vietnam celebrate it as well. And because the Spring Festival goes according to the lunar calendar. Which means . . .

2. There's no set date for Chinese New Year
According to the Lunar calendar, the Spring Festival is on January 1st and lasts until the 15th (the full moon). Unlike western holidays such as Thanksgiving or Christmas, when you try to calculate it with the solar (Gregorian) calendar, the date is all over the place.

Modern Chinese calendars use the Gregorian calendar but include lunar holidays.

The lunar calendar is still really important in China, even though it has officially moved to the Gregorian calendar like the rest of the world. All traditional holidays and days such as the Winter Solstice are celebrated. Some people still calculate their birthdays and ages according to the lunar calendar too!

3. It is a day for praying to gods

The Spring Festival was originally a ceremonial day to pray to gods for a good planting and harvest season. As an agrarian society, the harvest was everything. People also prayed to their ancestors, as they were treated as gods (see Mulan for reference).

The best foods are offered to the gods.

4. and fighting off monsters

But the myths are much more interesting. According to one legend, there was a monster named Nian (?). It would come about every New Year’s Eve. Most people would hide in their homes. But one boy was brave enough to fight him off using firecrackers. The next day, people celebrated their survival by setting off even more firecrackers. And that practice became a crucial part of the Spring Festival.

5. The most fireworks are set off in the world that night

Both firecrackers and fireworks sound throughout the night.

That same night, families also burn fake paper money and printed gold bars in honor of their deceased loved ones. Similar to the Korean Chuseok holiday or the Mexican Day of the Dead traditions, they believe the offerings will bring fortune and good luck to their ancestors in the afterlife.

Due to safety reasons and concerns for air pollution, many Chinese cities have banned fireworks. More than 500 cities have restrictions too.

But... many people don’t care and they do it anyway. Beijing had banned fireworks for 13 years. The ban was lifted in 2006 because of the angry public.

If you’re in China during this time, you’ll probably be able to hear and see the explosions for at least 3 nights (and it can go on for weeks).


7. It is the longest Chinese holiday
The Spring Festival is technically 15 days. But celebrations start on New Year’s Eve (making it 16 days). You can also say that the holiday season starts in (lunar) December with the Laba Festival (???—lŕ b? jié). That’s around 40 days of celebrations!

Chinese New Year shopping mall
During the holiday, Chinese people spend twice as much on shopping and eating out than Americans spend on Thanksgiving.
Traditionally, you have to spend time with your family and can only go out after the 5th day. It’s a national holiday. The large majority of stores are closed too.

So in the month before, people will buy nian huo (??), or New Year’s products. The Chinese stock up on cooking supplies, snacks, gifts, new clothes and more.

8. The Spring Festival causes the largest human migration in the world
The most important part of Chinese New Year is the family reunion. Everyone should come back home for the New Year’s Eve dinner.

But since in modern China, most elderly parents live in rural villages while their children work in the cities. The migration back home and to go on vacation is called chunyun (??), or Spring Migration.

Chinese New Year subway station
Even on normal days, subways to work are jammed pack with people just barely squishing past the door. You can imagine the intensity of the chunyun.
Plus, the earliest you can buy train tickets is 60 days before. It leads to a mad rush of literally fighting for tickets. In 2015, statistics showed that around 1,000 tickets were sold each second.

9. Singles hire fake boy/girlfriends to take home
You know those nosy relatives during Thanksgiving? It's even worse in China. Especially since having children and passing down the family name is one of the most important parts in Chinese culture.

Some desperate singles resort to hire a fake boyfriend or girlfriend to take home. Those who can’t (or don’t want to) go home can rent themselves out. For some of the other questions though, such as your salary, career or when you want to have kids, can’t be helped.

On the other hand, there’s a day before the Spring Festival dedicated to cleaning. This day is to sweep the bad luck away and make room for the good.

Hair cutting (before February 2)
Using scissors, knives and other sharp things
Arguing, swearing
Saying unlucky words (such as “death” and “sickness”)
Breaking things
Check out our full list of taboos to learn more.

Chinese New Year red pockets with lucky money
Depending on the family, the children can get up 1000 CNY (around $150) per envelope.
Also called red packets or pockets, they include money. This money is supposed to help transfer fortune from the elders to the kids. They can also be given between bosses and employees, co-workers, and friends.

With the development of technology, digital red pockets are the trend now. People like to send one into group chats and watch the others fight for the money. This is called qiang hongbao (???), or literally “snatching red pockets”.

12. You eat dumplings for every meal, every day
Well, technically you’re supposed to. But not many people do that anymore because you can have too much of even the most delicious foods. So most people will eat dumplings during the New Year’s Eve dinner. Others will eat them for the first breakfast.

Chinese New Year desserts
Make sure you get your fill of meaningful desserts!
Take the tangyuan for example. It literally means “soup balls.” But it sounds like tuanyuan (??), which means reunion. So it’s no surprise it’s a popular dessert during Chinese New Year.

Nian gao (??) is a type of rice cake. It symbolizes success each and every year.

Fa gao (??) is a the hybrid of sponge cakes and muffins. People dye it festive colors. The fa is the same as in fa cai (??), which means “to get rich.” And everyone wants that!

Isn’t it nice to have a better reason to get seconds?

14. There's wine specifically for the Spring Festival
Chinese people love drinking. There’s a saying that there’s no manners and/or etiquette without wine. This means that you need to have wine for every ceremony, festival or important dinner.

There’s wine for engagement dinners, weddings, birthdays... and of course, the Spring Festival. With such a rich wine culture, it’s no surprise that there is a bunch of drinking games you play. However, it’s not all fun and games.

When you’re eating with someone older than you, as is the case with New Year’s dinners, you need to follow strict toasting etiquette rules. They include the order of toasts, seating, how you hold the wine glass etc. etc. To learn more read our post on Chinese New Year's drinks and etiquette.

15. The Chinese decorate everything red for Chinese New Year
Every family will deck their homes in this color. Do you remember the story about Nian? Firecrackers aren’t the only thing that scared the monster away. Red is also an invaluable weapon, and used in nearly all Chinese New Year decorations.

Chinese New Year dragon decorations
Red is China's favorite color and it's pretty obvious during Chinese New Year.
The Chinese will hang up red lanterns and strings of (real or fake) chili peppers, paste red paper onto doors and windows, and more!

New clothes are also believed to bring good luck and start over fresh. People will add new red clothing to their Spring Festival wardrobe too.


16. Every year has a zodiac animal
Western horoscopes include 12 zodiacs, one for each month. There are 12 Chinese zodiacs as well, but the animal is for the entire year.

Chinese New Year zodiac animals
They are: Rat, Ox, Tiger, Rabbit, Dragon, Snake, Horse, Goat, Monkey, Rooster, Dog and Pig
2019 is the year of the pig. Some of the animals (such as Rat, Snake, Dog and Pig) aren’t normally well-liked in Chinese culture. But as a zodiac, their positive traits are bestowed on people born that year.

They play a much bigger role than in Western cultures. Your animal can decide your career, health and relationship success. Make sure you find out what zodiac animal you are!

17. Your zodiac year is bad luck
Your benming year (???—b?n měng nián) is the year of your zodiac animal. And of the 12 year cycle, it is the unluckiest for you.

There are multiple explanations for this. The Chinese believe that children can easily be taken by demons. And your benming year is your rebirth year.

There’s also a mythological creature named Pi Xiu (??) that you can wear as an accessory for good luck.

During this year, your weapon of defense is the color red. Just as you can decorate your home in red for protection and fortune, you can also wear red clothing. Many people will wear red underwear every day of the year. Others add on red shirts, pants, jewelry, insoles and more!

18. You grow 1 year older on the Spring Festival

In China, you have a “real” age (??—shí suě) and a “fake” nominal age (??—x? suě). The real age is the one we all know about. You grow one year older on your birthday. The nominal age though, increases with the Spring Festival.

This was the age most people went with until recent times. But it’s still common nowadays, or used interchangeably. If you’re particular about it, make sure you ask!

The phrase literally means “Happy New Year.” But in Hong Kong and other Cantonese-speaking regions, it's more common to say “gong hei fat choy.” In Mandarin Chinese, it's “gong xi fa cai” (????). It means “congratulations on the fortune.”

If you check out other greetings or blessings, you’ll see that most are about:

Food, money and health are things that everyone wants. Passing down the family name is of utmost importance. That’s one of the reasons why China has such a large population.

The first full moon of the (lunar) year is the Yuanxiao Festival (???—yuán xi?o jié) or Lantern Festival (??—d?ng jié). Though family is still important, it’s still a night of partying and freedom.

Lanterns come in all shapes, sizes and colors.

In ancient times, girls weren’t allowed to venture outside by themselves. But on this night, they were able to walk around, moon-gaze and look at the beautiful lanterns. Because of this, it’s also known as Valentine’s Day in China.

21. Chinese New Year is celebrated all around the world
One out of every 5 people in the world is Chinese. But that stat doesn’t include the millions of overseas Chinese and people of Chinese descent.

London, England; San Francisco, USA; Sydney, Australia; all claim to have the biggest Spring Festival celebrations outside of Asia. We’re can’t say if that’s true or not. But if you have a Chinatown nearby, you can definitely get a feel of what the celebrations are like.

Make sure you go check out the parades, lion dances, lantern statues, fireworks and amazing food!