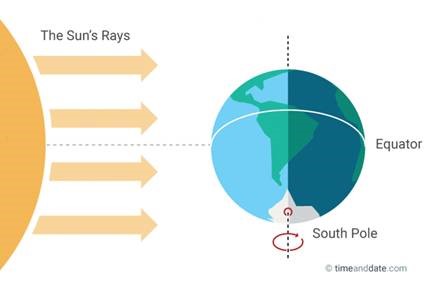 Image: Illustration of Earth’s position in relation to the Sun’s rays – timeanddate.com

There are two equinoxes every year – in September and March – when the sun shines directly on the equator and the length of day and night is nearly equal according to timeanddate.com.

Seasons are opposite on either side of the Equator, so the equinox in September is also known as the autumnal (fall) equinox in the Northern Hemisphere, and is considered the first day of fall.

In the Southern Hemisphere, it is known as the vernal (spring) equinox and marks the first day of spring.

September Equinox in Universal Coordinated Time is on Sunday, September 23, 2018 at 01:54 UTC

The September equinox occurs the moment the Sun crosses the celestial equator – the imaginary line in the sky above Earth’s Equator – from north to south. This happens either on September 22, 23, or 24 every year.

10 Facts About the First Day of Fall

On September 22/23, 2018, the day and night will be almost equal in most locations. Here are 10 facts about the first day of astronomical fall (autumn) in the Northern Hemisphere.

1.Second Equinox of the Year

The September equinox is on or around September 22, while the first equinox of the year, the March Equinox, takes place on or around March 21 every year.

...in the Northern Hemisphere. Astronomically, the September equinox is the autumnal, or fall, equinox marking the end of summer and the beginning of fall (autumn). The fall season ends on December Solstice, when astronomical winter begins.

For meteorologists, on the other hand, fall in the Northern Hemisphere begins about 3 weeks before the September equinox on September 1 and ends on November 30.

In the Southern Hemisphere, the September equinox is the vernal (spring) equinox.

The September equinox is also known as the vernal or spring equinox in the Southern Hemisphere and is considered by astronomers as the first day of spring there.

Equinoxes are not day-long events, even though many choose to celebrate all day. Instead, they occur at the moment the Sun crosses the celestial equator – the imaginary line in the sky above Earth’s Equator.

At this instant, Earth's rotational axis is neither tilted away from nor towards the Sun.

Earth's axial tilt is to blame

In 2018, the Sun's crosses the celestial equator from north to south on September 23, at 01:54 UTC. Because of time zone differences, the equinox will take place on September 22, 2018 at locations that are at least 2 hours or more behind UTC. These include some cities in Greenland, all of Canada, the United States and South America.

While the September equinox usually occurs on September 22 or 23, it can very rarely fall on September 21 or September 24. A September 21 equinox has not happened for several millennia. However, in the 21st century, it will happen twice – in 2092 and 2096. The last September 24 equinox occurred in 1931, the next one will take place in 2303.

The equinox dates vary because of the difference between how the Gregorian calendar defines a year (365 days) and the time it actually takes for Earth to complete its orbit around the Sun (about 365 and 1/4 days).

This means that each September equinox occurs about 6 hours later than the previous year's September Equinox. This eventually moves the date by a day.

The term equinox comes from the Latin words aequus, meaning equal and nox, meaning night. This has led to the common misconception that everybody on Earth experiences equal day and night – 12 hours of daylight and 12 hours of night time – on the day of the September equinox.

In reality, most places on Earth enjoy more than 12 hours of daylight on this day. This is because of two reasons: the way sunrise and sunset are defined and atmospheric refraction of sunlight.

Locations that are not on the equator do get to experience equal day and night twice a year, usually a few days before or after the equinoxes. The dates for this event, which is also known as equilux, depend on a location's latitude – those closer to the Equator celebrate it a few days before the equinox.

The full Moon closest to the September equinox, the Harvest Moon, is astronomically special. This is because the time between one moonrise to another around this period becomes shorter.

On average, the Moon rises about 50 minutes later every day in a lunar month – the time period between two Full Moons or two New Moons. Around the Harvest Moon, the time difference between two successive moonrises decreases to less than 50 minutes for a few days.

Known as the Harvest Moon Effect, this phenomenon occurs due to the low angle the Moon's orbit around Earth makes with the horizon during this time of year.

The reverse effect occurs in the Southern Hemisphere, where the Moon rises more than 50 minutes later than on the previous day.

In the old days, the early moonrise for a few days around the equinox in the Northern Hemisphere meant that farmers could work and harvest their crops for a longer time in the evenings.

As the September equinox rolls by, the chances to see the aurora borealis display increases for those located at high Northern Hemisphere latitudes. According to NASA, the equinoxes are prime time for Northern Lights – geomagnetic activities are twice more likely to take place in the spring and fall time, than in the summer or winter.

10. Celebrated Around the World

Many cultures around the world hold feasts and celebrate festivals and holidays to mark the September equinox.
Earth's Axial Tilt

Earth's axis is tilted at an angle of about 23.4° in relation to the ecliptic, the imaginary plane created by Earth's path around the Sun.

On any other day of the year, either the southern hemisphere or the Northern Hemisphere tilts a little towards the Sun. But on the two equinoxes, the tilt of Earth's axis is perpendicular to the Sun's rays, like the illustrations show.

Why Is it Called "Equinox"?

On the equinox, night and day are nearly exactly the same length – 12 hours – all over the world. This is the reason it's called an "equinox," derived from Latin, meaning "equal night." However, even if this is widely accepted, it isn't entirely true. In reality, equinoxes don't have exactly 12 hours of daylight.

In the Northern Hemisphere, the September equinox marks the start of fall (autumn). Many cultures and religions celebrate holidays and festivals around the equinox.

The Snake of Sunlight

A famous ancient equinox celebration was the Mayan sacrificial ritual by the main pyramid at Chichen Itza, Mexico. The pyramid, known as El Castillo, has 4 staircases running from the top to the bottom of the pyramid's faces, notorious for the bloody human sacrifices that used to take place here. The staircases are built at a carefully calculated angle which makes it look like an enormous snake of sunlight slithers down the stairs on the day of the equinox.