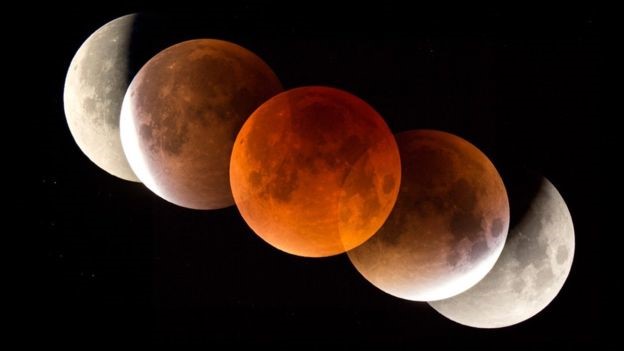 The Full Buck/Blood Moon lunar eclipse today falls at 4ş Aquarius 44' makes a striking T-square with Mars square Uranus according to darkstarastrology.com, and will be the longest total lunar eclipse of the 21st Century. The eclipse will last 1 hour and 43 minutes, during which Earth's natural satellite will turn a spectacular red or ruddy-brown color. From start to finish, the entire celestial event will last nearly 4 hours.

The eclipse is conjunct the fixed star Dahib in the head of the goat and Giedi which are the two stars in the goats horns. This lunar eclipse speaks of the youthful tendency to live in the moment and become a slave to Venus and her tempting baubles. When we are young we want to gorge all the sweets in the shop without thinking of the consequences, when we are older we learn the value of deferred gratification. The solar eclipse makes a promise, that if you do indeed make a sacrifice, then you shall be handsomely rewarded.

The T-square activated by the lunar eclipse July is really sitting on a knife edge. Events occur that are just downright peculiar. The tension can push people to do something really reckless and the risk of accidents is very high. Help is at hand with the mature and modulating trine from Saturn. Age and wisdom are the only way to rein in the fast, furious and rebellious nature of Mars square Uranus. Hopefully, Saturn can tactfully steer the raw impetuous energy into something constructive. Put on your safety goggles!

The needy embryonic Moon is not comfortable in a decan that is so much about cutting the umbilical cord to freedom. It is also one that will tend to rebel against its mother country and feel at odds in whatever home they find themselves. The Moon here is continually searching for the ‘Promised Land’ but rarely finds it. This New Moon Aquarius 1 is so idealistic, that it finds squaring its high expectations with earthly domestic reality extremely hard.

However, by the end of the month, any alienation that is felt matures into great self-sufficiency. The ability to look after oneself then is in turn bestowed upon the various waifs and strays that this New Moon can attract. At this time we might find ourselves providing temporary accommodation for those making difficult life transitions. A cosmic home is found amongst other outsiders.

A Lunar Eclipse is a super menstrual, wolf-howler version of a full moon. It will do a great job of purging and releasing things from our lives that no longer serve our higher selves. The bright light of the sun throws a spotlight on our subconscious to illuminate any issues within our primary relationships that have been festering there since the previous Solar Eclipse. With the Lunar eclipse, the earth comes between the Sun and the moon.

Sometimes we get a blood red moon as the earth’s shadow slowly creeps across its crater face. Depending on how things have gone in the last 6 months, we can now see the fruit blossom from the seeds we planted at the last solar eclipse. But if life has been stressful for us, putting pressure on those embryonic seeds, then what should be a birthing time can sadly turn into a miscarriage. Your personal lunar experience and how you handle change, in general, depends on how the eclipse is configured to your chart.

The effect of a lunar eclipse can last up to three months. This can be a sombre, but cleansing and healing time or a joyous, birthing time. Eclipses get their bad reputation because humans are creatures of habit and become upset by the unexpected. If you have been stubbornly resisting growth, you could experience the Lunar eclipse as really volcanic. The violent energy that desperately needs to be purged, shouldn’t be dreaded.

Lunar eclipses are extremely emotional times, therefore we just really need to sit down quietly and listen to what comes up, for our feelings are our psychic barometer. Unashamedly ball your eyes out if you have to and allow red eyes with this blood red moon. Don’t fear the tears for they are sacred salty purification. Solar & Lunar Eclipse list of eclipse paths and lunar shadows.

Although this Lunar eclipse occurs in tropical Aquarius, visually it falls in the sidereal constellation of Capricorn. If you look up at the sky at this blood red eclipse, you will see that it actually occurs close to the goat’s head in the constellation of Capricorn. The great Babylonian sky watcher assigned the following meanings for these stars.

Dahib 4ş “Successful in business but retires under a cloud, favourable for wealth, influential position but scarcely realises ambitions, trouble through opposite sex, deserved criticism and censure.”

Giedi Prima and Giedi Secunda are two stars in the right horn of Capricornus the goat. These stars glow, yellow, ash and lilac. Capricorn is actually a sea-goat with a fishes tail. He is said to be Pan who fled to Egypt chased by Typhon. He escaped by turning his body into partly a goat and partly a fish. “Hence comes a restless quality in their lives and a mind which is often changed and floats this way and that; the first half of the sign is the slave of Venus, and that with guilt involved, but a more virtuous old age is promised by the conjoined fish below.” [4] Giedi Prima “It gives beneficence, sacrifice and offering.” Giedi Secunda is “ Associated with piety and self-sacrifice.” All the stars in Aquarius decan 1 are found in the head part of the goat. Dahib in the head is a Venus/Saturn, orange and sky blue star that tends to be melancholic.

The tarot card associated with this decan is the 5 of swords. Its Tarot meaning is not that pleasant, and it is seen as being self-serving or as someone who profits from the anguish of others. Karmically we have to look at this card as this decan having suffered abuse from ruthless actions or even of having being the perpetrator of harsh behaviour. Altair’s Eagle in this decan is a predator so it is not surprising there can be a sharp edge to this decan. (Altair is conjunct Mars in the T-square also remember)

“The Five of Swords can sometimes symbolise the overcoming of inner demons and negative mindsets. The battle fought for personal freedom would not have come quickly or easily….This battle may have been a personal challenge for you and one that others believed you could not succeed in.” being born into this decan gives you the tools to fight deftly with intellect. Swords generally symbolise swift and decisive thinking.

Moon conjunct Mars is passionate about protection of the family and those they love. Everything is about strategy, instincts are extra-sensitive and react super-fast to any outside threat. Those touched by this lunar eclipse may find themselves in the middle of emotional domestic explosions. Mothers are easily inflamed so that everyone else in the house is treading on eggshells. At this time we may find it quite hard to mellow out, even when at home and out of the war zone. Moon conjunct Mars can generate conflict just because it makes them feel ‘at home’ if they came from a family where the home was a violent place. (Physically or mentally)

Mars square Uranus makes this lunar eclipse a risk-taker and racer. The collective will feed off adrenaline and have very little patience. Mars/Uranus is about having a great rapport with electrical items and having no qualms about ripping them apart if they have broken down, often risking shock. This aspect is also associated with surgery.

Sharp blades of Mars combine with Uranus’s sudden action so that could stir up a national emergency. Fireworks are symbolic of this aspect too, in the bedroom department as well as in temperament. And yes, quick tempers are easily aroused. Those touched by this lunar eclipse might jump right into a sexual relationship without much forethought during its effect (The next 3 months) Lunar eclipse square Uranus loves to shock and rebel against their mother country. They could do this by rejecting their own culture by marrying someone of another race or moving to a country where they become the ‘alien’.

Moon square Uranus needs constant change and is often nervy and electric. Those touched by this lunar eclipse will feel excited and are constantly on the verge of discovering something novel and unique. The far-out ideas are often misunderstood and sometimes this goes as far as some people being branded with having a mental illness during the effect of this lunar eclipse.

No denying this Lunar Eclipse is one of the most challenging eclipses of the year, but it is also a very brave one. The stakes are high with so many issues that need resolving which must be faced seriously. Any projects must be given enough time for those stubborn kinks to be ironed out. There will have to be some short-term sacrifices for long-term gain too. The temptation is to be far too easily dismissive and Mars square Uranus has very little patience also.

Maybe it is easier to keep searching for that greener grass rather than take on what seems to be a very complex domestic situation with oh so much baggage. However Mars is also retrograde which makes it more transformative and Plutonic in its action, so along with Saturn’s wise healing trine, there is hope that this ambitious promise could actually be delivered. Trust, composure and persistence are needed and inner demons will have to be faced. As with all T-squares, once worked through, the rewards from this lunar eclipse will be well worth the effort.

To help blunt those sharp edges at this lunar eclipse make the gods work for you by immersing yourself in Aquarius decan 1 energy. If your ascendant, Sun or Moon are in the fixed signs decan 1 you might find it hard to curb your impulses. To avoid jumping straight into the deep end without due consideration, try focused meditation or yoga with an Aquarius decan 1 theme.

Useful healing materials and props: The 5 of swords to gaze at, spinach to eat, gladiolus to adorn your table, amber crystal to hold, music in the key of D to listen, Benzoin, Lavender and Pine needles essential oils in a bath.

Amber meaning. It is a peacemaking stone and promotes trust. It is also “A powerful yet gentle healer and cleanser, Amber draws out and transmutes negative energy of all kinds on all levels. Amber aids in physical self-healing, emotional healing of depression, and environmental clearing. Highly protective, Amber also aids in the manifestation of ideas to reality”. ~ healing crystals If you can get hold of the rarer Blue Amber crystal, that form has magical properties and can heal and transmute past hurts and traumas that you have consciously forgotten but continue to affect you subconsciously. Perfect for an eclipse re-boot in Aquarius.

The eclipse won't be visible to viewers in North America, except via webcasts. But observers in much of Africa, the Middle East, southern Asia and the Indian Ocean region will get an eyeful, given cooperative weather, according to lunar scientist Noah Petro, of NASA's Goddard Space Flight Center in Greenbelt, Maryland.