How to Read The Secret Language of Starfleet Uniforms 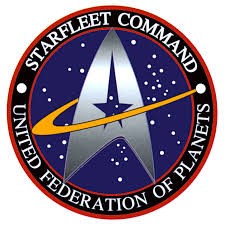 (You can now use for free this Star Trek Beyond Logo  PNG image. It has no background.)

When it's Halloween time again, and as it has been for the past 52 years, a Star Trek costume is a safe bet for anyone looking to dress up according to Atlas Obscura. But do you want to be a Starfleet captain in 2268? A ship’s doctor in 2368? For the uninitiated, deciphering the language of colors and symbols that place you in the show’s universe is a crapshoot.

Luckily, Atlas Obscura is here to help, with a bit of cosplay codebreaking.

This year marks the 50th anniversary of Star Trek, and from the first episode in 1966, the Starfleet uniforms worn by the crew of the U.S.S. Enterprise (and eventually elsewhere) have remained one of the most enduring and iconic aspects of the franchise. Aside from being deliberately utilitarian and futuristic, from the beginning, the uniforms have also been used to communicate a character’s rank and station, although depending on what period in the future you are trying to emulate, the language changes.

Gene Roddenberry imagined the space-faring fleet as something akin to the modern Navy, carrying over much of the same rank and job structure. Each ship has a captain, and subordinate ranks such as commander, lieutenant commander, and ensign. These ranks are spread out among various ship positions like command, security, engineering, science and medical. Within each series, and the movies, most of this can be gleaned just by looking at the character’s uniform.

In the original Star Trek series, which ran from 1966-1969 (or roughly from 2254 to 2269, in universe), there were three standard uniform colors among the Starfleet officers on the Enterprise: gold, blue, and red. During this time period you have gold uniforms being worn by people in command positions (Captain James T. Kirk, helmsman Lieutenant Sulu); blue uniforms were reserved for members of the science divisions, which included the medical staff (O.G. science officer, Lieutenant Commander Spock, and Doctor Leonard “Bones” McCoy). Then you have the hard-working folks in the red uniforms, who make up the operations divisions on the ship, including security and engineering (Chief Engineer Montgomery “Scotty” Scott, and countless, faceless extras that served as doomed security officers, also known as “redshirts”). Interestingly, as explained by a piece over on Mental Floss, the command gold was originally intended to be green, but came out yellowish-gold under the studio lights, and was simply embraced from then on.

Within the various career divisions on the ship, everyone held a different rank as well, which was denoted by a series of rings on the ends of their sleeves. The number of stripes denoting rank shifted a bit throughout the series, but for the most part, a safe reading of the uniforms is that two-three sleeve stripes indicated a captain, a single or double sleeve stripe indicated all other enlisted officers, and a braided stripe (or no stripe) indicated non-commissioned personnel.

This same system of tri-colored uniforms and ranked sleeve cuffs was also adopted in the more recent “Kelvin Universe” Star Trek films of the 2000s to current, with little variation to the meaning. What little difference does exist is in the ranked sleeves, which have been standardized to a trio of rings on a captain’s shirt; two bold rings for a commander; one thin ring, one bold ring for a lieutenant commander; one ring for a lieutenant; and no rings for an ensign.

Within these main Starfleet guidelines, there were variations in style (hello, v-necks and mini-skirts), and even color from time to time, be it for fashion or some mission-specific look, but if we’re looking at classic Trek, you can’t go wrong with those basics.

The Star Trek movies that followed the cancellation of the original series, threw most of the original coloring schemes out the window for a cleaner look, which is surprisingly harder to read. In 1979’s Star Trek: The Motion Picture (which takes place in the mid-2270s), the bright colors were done away with and replaced with white, grey, and beige uniforms.

Here, a person’s position could be determined by the color of the ring behind the Starfleet insignia on their breast. A white ring was used for command, orange and green were used for the science divisions, and red, gold, and grey were used for operations. Rank was now worn on either the sleeve and/or on a shoulder tab. Thankfully, these creamy jumpsuits didn’t last long.

By 1982’s Star Trek II: The Wrath of Khan, Starfleet (and the film’s production department) had adopted an even more standardized and militaristic look. Taking place around the late-2270s, the second film introduced a standard maroon color that was worn by all officers in jumpsuit and jacket styles. While some of the straps and collars were different colors, most of the rank and division information was denoted by complicated badges and insignias generally worn on the left cuff and on a strap on the right shoulder. Variations of these uniforms were worn by Starfleet officers throughout the rest of the original series films.

With the intricate mix of rank indicators and service badges, not to mention the constantly shifting positions of the crew throughout these films, reading the uniforms is a chore, even for die-hard Trek fans. In fact, this uniform style has come to be known as the “Monster Maroon” among fan costumers. Anyone looking for exact accuracy in a costume from this period should reference the always reliable, Memory Alpha wiki on the subject.

Fast forward to the 23rd century and the debut of Star Trek: The Next Generation in 1987, and once again we have a whole new language of uniform. This new series saw the return of the multi-colored officer uniforms, although they often meant different things from when Kirk first donned his velour captain’s shirt.

The rank designations also went back to a simpler system than that of the earlier movies. Beginning in The Next Generation, rank was now shown by a series of circular pips generally worn on the right side of the neckline. This pip system essentially broke down to the more pips someone has, the higher their rank. Captains wore four pips; commanders wore three; lieutenant commanders wore two full pips and one hollow one; lieutenants wore two pips; junior lieutenants wore one full pip, and one hollow pip; and lowly ensigns wore only a single pip.

Higher ranks such as admiral were often shown wearing variations of this system, such as four pips on a black field, or pips beneath a run of stars.

While the cut and style of standard Starfleet uniforms shifted and evolved as the years went on, this system of colors and pips holds true with little variation through the run of The Next Generation, its associated films, and subsequent series Deep Space Nine and Voyager. Commander (later Captain) Benjamin Sisko and Captain Kathryn Janeway sport a command maroon just like Picard did, and characters like Chief Engineer Miles O’Brien wore operations gold in both The Next Generation and Deep Space Nine. As far in the future as canon Star Trek looked (barring certain incidents of time travel), this was the visual language.

The most recent Star Trek television series, 2001’s Enterprise, was actually a prequel, taking place in the mid-2100s, and strangely, their uniforms take cues from every era of the Star Trek franchise. Taking place prior to the formation of the Federation Starfleet seen in later incarnations, the uniforms of the very first space-faring Enterprise, were once again standardized into a purple workman’s jumpsuit (echoing the red-washed uniforms of the later Original Series films). Position on the ship could be determined by the color of a seam that ran along the shoulder of the jumpsuit, with the colors corresponding to the original command gold, science blue-green, and operations red.

And then rank was indicated by the number of silver bars over the right breast, just like the pips used in The Next Generation. While not everyone’s favorite, this suit kind of had it all.

The beauty of Star Trek’s uniform standards is that they allow fans to dream up their own costumes and characters that could conceivably find a place on any Starfleet ship. If you don’t want to dress up like Captain Picard, you can just as easily envision a costume for Lt. Comm. Your-Name-Here. And with the limitless variation of designs within the ranking system, you can always tailor it to your personal style, so long as you are using the established fashion language.

Of course, there is a near unlimited amount of Trek novels, mirror universe tales, cartoons, video games, comic books and more where variations on this uniform symbology may differ. However, if you are looking to become a member of Starfleet this Halloween, you probably can’t go wrong sticking to the lessons seen on screen. Don’t get laughed out of another Star Trek convention.