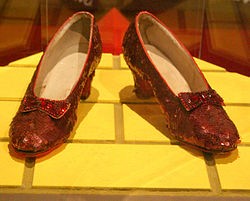 Image: An original pair of ruby slippers used in The Wizard of Oz, on display at the Smithsonian Institution - Wikipedia


The blood red birthstone, the Ruby, is the gemstone of those born in July, under the Cancer sun-sign according to birthstonegems.com. The Ruby was long held in lofty regard in the order of gems by the ancient Hindus. It was christened the ‘King of Gems’, a tribute to its blood red intensity, believed to protect the wearer from evil, signify love and intense passion. Besides the ancient Hindus, tribes in other parts of the world were fascinated by this stone, and its deep red color was synonymous with War and victory. Other attributes of the Ruby are harmony, contentment, integrity, strength, protection from Evil and success.

In ancient times, Rubies were worn by Kings, head of warrior tribes and political rulers.  It was believed to enhance their leadership skills and power of decision-making. The belief has evolved through the ages, and today the stone is believed to aid wearers in making important decisions in life, particularly financial decisions. In the Hindu culture, the Ruby was associated with power, passion and protection. The Ruby was also believed to have curative properties and was used to improve the circulation. The belief is, however, that one must not wear a Ruby anywhere close to the Solar Plexus because the stone has adverse effects on that area. The blood-red stone is said to symbolize strength, vitality, confidence, leadership, and courage. The red Ruby is associated with passion and love.

The ancient Hindus called the July birthstone “Rajnapura” or King of Gems and believed the stone radiated warmth and luminosity from an internal flame. This was linked to the love and passion that emanates from the heart, making this stone the perfect gift for ardent lovers, since its discovery about 2,000 years ago.

The stone has featured prominently in the famous children’s movie, The Wizard of Oz, with the Dorothy’s shoes being made of red Rubies. According to sources, the casting director was fascinated by the stone and wanted it featured in the movie.

Interestingly, the Ruby and Sapphire are from the same gemstone family, Corundum. The only difference is in their color. The Sapphire is Blue, the green Sapphire is Emerald and the red stone is the Ruby.

The July Birthstone, Ruby is considered one of the four precious stones, along with emerald, diamond and Sapphire.

The Ruby comes from part of a family of minerals called Corundum, which also includes Sapphires. The Ruby is only differentiated from the Sapphire by its color. The Ruby has a range of hues, from pink to blood-red, a variety of the mineral, corundum or aluminum oxide. The red color of the stone is due to the element Chromium.

Color - Around the world, the Ruby is a gemstone from the Corundum family that naturally occurs as a red or pink stone or any shade in between. In the United States, however, minimum color saturation must be met to qualify the stone as a Ruby. If it does not meet the color test, the stone is called Pink Sapphire. As a result of the difficulty in making a distinction between Pink Sapphire and a Ruby, trade organizations have adopted a broader definition for the Ruby, which encompasses the pink stones as well.

Origin - The Mogok district in Burma is rich with large, blood red Rubies. The stones are of a purple-red hue, a color that earns the Ruby the name, ‘Pigeon’s Blood’. Myanmar, Thailand, Kenya, India, Pakistan, Sri Lanka, Afghanistan, Cambodia, Tanzania, Australia and the United States are other sources of Rubies.

Healing Power - The Ruby is believed to have many healing properties. The stone is associated with the Sun, and was believed by the ancients to preserve physical and mental health. In the Middle Ages, the stone was thought to have prophetic powers, darkening when danger was imminent. Ivan the Terrible, the Russian despot, believed that the Ruby was good for the heart, brain and memory. Sources reveal a thirteenth century prescription to cure liver problems with powered Ruby. These stones were believed to purge the body of toxins, restore youth and vitality when rubbed on the skin.

Physically, Rubies are believed to energize and bring balance to the body, stimulate the Heart Chakra and spur a passion for life. Emotionally, the stone is believed to motivate the wearer to achieve goals, acquire leadership skills and amass wealth. Some believe the Ruby is the stone of love and passion, and enhances sexual activity.