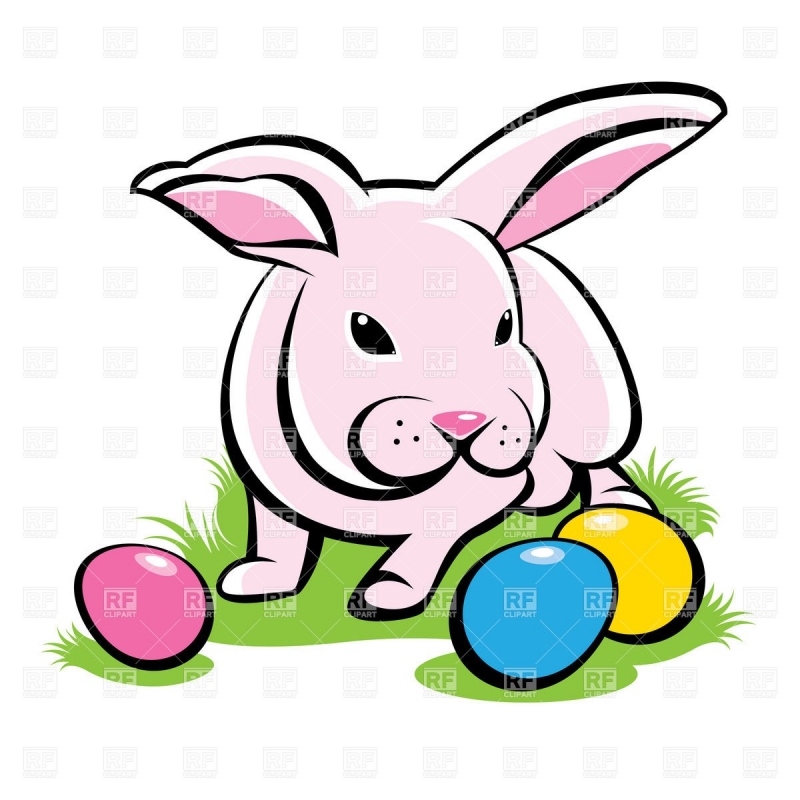 
Here in this article from goddessgift.com we find what Goddess Ostara, History of Easter Eggs, History of the Easter Bunny, Goddess Ishtar and the First Resurrection have to do with East.

The history of Easter reveals rich associations between the Christian faith and the seemingly unrelated practices of the early pagan religions. Easter history and traditions that we practice today evolved from pagan symbols, from the ancient goddess Ishtar to Easter eggs and the Easter bunny.

Easter, perhaps the most important of the Christian holidays, celebrates the Christ's resurrection from the dead following his death on Good Friday. . . a rebirth that is commemorated around the vernal equinox, historically a time of pagan celebration that coincides with the arrival of spring and symbolizes the arrival of light and the awakening of life around us.

Ostara, Goddess of Spring and the Dawn (Oestre / Eastre)

Easter is named for a Saxon goddess who was known by the names of Oestre or Eastre, and in Germany by the name of Ostara. She is a goddess of the dawn and the spring, and her name derives from words for dawn, the shining light arising from the east. Our words for the "female hormone" estrogen derives from her name.

Ostara was, of course, a fertility goddess. Bringing in the end of winter, with the days brighter and growing longer after the vernal equinox, Ostara had a passion for new life. Her presence was felt in the flowering of plants and the birth of babies, both animal and human. The rabbit (well known for its propensity for rapid reproduction) was her sacred animal.

Easter eggs and the Easter Bunny both featured in the spring festivals of Ostara, which were initially held during the feasts of the goddess Ishtar | Inanna. Eggs are an obvious symbol of fertility, and the newborn chicks an adorable representation of new growth. Brightly colored eggs, chicks, and bunnies were all used at festival time to express appreciation for Ostara's gift of abundance.

The history of Easter Eggs as a symbol of new life should come as no surprise. The notion that the Earth itself was hatched from an egg was once widespread and appears in creation stories ranging from Asian to Ireland.

Eggs, in ancient times in Northern Europe, were a potent symbol of fertility and often used in rituals to guarantee a woman's ability to bear children. To this day rural "grannywomen" (lay midwives/healers in the Appalachian mountains) still use eggs to predict, with uncanny accuracy, the sex of an unborn child by watching the rotation of an egg as it is suspended by a string over the abdomen of a pregnant woman.

Dyed eggs are given as gifts in many cultures. Decorated eggs bring with them a wish for the prosperity of the abundance during the coming year.

Folklore suggests that Easter egg hunts arose in Europe during "the Burning Times", when the rise of Christianity led to the shunning (and persecution) of the followers of the "Old Religion". Instead of giving the eggs as gifts the adults made a game of hiding them, gathering the children together and encouraging them to find the eggs.

Some believe that the authorities seeking to find the "heathens" would follow or bribe the children to reveal where they found the eggs so that the property owner could be brought to justice.

The meat that is traditionally associated with Easter is ham. Though some might argue that ham is served at Easter since it is a "Christian" meat, (prohibited for others by the religious laws of Judaism and Islam) the origin probably lies in the early practices of the pagans of Northern Europe.

Having slaughtered and preserved the meat of their agricultural animals during the Blood Moon celebrations the previous autumn so they would have food throughout the winter months, they would celebrate the occasion by using up the last of the remaining cured meats.

In anticipation that the arrival of spring with its emerging plants and wildlife would provide them with fresh food in abundance, it was customary for many pagans to begin fasting at the time of the vernal equinox, clearing the "poisons" (and excess weight) produced by the heavier winter meals that had been stored in their bodies over the winter. Some have suggested that the purpose of this fasting may have been to create a sought-after state of "altered consciousness" in time for the spring festivals. One cannot but wonder if this practice of fasting might have been a forerunner of "giving up" foods during the Lenten season.

Chocolate Easter bunnies and eggs, marshmallow chicks in pastel colors, and candy of all sorts, most of which are given out as personalized gifts during Easter . . . these have pagan origins as well! To understand their association with religion we need to examine the meaning of food as a symbol.

The ancient belief that, by eating something we take on its characteristics formed the basis for the earliest "blessings" before meals (a way to honor the life that had been sacrificed so that we as humans could enjoy life) and, presumably, for the more recent Christian sacrament of communion as well.

Shaping candy Easter eggs and bunnies to celebrate the spring festival was, simply put, a way to celebrate the symbols of the goddess and the season, while laying claim to their strengths (vitality, growth, and fertility) for ourselves.

The Goddess Ostara and the Easter Bunny

Feeling guilty about arriving late one spring, the Goddess Ostara saved the life of a poor bird whose wings had been frozen by the snow. She made him her pet or, as some versions have it, her lover. Filled with compassion for him since he could no longer fly (in some versions, it was because she wished to amuse a group of young children), Ostara turned him into a snow hare and gave him the gift of being able to run with incredible speed so he could protect himself from hunters.

In remembrance of his earlier form as a bird, she also gave him the ability to lay eggs (in all the colors of the rainbow, no less), but only on one day out of each year.

Eventually the hare managed to anger the goddess Ostara, and she cast him into the skies where he would remain as the constellation Lepus (The Hare) forever positioned under the feet of the constellation Orion (the Hunter). He was allowed to return to earth once each year, but only to give away his eggs to the children attending the Ostara festivals that were held each spring. The tradition of the Easter Bunny had begun.

The Hare was sacred in many ancient traditions and was associated with the moon goddesses and the various deities of the hunt. In ancient times eating the Hare was prohibited except at Beltane (Celts) and the festival of Ostara (Anglo-Saxons), when a ritual hare-hunt would take place.

In many cultures rabbits, like eggs, were considered to be potent remedies for fertility problems. The ancient philosopher-physician Pliny the Elder prescribed rabbit meat as a cure for female sterility, and in some cultures the genitals of a hare were carried to avert barrenness.

Medieval Christians considered the hare to bring bad fortune, saying witches changed into rabbits in order to suck the cows dry. It was claimed that a witch could only be killed by a silver crucifix or a bullet when she appeared as a hare.

Given their "mad" leaping and boxing displays during mating season as well as their ability to produce up to 42 offspring each spring, it is understandable that they came to represent lust, sexuality, and excess in general. Medieval Christians considered the hare to be an evil omen, believing that witches changed into rabbits in order to suck the cows dry. It was claimed that a witch could only be killed by a silver crucifix or a bullet when she appeared as a hare.

In later Christian tradition the white Hare, when depicted at the Virgin Mary's feet, represents triumph over lust or the flesh. The rabbit's vigilance and speed came to represent the need to flee from sin and temptation and a reminder of the swift passage of life.

And, finally, there is a sweet Christian legend about a young rabbit who, for three days, waited anxiously for his friend, Jesus, to return to the Garden of Gethsemane, not knowing what had become of him. Early on Easter morning, Jesus returned to His favorite garden and was welcomed the little rabbit. That evening when the disciples came into the garden to pray, still unaware of the resurrection, they found a clump of beautiful larkspurs, each blossom bearing the image of a rabbit in its center as a remembrance of the little creature's hope and faith.

Ishtar, Goddess of Love, and the First Resurrection (also known as Inanna)

Ishtar, goddess of romance, procreation, and war in ancient Babylon, was also worshipped as the Sumerian goddess Inanna. One of the great goddesses, or "mother goddesses", the stories of her descent to the Underworld and the resurrection that follows are contained in the oldest writings that have ever been discovered. . . the Babylonian creation myth Enuma Elish and the story of Gilgamesh. Scholars believed that they were based on the oral mythology of the region and were recorded about 2,100 B.C.E.

The most famous of the myths of Ishtar tell of her descent into the realm of the dead to rescue her young lover, Tammuz, a Vegetation god forced to live half the year in the Underworld. Ishtar approached the gates of the Underworld, which was ruled by her twin sister Eresh-kigel, the goddess of death and infertility. She was refused admission.

Similar to the Greek myths of Demeter and Persephone that came later, during Ishtar's absence the earth grew barren since all acts of procreation ceased while she was away. Ishtar screamed and ranted that she would break down the gates and release all of the dead to overwhelm the world and compete with the living for the remaining food unless she was allowed to enter and plead her case with her twin.

Needless to say, she won admission. But the guard, following standard protocol, refused to let her pass through the first gate unless she removed her crown. At the next gate, she had to remove her earrings, then her necklace at the next, removing her garments and proud finery until she stood humbled and naked after passing through the seventh (and last) gate.

In one version, she was held captive and died but was brought back to life when her servant sprinkled her with the "water of life". In the more widely known version of the myth, Ishtar's request was granted and she regained all of her attire and possessions as she slowly re-emerged through the gates of darkness.

Upon her return, Tammuz and the earth returned to life. Annual celebrations of this "Day of Joy", were held each year around the time of the vernal equinox. These celebrations became the forerunners of the Ostara festivals that welcomed Oestre and the arrival of spring.

A section on the Goddess Inanna (the Sumerian version of the Goddess Ishtar), her myths and symbols, is included with the myths of the goddesses at this website.

Easter eggs, the Easter Bunny, the dawn that arrives with resurrection of life, and the celebration of spring all serve to remind us of the cycle of rebirth and the need for renewal in our lives. In the history of Easter, Christian and pagan traditions are gracefully interwoven.