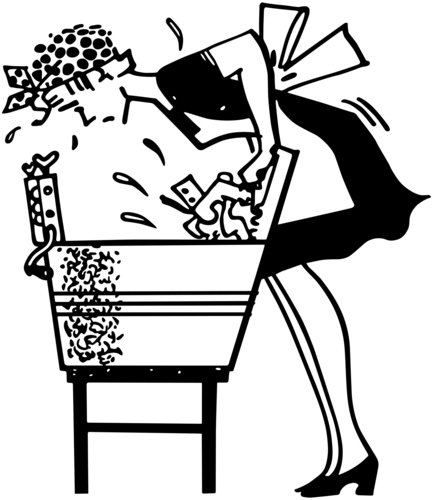 On this date in 1797, Nathaniel Briggs patented a "washing machine."  The earliest special-purpose mechanical washing device was the washboard, invented by him in New Hampshire.

Eventually, clothes washer technology developed as a way to reduce the manual labor spent, providing an open basin or sealed container with paddles or fingers to automatically agitate the clothing. The earliest machines were hand-operated and constructed from wood, while later machines made of metal permitted a fire to burn below the washtub, keeping the water warm throughout the day's washing.

By the mid-1850s steam-driven commercial laundry machinery were on sale in the UK and US. Technological advances in machinery for commercial and institutional washers proceeded faster than domestic washer design for several decades, especially in the UK. In the United States there was more emphasis on developing machines for washing at home, though machines for commercial laundry services were widely used in the late 19th and early 20th centuries. The rotary washing machine was patented by Hamilton Smith in 1858. As electricity was not commonly available until at least 1930, some early washing machines were operated by a low-speed, single-cylinder hit-and-miss gasoline engine.