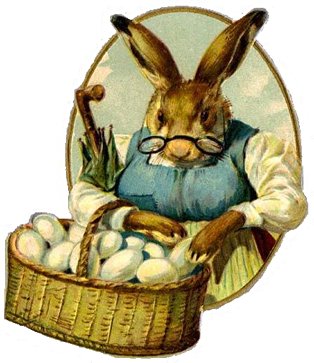 Multicolored eggs. Cute bunny rabbits. Learn the history behind some of this Christian holiday's most popular traditions.  In this collection of information we explore six myths and legends about Easter traditions.

The Easter bunny is often considered a part of Easter because of the notable ability of bunnies to proliferate. However, there are roots back to the actual name of Easter. A goddess of fertility, Eostre, (who may have been one of the inspirations for the name Easter) is said to have been accompanied by a hare. Although many sources debate this connection. The tradition of the bunny was brought to the U.S. by German settlers to Pennsylvania.

Some traditions connect this name with Ishtar, the Babylonian and Assyrian goddess of love and fertility, or Eostre, an Anglo-Saxon goddess of spring. Doubtless, the Christian holiday was modeled after pagan celebrations of spring and fertility. However, its traditions also closely mimic Passover, and the last supper is believed by some to be a Passover Seder. European names still use this root for what they call Easter; in Spanish it is Pasqua, French call it Paques, and the Italian name is Pasqua.

Hot cross buns and other breads marked with an X to symbolize the cross are a tradition on many Easter tables. Different sweet breads are also used all over the world. Try these: Choreg (Armenia), Paska (Ukraine), Babka (Poland), Tsoureki (Greece). Also try a traditional Italian Easter Bread (shown above) with eggs baked right in. These bread are conspicuously risen breads which may also show a desire for Easter traditions to be different from Passover which includes unleavened breads.

The tradition of eating ham most likely came from the slaughter of an animal before fall and then preserved in salt over the winter, sometimes buried near the sea. 67 percent of Americans serve ham at their Easter dinners, according to pork.com, and this typically breaks any meat fast that is undertaken during Lent.
Source: foodtimeline.org

The star of Easter—painted, dyed, gilded in silver and gold, blown empty and hung on trees—is the egg. Legends abound about this symbol of life. Around the world they are brought to church, given as gifts, hidden for the benefit of children and even rolled on the White House lawn.

Easter is a moveable feast, meaning it changes depending on a few things. The council of Nicea in 325 determined that it would occur after the full moon following the vernal equinox on the next occurring Sunday, unless this happened to interfere with Passover, in which case it should be the Sunday after that. Got it? It can occur anytime between March 22 and April 25.