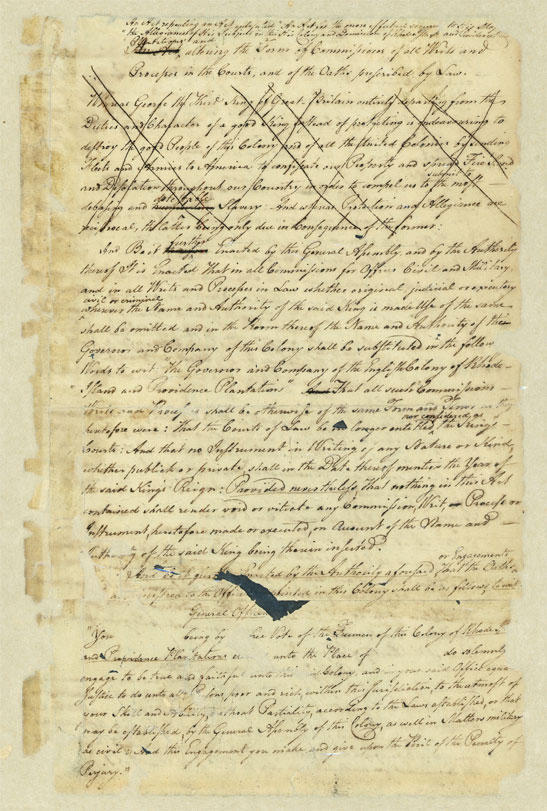 So you think you know your American history, right?  You know that on July 4, 1776, in Philadelphia, Pennsylvania, we, the American colonists declare independence from the mother country, England.  This gathering of noble countrymen worked long and hard to decide to cut the cord and become a free nation.

However, just a few short months BEFORE, on May 4th, according to articles on npr.com and history.com, Rhode Island had taken matters one step sooner and severed connections with England all on its own.

The anniversary of Rhode Island's declaration of independence from the British Empire in 1776.

Rhode Island repealed legislation pledging its allegiance to the crown -- two months before any of the 12 other colonies.

Rhode Island, the colony founded by the most radical religious dissenters from the Puritans of Massachusetts Bay Colony, becomes the first North American colony to renounce its allegiance to King George III. Ironically, Rhode Island would be the last state to ratify the new American Constitution more than 14 years later on May 29, 1790.

Rhode Island is not always the first place people think of when looking back on the American Revolution. But before Boston fought unfair taxation tossing tea into the ocean in 1773, there was the Gaspee Affair in 1772.

Rhode Island served as a mercantile center of the transatlantic slave trade in the 18th century. West Indian molasses became rum in Rhode Island distilleries, which was then traded on the West African coast for slaves. After taking their human cargo across the notorious middle passage from Africa across the Atlantic to the Caribbean islands, Rhode Island merchants would then sell those who survived the boats’ wretched conditions and rough ocean crossing to West Indian plantation owners for use as slaves in exchange for a fresh shipment of molasses.

After threats of tighter customs enforcement in the ports of Newport and Providence, Rhode Islanders took to burning down a British ship, the HMS Gaspee, in Warwick.

Rhode Island’s economy relied heavily on the trade of sugar, molasses, and slaves. It also benefitted from trade with smugglers.

Desire to protect this lucrative triangle trade led Rhode Islanders to bristle at British attempts to tighten their control over their colonies’ commerce, beginning with the Sugar Act of 1764, which tightened trade regulations and raised the duty on molasses. Two major incidents involving Rhode Islanders took place during the ensuing colonial protests of British regulation in the late 1760s and early 1770s. On June 10, 1768, British customs officials confiscated John Hancock’s sloop Liberty because it had previously been used to smuggle Madeira wine, inciting a riot in the streets of Boston. Four years later, near Providence, the British customs boat Gaspee ran aground, and Rhode Islanders, angered by continued British attempts to tax them in ways they perceived as unfair, boarded and burned it, wounding the ship’s captain.
The crown’s efforts to raise taxes on these sales sparked calls for independence, leading to May 4, 1776.
Concerns over high taxes to a central government also explain why Rhode Island was the last state to ratify the Constitution.
Rhode Island mercantile strength caused almost as much trouble for the new American nation as it had the old British empire. Because it had independent wealth and trade coming through the two vibrant ports of Providence and Newport, Rhode Island was the only small state that could theoretically survive independent of the proposed federal union in 1787. The state had no desire to lose income in the form of import duties to the new federal government. As a result, Rhode Island was the last state to ratify the Constitution in 1790, when it was finally confronted with the prospect of the greater financial impositions it would suffer being treated as a foreign country from the United States.