Which Flowers Bloom in March? 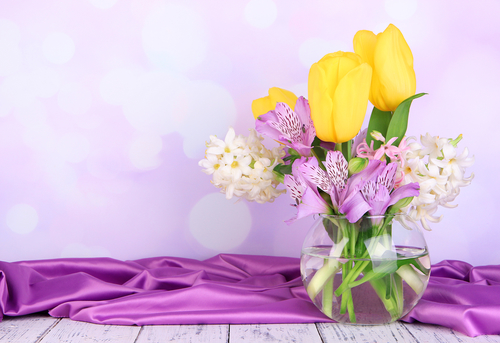 In this article from sfgate.com we get a look at which flowers bloom in March. Though colorful blossoms usually liven up gardens in late spring and summer, some flowers open earlier, in March. This first burst of color is an exciting sign that spring has finally arrived. Some flowers pop out as soon as the last winter frost passes, while others paint their shrubs as the first spring rains hit the soil. If you don't want to wait until summer to see new life in your garden, you'll find plenty of March bloomers that are easy to grow and full of personality.

Trumpet Honeysuckle
Trumpet honeysuckle (Lonicera sempervirens) is a flowering vine that blossoms from March through June. Hardy to USDA zones 5 through 10, this perennial's long, bell-shaped flowers are a rich peachy color. Giving off a sweet fragrance, they attract butterflies and hummingbirds that help pollinate them.

Hardy to USDA zones 5 through 9, winter hazel (Corylopsis spicata) adds a sunny burst of color to gardens in March with its bell-shaped yellow blossoms. They grow in large groups before foliage reappears, creating a creamy curtain of flowers hanging from a maze of bare tree branches. They appreciate acidic to neutral soil, sheltered from winds. An added benefit of growing winter hazel is the flowers' rich fragrance.

Baby blue-eyes (Nemophila menziesii) are annual wildflowers that grow naturally in meadows and grassy areas. They're hardy to USDA zones 3 through 9. Their pale blue flowers have five petals and span 1-inch in diameter, but their stems can grow a foot tall. Once they open in March, they can stay open until June.

Sometimes called blue dick, wild hyacinth (Dichelostemma capitatum) grows in woodland and grassland areas. In early spring, its pale purple, bell-shaped flowers blossom on thin 2- or 3-foot stems. If you're growing wild hyacinth in your garden, you don't have to water it most of the year; the only time it needs a drink is when it grows in springtime, including the month of March. It's hardy to USDA zones 10 and 11.

In Spanish, Chuparosa (Justicia californica) means "hummingbird" -- a fitting name for a flower that's a favorite with the hummingbird crowd. This branchy shrub is hardy to USDA zones 8 and 9, specifically in arid areas. Also called hummingbird bush, it has a grayish-green coloring most of the time with few leaves. But between February and June, it bursts with red flowers, which hummingbirds pollinate.

It may look like a summer flower, but sunflowers pop out in early spring. If you're looking for a flower that adds an instant sunshine feel to a garden, the common sunflower (Helianthus annuus) -- hardy to all zones as an annual -- is a fun choice. Sometimes growing to a towering height of 7 feet, its bright yellow flower spans 2 to 5 inches in diameter, blooming from March to October. Their faces follow the sun as it floats from one side of the sky to the other each day.