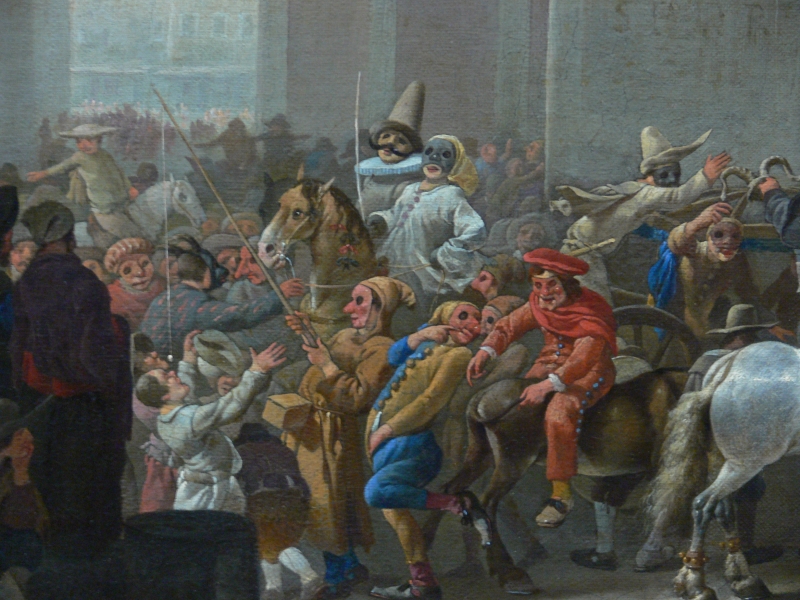 I'm sure you've heard of the Mardi Gras in New Orleans. It's been celebrated for centuries and is known world-wide. However, many people still do not understand what Fasching is in Germany according to deutscheshaus.cc..

Fasching is Germany's carnival season. It starts on the 11th day of November at exactly 11minutes after 11am and ends at the stroke of midnight on Shroud Tuesday - often referred to as Fat Tuesday (the Tuesday before Ash Wednesday). Fasching is more or less a Roman Catholic and Christian Orthodox celebration and most Protestant and non-Christian areas do not celebrate it.

Fasching (also known as Karneval) is a time of festivity and merry making - a time to break the rules, poke fun at those who make them and then to make your own new rules.
In Germany, particularly in the Rhineland area, the tradition can be traced to medieval times where many countries existed under harsh rules. Kings, princes and even smaller potentates maintained their own courts. In doing so, they flaunted before each other their own pomp and splendor at the expense of their population.
During Karneval time, the common people took a chance at 'living it up" and "talking back to their rulers". They would make a mock government of eleven people, as well as other officials. A prince and princess were selected to rule the country during the Fasching season. Political authorities, high placed persons and sovereigns were the target of ridicule, and featured in humorous and satirical speeches. To avoid persecution and punishment, these antics were played out from behind masks and costumes. Parades, dancing in the streets, masquerade balls and comical skits filled the days and nights.
Karneval festivities have become annual events around the world.

Also known as Fasching, Carnival and Mardi Gras, the most famous are located in the following places:

Köln (Cologne), Germany
Nice, France
Trinidad
Rio de Janeiro,
Brazil
New Orleans, Louisiana
Although Carnival in Rio is probably the craziest of all, Germany is undoubtedly the most enthusiastic Karneval center in Europe.
Nearly every town has its own festivities and it is celebrated in homes across the country with the same enthusiasm in which we celebrate Halloween. The Karnevals vary from area to area, but no matter where the celebrations are held, there is fun, happiness, laughter and a certain nostalgia.
Karneval, Fasching, Fastnacht, etc
What is it?

Carnival season is a time of wild fancy-dress parties and costume balls, which are open to the public. Carnival reaches its climax in big street processions with elaborately decorated floats, usually on Rosenmontag. Carnival celebrations happen mainly in the Catholic parts of Germany. Nevertheless, Karneval parties do occur in some places in the north of Germany.

Officially it starts am elften elften um elf Uhr elf (11th November at 11:11am) and continues in a fairly low-key way for about three months before the Tolle Tage (Crazy Days) which climax on Rosenmontag, the 42nd day before Easter.

Carnival season is traditionally seen as a chance for people to go wild and let their hair down before Lent starts on Ash Wednesday. In the Christian church Lent is a serious time before Easter for fasting (eating no food or very little food) and making up for your sins and mistakes.

Why the different names for it? Carnival is a regional festival and is celebrated in different ways according to different local traditions. It’s known as:

Karneval in the "Rheinland" (Rhineland) area;
Fastnacht around the city of Mainz ('fasting night', or eve of Lent, the period of fasting);
Fasnet in Swabia (south-west region of Germany) and in the southwest of the state of Bavaria;
Fosnat in the Franken region (northern Bavaria), and as
Fasching around the city of "München" (Munich) and in Austria.
What do people do?

Carnivals are held in southern German cities, and in the Rheinland (Rhineland) cities of Mainz, Aachen, Bonn and Düsseldorf. The biggest and zaniest Karneval is in Köln (Cologne). The first written record of the Köln carnival is from the year 1341. Köln has the Dreigestirn (three Stars): the Carnival Prince (known as Seine Tollität, ‘His Craziness’), the Bauer (peasant) and the Jungfrau (damsel). The Jungfrau has always been a man. It is a great honour to be a member of the Dreigestirn, and they are elected each October from the members of Köln’s 105 historic carnival associations.

The Köln carnival involves heaps of street-parties and pub-parties, with people disguising themselves in all sorts of ways. In fact, on Rosenmontag you stand out as unusual if you aren’t wearing some sort of mad costume or haven’t painted a clown-face on yourself. At the parades and costume-balls people are dressed as sheiks, Vikings (with hairy coats and horned helmets), Attila the Hun, clowns and harlequins, devils, witches, animals, or fruit, and in many other creative ways (see the picture collections). Köln’s many Karneval associations put a lot of effort into building and decorating the floats for the Rosenmontag parade.

As the floats pass by, the costumed people on board them pelt the street crowds with lollies and sweets while they sing the many old Karneval songs. The Mariechen, acrobatic dancing troupes of girls entertain the crowds as part of the parade. In the parade the Carnival Prince has a royal bodyguard who are dressed in uniforms of the early 1800s. The bodyguards remind the crowd of the city’s tradition of antimilitarism by disobeying orders (eg turning in the wrong direction) and by sticking flowers in their rifle-barrels. About 1.5 million people go to the Rosenmontag parade in Köln.
Weiberfastnacht (women’s carnival night) is the Thursday before Rosenmontag, and it is tradition that women are allowed to cut off the tie of any man within reach, and to kiss any man they want to. Women going out that night to pubs take scissors with them. Rosenmontag is not an official holiday but in areas of Germany that celebrate Karneval, workers usually get the day off. On Rosenmontag German television devotes a lot of time to Karneval am Rhein.
History
As described above, Karneval is associated with festivals of the Christian church (wild partying before Lent begins). However, it goes back to pagan times, and was a way of driving out the evil spirits of winter and encouraging the coming of spring and good crops. Ugly masks worn for this purpose are still worn in carnival festivals in southern Germany. Karneval can be traced back to pagan Roman festivals, which may explain why Köln and Mainz, two ancient cities with Roman history, have such big carnivals. In the Middle Ages, Karneval gave the people a break from the tightly structured class system, as they were able to hide their social background behind imaginative masks and costumes. Poor people were able to mix with all other levels of society and share fun with them. In those days people would dress up as knights, damsels and even priests, as a way of making fun of them. In a similar way, people these days sometimes wear masks which make fun of well-known politicians or celebrities.