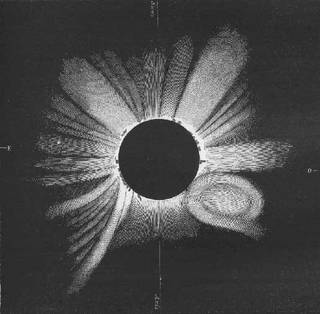 The total solar eclipse of 1860 (shown here in a sketch from the time period) gave scientists their first recorded glimpse of a coronal mass ejection, a cloud of solar material expelled from the sun at millions of miles per hour. These events are only visible during eclipses — or by using a coronagraph, an instrument that creates an artificial eclipse — because the sun’s bright face drowns out the comparatively faint corona. NASA - Credits: G. Tempel (public domain)


In this thorough article from Astrology King, we get a good look at today’s Solar eclipse and what it will bring us as it is aspected by planets, asteroids and major constellations.

The Solar eclipse on Tuesday 8 March 2016 at 18° Pisces 55? and falls in Pisces decan 2. The Solar eclipse astrology focuses on the healing of a deep wound in your soul, represented by Chiron alongside the Solar eclipse. It may be an old or new wound affecting your body, mind or spirit. Growing pains due to challenging aspect from Jupiter and Saturn are relieved by the recuperative and evolving power of Pluto. Freedom from pain allows for a spiritual transformation, the evolution of your soul. This Solar eclipse will remain active until the next Solar eclipse in September 2016. As the eclipse cycle progresses, planetary aspects to the eclipse degree will mark more active times when events relating to the eclipse will likely unfold. The strongest of these being Mercury on the eclipse degree on March 15 and Venus on March 27.

A Solar eclipse in the Constellation of Aquarius suggests events connected to aviation, flooding of rivers and its impact on agriculture. Revolution and war will continue but with a greater focus on new directions and humanitarian organizations. Another small star in this area of the sky between Constellations Aquarius and Pisces is ? Pegasi on the hoof of the Flying Horse.

I have written about the Astrological Ages and suggested we are in the Age of Pegasus. An era of climate change and rising oceans, carrying us from the Age of Pisces to the watery Age of Aquarius.

A Solar eclipse conjunct Chiron gives the strongest indication of what your new goals or new focus for the next six months is about. To the Greeks, Chiron was the wise Centaur who brought astrology to humanity. To Christians he is Jesus Christ who counted the number of the stars and called names to all of them. Both were healers of wounded souls who used natural methods like hands-on healing, herbs and the power of the mind.

Think of all the healing techniques you can that start with the word chiro, the Greek word for hands. Even palm reading is termed chiromancy. Chiron was not part of the establishment and he mingled with other outcasts. He was seen as a maverick who used unorthodox methods to heal others and promote spiritual enlightenment.

The major theme of the Solar eclipse March 2016 therefore relates to a deep wound in your soul. This could be some existing physical or emotional pain, but may also indicate a new wound received following this eclipse. Other aspects in the Solar eclipse of March 2016 astrology chart and the lunar eclipse in two week’s time will give more detail about the nature of your wound and the healing process.

Both Chiron and Constellation Aquarius have the New Age feel about them. The wounding/healing may manifest physically or emotionally but will involve a spiritual component, especially during healing. Your new start or new goals may involve natural or alternative methods but also new breakthroughs in science and technology. Air travel and the Internet have a part to play in both wounding through the spread of disease, and healing through information sharing.

Your wounding and healing journey could be in response to dramatic changes in global weather which are affecting our bodies and souls in ways we cannot even image. The story of Chiron will be further understood in relation to the transition of healing from medicine, to hands, to the mind and ultimately to purely spiritual healing.

A Solar eclipse opposite Jupiter means there are forces acting against your growth, prosperity and happiness. The influence of Chiron suggests health issues impeding your growth and happiness. An old wound that has been pushed inside would now manifest as unhappiness, selfishness, exaggerated pride or gluttony with food or drugs.

Unethical or immoral behavior will not be rewarded. Moderation, self-control and self-discipline will help you avoid the over optimistic and excessive nature of Jupiter. Try not to take on too much or push yourself too hard because of a tendency to over-estimate your resources and abilities.

The Solar eclipse square Saturn frustrates and delays the achievement of your Solar eclipse goals through setbacks, separations or loss. Fear and pessimism can lead to a defeatist attitude and melancholy. There will be a tendency to evade responsibility and give up on your goals. Saturn may indicate that your wound stems from guilt and resulting self-abuse. This would indicate the karmic repercussions of inflicting a wound on another person.

Any Jupiter unethical or immoral behavior will now be punished. If your own wound stems from guilt about hurting someone else or being disloyal, then forgiveness is critical to healing your wound. Forgive yourself but also importantly forgive anyone who has hurt you. Forgive even the person who you have harmed because they must have done something to deserve it. This aspect requires hard work, patience and discipline.

Jupiter square Saturn can limit your growth and represents the struggle to heal. Conflicting urges to move ahead or stay safe and secures leads to inner tension and stress. Disappointment and delays make it that much harder to focus on the original Solar eclipse goals of healing your wounds. It tips the balance of Chiron’s wounding/healing theme to the wounding side.

This Solar eclipse sextile Pluto comes to the rescue as it increases your need to succeed. You will feel more determined and purposeful than usual to achieve your goals. Any obsessive or compulsive tendencies you have can actually be harnessed to get a difficult task done. This aspect also gives tremendous healing and recuperative powers which can be used to overcome the negative influence of Jupiter and Saturn.

This aspect also describes the result of your healing process, which is the evolution of your soul. The reduction of pain allows you to soar higher at the spiritual level. A rapid leap in spiritual development can actually cause physical pain as your higher self jumps ahead but leaves your physical body behind. The resulting growing pains will then need to be healed through those methods associated with Chiron.

Jupiter trine Pluto means large-scale growth and transformation due to a staggering increase in power and influence. This is one aspect that can really combat the limiting and depressing influence of Saturn. It compensates for any defeatism or lack of faith, and ensures higher moral and ethical standards. Powerful forces keep you striving ahead and the wounding/healing balance of Chiron tips back to the healing side.

Uranus square Pluto is behind the Solar eclipse, the radical, wide-ranging change over the last five years. The routine and structures in your life may have changed abruptly, requiring flexibility and a broad view to help you adapt. Old structures and routines became outdated, as children arrived, or grown up children left home. Your parents may have needed more care, or have passed away. Whatever the circumstances, they have forced you to evolve, and evolve rapidly.

Saturn trine Uranus is ahead of the Solar eclipse, another transition phase in your life over the next year. This is the ideal time to make positive changes in your life because they should run smoothly. Change will not be upsetting or erratic as it sometimes can be. You will remain calm and patient, planning every step methodically. You may be given more responsibility but also be allowed enough freedom to tackle the work in your own way.

The March 8 Solar eclipse shows you and your goals for the next six months. Chiron shows a wound in your mind, body or soul; an illness, disease or injury at the physical, psychological or spiritual level. It could be an existing wound from this life or a previous one, or it may come during the eclipse phase. With wounding comes healing, in some cultures there is only one word to describe both.

Jupiter shows how you need to take it easy. Don’t overdo things or take on too much, give yourself the time to heal. Saturn shows the struggle, pain and fear involved. Be patient, self-disciplined and take responsibility. Forgive yourself and others.

Pluto shows your powerful will to succeed and gives recuperative and healing powers. Growing pains come through the healing process or as your spirit leaps ahead of your body. The healing of your wound leads to a spiritual transformation and the evolution of your soul.

Chiron’s golden rule has been broken but it is easy to fix. Treat others like you want to be treated, with respect!