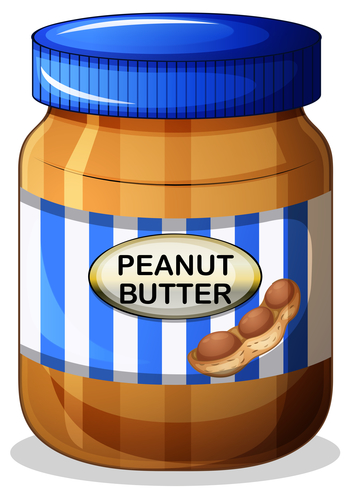 Peanut butter is a daily staple in many homes.  We all grew up with the ubiquitous spread loving it on toast, apple slices or with celery.  Unfortunately a small group will never know the awesome, stick to the roof of your mouth moment because they are highly allergic to all peanut products.  In this well researched article from about.com, we learn the history behind this awesome goober.
Peanut butter was invented and reinvented many times during history. Peanuts were known as early as 950 B.C. and originated in South America. The ancient Incas used peanuts and were known to have made it into a paste-like substance. As a crop peanuts emigrated from South America to Africa by early explorers and then traveled by trade into Spain who then traded the product to the American colonies. The first commercial peanut crop was grown in Virginia in the early to mid 1840's and in North Carolina beginning around 1818.

According to the Corn Products Company, Dr. Ambrose Straub of St. Louis patented a peanut butter-making machine in 1903 and some unknown doctor invented peanut butter in 1890.

By 1914, many companies were making peanut butter.

Agricultural chemist, George Washington Carver discovered three hundred uses for peanuts and hundreds more uses for soybeans, pecans and sweet potatoes. He started popularizing uses for peanut products including peanut butter, paper, ink, and oils beginning in 1880. The most famous of Carver's research took place after he arrived in Tuskeegee in 1896. However, Carver did not patent peanut butter as he believed food products were all gifts from God. The 1880 date precedes all the above inventors except of course for the Incas, who were first. It was Carver who made peanuts a significant crop in the American South in the early 1900's.

After all peanut butter is just roasted peanuts crushed into a paste. One-half of all edible peanuts produced in the United States are used to make peanut butter and peanut spreads.

It is rare to find a man of the caliber of George Washington Carver. A man who would decline an invitation to work for a salary of more than $100,000 a year (almost a million dollars today) to continue his research on behalf of his countrymen.

However, Carver only applied for three patents.

#1,522,176, 1/6/1925, Cosmetics & Plant Products
#1,541,478, 6/9/1925, Paints & Stains
#1,632,365, 6/14/1927, Paints & Stains
Early Life
George Washington Carver was born in 1864 near Diamond Grove, Missouri on the farm of Moses Carver. He was born into difficult and changing times near the end of the Civil War. The infant George and his mother kidnapped by Confederate night-raiders and possibly sent away to Arkansas. Moses Carver found and reclaimed George after the war but his mother had disappeared forever. The identity of Carver's father remains unknown, although he believed his father was a slave from a neighboring farm. Moses and Susan Carver reared George and his brother as their own children. It was on the Moses' farm where George first fell in love with nature, where he earned the nickname 'The Plant Doctor' and collected in earnest all manner of rocks and plants.

He began his formal education at the age of twelve, which required him to leave the home of his adopted parents. Schools segregated by race at that time with no school available for black students near Carver's home.

He moved to Newton County in southwest Missouri, where he worked as a farm hand and studied in a one-room schoolhouse. He went on to attend Minneapolis High School in Kansas. College entrance was a struggle, again because of racial barriers. At the age of thirty, Carver gained acceptance to Simpson College in Indianola, Iowa, where he was the first black student. Carver had to study piano and art and the college did not offer science classes. Intent on a science career, he later transferred to Iowa Agricultural College (now Iowa State University) in 1891, where he gained a Bachelor of Science degree in 1894 and a Master of Science degree in bacterial botany and agriculture in 1897. Carver became a member of the faculty of the Iowa State College of Agriculture and Mechanics (the first black faculty member for Iowa College), teaching classes about soil conservation and chemurgy.

In 1897, Booker T. Washington, founder of the Tuskegee Normal and Industrial Institute for Negroes, convinced Carver to come south and serve as the school's Director of Agriculture. Carver remained on the faculty until his death in 1943.

Read the pamphlet - Help For Hard Times - written by Carver and forwarded by Booker T. Washington as an example of the educational material provided to farmers by Carver.

At Tuskegee Carver developed his crop rotation method, which revolutionized southern agriculture. He educated the farmers to alternate the soil-depleting cotton crops with soil-enriching crops such as; peanuts, peas, soybeans, sweet potato, and pecans.

America's economy was heavily dependent upon agriculture during this era making Carver's achievements very significant. Decades of growing only cotton and tobacco had depleted the soils of the southern area of the United States of America. The economy of the farming south had been devastated by years of civil war and the fact that the cotton and tobacco plantations could no longer (ab)use slave labor. Carver convinced the southern farmers to follow his suggestions and helped the region to recover.

Carver also worked at developing industrial applications from agricultural crops. During World War I, he found a way to replace the textile dyes formerly imported from Europe. He produced dyes of 500 different shades of dye and he was responsible for the invention in 1927 of a process for producing paints and stains from soybeans. For that he received three separate patents.

God Gave Them To Me

Carver did not patent or profit from most of his products. He freely gave his discoveries to mankind. Most important was the fact that he changed the South from being a one-crop land of cotton, to being multi-crop farmlands, with farmers having hundreds of profitable uses for their new crops. "God gave them to me" he would say about his ideas, "How can I sell them to someone else?" In 1940, Carver donated his life savings to the establishment of the Carver Research Foundation at Tuskegee, for continuing research in agriculture.

George Washington Carver was bestowed an honorary doctorate from Simpson College in 1928. He was an honorary member of the Royal Society of Arts in London, England. In 1923, he received the Spingarn Medal given every year by the National Association for the Advancement of Colored People. In 1939, he received the Roosevelt medal for restoring southern agriculture. On July 14, 1943, U.S. President Franklin Delano Roosevelt honored Carver with a national monument dedicated to his accomplishments. The area of Carver's childhood near Diamond Grove, Missouri preserved as a park, this park was the first designated national monument to an African American in the United States.

"He could have added fortune to fame, but caring for neither, he found happiness and honor in being helpful to the world." - Epitaph on the grave of George Washington Carver.