This Is the Rarest Zodiac Sign in the World 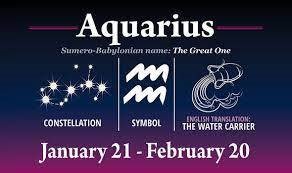 We tend to cross paths with some zodiac signs more than others according to lifestyles.aol.com. This can often be due to the compatibility of the zodiac signs or which zodiac elements blend well together. As a Taurus, you might have more Virgo or Scorpio friends. And as a Pisces, you might see more Cancers in your friend group.

That said, zodiac trends also have to do with how many people are born under each zodiac sign, since some zodiac signs are more common than others, based on common birthdates. Just like there are the most common zodiac signs, there are also zodiac signs that are rare—and one sun sign, in particular, happens to be the rarest zodiac sign.

The 12 signs of the zodiac all come with a set of unique personality traits and are special in their own ways (they each even have a corresponding tarot card and connection to your health). But nothing is as special as being the rarest. What is the rarest zodiac sign, you ask?

It is none other than Aquarius, which includes people born between January 20 and February 18. “There are the least amount of births in January and February, making Aquarius the rarest zodiac sign,” says Lisa Stardust, a New York City–based astrologer and author of Saturn Return Survival Guide: Navigating This Cosmic Rite of Passage.

As the rarest zodiac sign, those with Aquarius sun signs are “known to be the unique thinkers of the zodiac,” says Stardust. They are also considered “the innovators and originators of fresh perspectives.”

In addition to being the rarest zodiac sign, what sets this sign apart from the other 11 signs of the zodiac is that “they are known to be the watery part of air,” says Stardust. This makes them “logical as well as intuitive.” And they also “have the ability to see where humanity is headed and make moves toward progressing it,” says Stardust. (Perhaps they also know the best way for each zodiac sign to relieve stress?)

What signs are compatible with Aquarius?

When it comes to Aquarius compatibility, Stardust says these signs tend to attract and be attracted to other air signs. “Gemini and Libra tend to be the most compatible with Aquarius, due to the fact that they are able to process their sentiments through communication and thought,” Stardust explains.

Just like there is the rarest zodiac sign, there is also a zodiac sign that is most common. Stardust says “Virgos, who were conceived on New Year’s during celebration and fun,” are the most common signs of the zodiac. Those who were born between August 23 and September 22 are considered Virgos and are “known to be hard-working, patient, analytical, kind, and diligent,” says Stardust.

According to Stardust, the second rarest zodiac sign is Aries, and after that, it’s Sagittarius, both of which are fire signs. “Aries is the first sign of the zodiac,” says Stardust, noting how this sign tends to have a spark of inspiration that “gets everyone going and moving.” Sagittarius, the third rarest sign of the zodiac, “falls during the autumn season and [they] are known to be adventurous and free-spirited,” says Stardust.

Most of us stick with the 12 astrological signs of the zodiac—and have since the Babylonians first cultivated the signs of the zodiac over 3,000 years ago. These signs are Aries, Taurus, Gemini, Cancer, Leo, Virgo, Libra, Scorpio, Sagittarius, Capricorn, Aquarius, and Pisces and are based on 12 constellations in the night sky. But when NASA made some tweaks to the constellation map in 2016, they added a 13th constellation called Ophiuchus and thus prompted the question: Is there a 13th zodiac sign?

No, NASA did not invent a new zodiac sign. In fact, the Babylonians were aware of this constellation and simply chose not to include it in their group of zodiac signs. NASA explained the reason for not adding a 13th sign of the zodiac: Astrology and astronomy are not the same thing, and just because an additional constellation is added to the map doesn’t mean it is added to the zodiac, too.

That said, some still choose to recognize Ophiuchus as the 13th zodiac sign and, because it is rarely used in the world of astrology, it is also believed to be the second rarest zodiac sign. Those who are born between November 29 and December 17 would be considered Ophiuchus (though, according to the traditional 12 signs of the zodiac, those born between November 22 and December 21 are Sagittarius). These Ophiuchus individuals are “known to be the charmers of the zodiac,” says Stardust, adding that they are “very insightful and knowledgeable, as well as magnetic and captivating.”