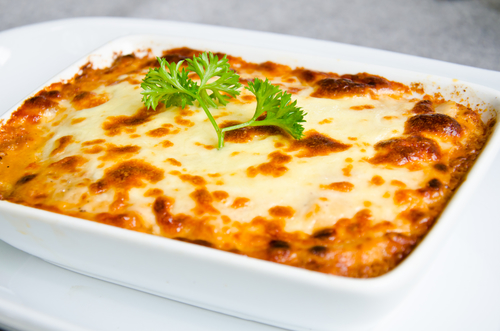 According to Yahoo Food, with the Super Bowl being the most watched sporting event of the year in the U.S., Super Bowl parties have practically become a patriotic duty. Spectators gather not only to follow the game but to live-tweet crazy commercials and sing along with the halftime show (or hope for some sort of wardrobe malfunction to gossip about).

Amid all that wild revelry, one can definitely work up an appetite.  Here is a recipe that is sure to please the crowd and have many asking the cook, "Who are you??"

Making the lasagna crust is actually the hardest part of this recipe. But believe it or not, you can get this thing in the oven in less than 45 minutes—and that includes the time it takes to make all three sauces from scratch. The amounts given below are guidelines based on a 10-inch diameter bowl, though you may have leftovers if yours is smaller. Be sure to keep your layers thin, so that the final product holds its shape and doesn't get too soggy. If you want more sauce, just serve it alongside the finished product.

Grease the interior of a heavy, oven-safe glass or ceramic bowl lightly with melted butter.

Build your crust: Layer noodles around the insides of the bowl, overlapping by 1/2 inch, with their ends meeting at the bowl’s bottom. Allow the noodles to drape an extra 3 inches over the rim of the bowl.

Repeat the above process using noodles and substituting pesto for the Alfredo sauce, and using 1/8 cup instead of 1/4 cup in each layer.

Repeat again with tomato sauce and noodles, using a 1/3 cup of sauce in each layer. Make sure that the final layer leaves at least 1/2” distance from top rim of bowl.

Top with one final layer of noodles. Coat with 1 Tbsp. Alfredo sauce, then fold the noodles that hang over the bowl’s rim back over its contents. Seal this using a pastry brush and the remaining Alfredo sauce.

Bake the dish for about an hour and 15 minutes, until the exterior is golden-brown, and let it sit for at least 20 minutes (otherwise it will lose its shape).

When cool enough, use a butter knife to carefully separate lasagna from bowl. Cover bowl with a rimmed baking sheet or large serving platter and carefully flip entire thing in one motion. Serve while warm.