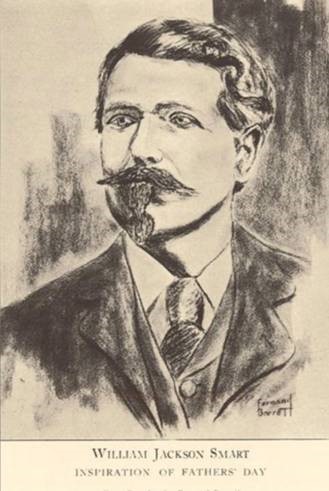 The nation’s first Father’s Day was celebrated on June 19, 1910, in the state of Washington according to history.com. However, it was not until 1972—58 years after President Woodrow Wilson made Mother’s Day official—that the day honoring fathers became a nationwide holiday in the United States. Father’s Day 2022 will occur on Sunday, June 19.

The “Mother’s Day” we celebrate today has its origins in the peace-and-reconciliation campaigns of the post-Civil War era. During the 1860s, at the urging of activist Ann Reeves Jarvis, one divided West Virginia town celebrated “Mother’s Work Days” that brought together the mothers of Confederate and Union soldiers.

Did you know? There are more than 70 million fathers in the United States.

However, Mother’s Day did not become a commercial holiday until 1908, when–inspired by Jarvis’s daughter, Anna Jarvis, who wanted to honor her own mother by making Mother’s Day a national holiday–the John Wanamaker department store in Philadelphia sponsored a service dedicated to mothers in its auditorium.

Thanks in large part to this association with retailers, who saw great potential for profit in the holiday, Mother’s Day caught on right away. In 1909, 45 states observed the day, and in 1914, President Woodrow Wilson approved a resolution that made the second Sunday in May a holiday in honor of “that tender, gentle army, the mothers of America.”

The campaign to celebrate the nation’s fathers did not meet with the same enthusiasm–perhaps because, as one florist explained, “fathers haven’t the same sentimental appeal that mothers have.”

On July 5, 1908, a West Virginia church sponsored the nation’s first event explicitly in honor of fathers, a Sunday sermon in memory of the 362 men who had died in the previous December’s explosions at the Fairmont Coal Company mines in Monongah, but it was a one-time commemoration and not an annual holiday.

The next year, a Spokane, Washington, woman named Sonora Smart Dodd, one of six children raised by a widower, tried to establish an official equivalent to Mother’s Day for male parents. She went to local churches, the YMCA, shopkeepers and government officials to drum up support for her idea, and she was successful: Washington State celebrated the nation’s first statewide Father’s Day on June 19, 1910.

Slowly, the holiday spread. In 1916, President Wilson honored the day by using telegraph signals to unfurl a flag in Spokane when he pressed a button in Washington, D.C. In 1924, President Calvin Coolidge urged state governments to observe Father’s Day.

Today, the day honoring fathers is celebrated in the United States on the third Sunday of June: Father’s Day 2021 occurs on June 20.

In other countries–especially in Europe and Latin America–fathers are honored on St. Joseph’s Day, a traditional Catholic holiday that falls on March 19.

Many men, however, continued to disdain the day. As one historian writes, they “scoffed at the holiday’s sentimental attempts to domesticate manliness with flowers and gift-giving, or they derided the proliferation of such holidays as a commercial gimmick to sell more products–often paid for by the father himself.”

During the 1920s and 1930s, a movement arose to scrap Mother’s Day and Father’s Day altogether in favor of a single holiday, Parents’ Day. Every year on Mother’s Day, pro-Parents’ Day groups rallied in New York City’s Central Park–a public reminder, said Parents’ Day activist and radio performer Robert Spere, “that both parents should be loved and respected together.”

Paradoxically, however, the Great Depression derailed this effort to combine and de-commercialize the holidays. Struggling retailers and advertisers redoubled their efforts to make Father’s Day a “second Christmas” for men, promoting goods such as neckties, hats, socks, pipes and tobacco, golf clubs and other sporting goods, and greeting cards.

When World War II began, advertisers began to argue that celebrating Father’s Day was a way to honor American troops and support the war effort. By the end of the war, Father’s Day may not have been a federal holiday, but it was a national institution.

In 1972, in the middle of a hard-fought presidential re-election campaign, Richard Nixon signed a proclamation making Father’s Day a federal holiday at last. Today, economists estimate that Americans spend more than $1 billion each year on Father’s Day gifts.

William Jackson Smart was a twice-married, twice-widowed Civil War veteran and father of 14 children, one of whom dedicated her life to the creation of Father’s Day in honor of her devoted and selfless dad.

The story goes that William’s daughter, Sonora Smart Dodd, was attending one of the first official Mother’s Day services in 1909 at her church in Spokane, Washington, when she had an epiphany—if mothers deserved a day in honor of their loving service, why not fathers?

When Sonora was 16, her mother Ellen died, leaving William as a single father to Sonora and her five younger brothers. And by Sonora’s account, he performed brilliantly.  “I remember everything about him,” Sonora said many years later to the Spokane Daily Chronicle. “He was both father and mother to me and my brothers and sisters.”

Sonora’s mother Ellen, herself a widow, had three children from a previous marriage. On top of that, William had also been married and widowed before he met Sonora’s mother. William had five children with his first wife, Elizabeth, who were already grown when William became a widower for the second time.

In 1910, Sonora brought a petition before the Spokane Ministerial Alliance to recognize the courage and devotion of all fathers like William on June 5, her dad’s birthday. The local clergy liked the idea of a special Father’s Day service, but couldn’t pull something together so quickly, so they settled for June 19, the third Sunday in June.

On that first Father’s Day in 1910, church sermons across Spokane were dedicated to dear old dad, red and white roses were passed out in honor of living and deceased fathers, the mayor of Spokane and governor of Washington issued proclamations, and Sonora found her calling. She would spend much of the next 60 years pushing for the official recognition of Father’s Day as a national holiday.

William Jackson Smart, the original inspiration for Father’s Day, was born in Arkansas in 1842 and records show that he enlisted as a Union soldier there in 1863. That was odd, because Arkansas was a Confederate state. Spokane resident, Jerry Numbers, who owned what had been Sonora’s home, researched the Smart family history for Spokane’s Father’s Day Centennial Celebration in 2010. Numbers says that William, in fact, fought for both sides in the Civil War.

Driving a supply wagon for Confederate troops, William was captured in the Battle of Pea Ridge, a decisive Union victory in Arkansas in 1862. Rather than languish in a prisoner of war camp, he opted to join the northern cause. As indication that William was a “Reb” before he was a “Yank,” Sonora was a member of both the United Daughters of the Confederacy and the Daughters of Union Veterans.

When Sonora was born in 1882, William and his second wife Ellen were living on a “coal ranch” in Jenny Lind, Arkansas. Instead of mining for coal, William and the family “farmed” it, collecting chunks of coal from the surface and carting it to town for sale. William and Ellen sold the property in 1887 for $5,000—a handsome sum at the time—and the family traveled by train to a new homestead outside of Spokane. (The farm in Arkansas would turn out to be one of the most productive coal fields in the entire nation.)

It was on the Smart’s family farm near Creston, Washington, where William’s second wife died and he became a widower again at the age of 56. His youngest son was seven or eight and Sonora, his oldest child still living at home, was 16. In Sonora’s memories of this difficult time, she recalls her father as a “great home person,” a man who exemplified fatherly love and protection.

That first Father’s Day celebration in Spokane might have remained a local tradition if not for the perseverance of Sonora Smart Dodd. Following the 1910 Father’s Day observance, William Jennings Bryan, one of the most famous politicians of the time, sent Sonora a congratulatory letter, which sparked a rush of national media attention on Sonora and Spokane.

Sonora won the support of her congressmen, who began to lobby for the creation of a national holiday. In 1916, President Woodrow Wilson celebrated Father’s Day in Spokane during a visit to Washington. We don’t know if William Jackson Smart was there to shake the president’s hand, but it would have been one of his last Father’s Days. William died in 1919.

Much more than a Father’s Day booster, Sonora Smart Dodd was an accomplished artist, poet, children’s book author, funeral home director, and founding member of just about every civic organization in Spokane. But she never let go of her determination to give fathers like hers the recognition they deserved.

It wasn’t until 1972, six years before Sonora’s death at the age of 96, that President Richard Nixon finally signed a Congressional resolution declaring the third Sunday in June to be Father’s Day. Her dad, no doubt, would have been proud.