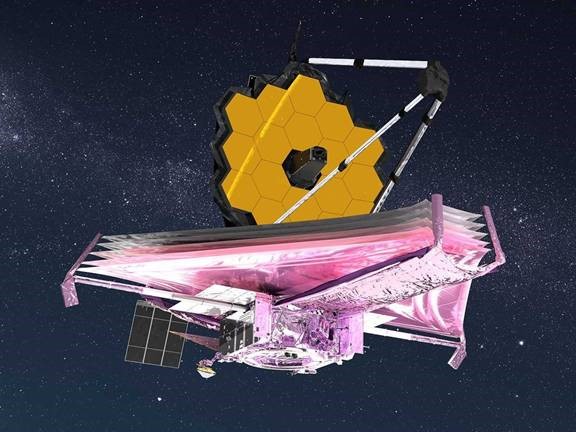 A rocket carrying the $10 billion dollar invention blasted off Christmas morning and powered up as planned, providing astronomers with a long-awaited gift according to smithsonianmag.com

In an incremental sign the universe rewards the diligent behavior and patience of astronomers out to study it, conditions cleared enough this Christmas morning for the launch of the biggest, most powerful and most expensive telescope ever. At approximately 7:20 a.m. ET the James Webb Space Telescope, a scientific gift folded up and wrapped in a rocket, took off from its launch site in the South American country of French Guiana. The Christmas gift to the world will ditch its box and open up slowly on its own during a multi-step, month-long journey to its orbit in outer space.

More than a decade has passed since the telescope was first expected to launch, a delay accompanied by an escalating price tag that soared roughly $9 billion above budget. At one point, the U.S. House of Representatives even threatened to cancel the craft. And this year alone, the telescope was delayed several times. But scientists say the investment in time and money will be worth the wait and cost, if the craft performs as expected.

“Remarkable enduring achievements of human hand and mind, be it the temples of Mahabalipuram, the pyramids of Giza, the Great Wall or the Sistine Chapel have all taken time and expense,” Priyamvada Natarajan, an astrophysicist at Yale, told the New York Times. “I truly see JWST as one such monument of our times.”

The cooperative project between the space agencies of the United States, Canada and Europe will be able to do things its famed predecessor, the Hubble Space Telescope, couldn't. The Hubble launched into low-Earth orbit in 1990 and in the three decades since has been sending stunning images of stars and galaxies unlike anything seen before. The telescope’s "spectacular images have captured the imagination for decades, and will continue to inspire humanity for years to come," said Thomas Zurbuchen, associate administrator for science at NASA headquarters in Washington, D.C., in a statement.

The James Webb Telescope has a mirror roughly six times the collecting size of Hubble’s—and it is 100 times more sensitive. Scientists built the telescope to see in infrared and it can look further into space, and thus further back in time, than anything previously constructed. While Hubble can see back 400 billion years after the Big Bang, Webb can possibly look back 100 billion years after the event.

"Some of the deep field work that Hubble has done, they would look in a particular field for a couple of weeks," Randy Kimble, a project scientist for the James Webb Space Telescope, told Space.com. "Webb can reach that kind of sensitivity limit in seven or eight hours."

As reporter Shi en Kim reported for Smithsonian magazine earlier this year, the telescope is an astronomical Swiss Army knife of sorts, with—when all of its tools are clicked open in space—the ability to study a host of new things about the universe. Webb will help scientists understand how early galaxies formed and grew, detect possible signatures of life on other planets, watch the birth of stars, study black holes from a different angle, and likely discover unexpected truths.

But Webb’s deployment isn’t without risks. Anxious scientists will have to watch from Earth as their creation unfolds over its 30-day, one-million-mile journey to the spot beyond the moon where it will orbit the sun. Just 30 minutes after launch a solar array will unfold and two hours later a high gain antenna will deploy. Varied other parts—including a near infrared camera; an 18-segment, 21.3-foot, hexagonal gold and beryllium mirror; and an elaborate five-layer, tennis-court-sized Kapton shield that will block heat and light from the sun, Earth and moon—will all hopefully move into place in a multi-step display of metallic origami, creating an angular, high-tech object weighing more than 13,000 pounds. After that unfurling, over the course of several months, scientists will check the optics and telescope alignment, and then calibrate all of the instruments. If everything goes as planned, Webb will take its first science-quality images three months after launching, and three months after that begin routine operation.

The lead up to the telescope’s launch hasn’t been without controversy. In March, four astronomers wrote an essay in Scientific American calling for the telescope to be named something different, citing James Webb’s position as a government administrator during a period when thousands of gay men and women lost their government jobs as potential security risks. More than 1200 individuals signed a petition requesting a name change. The NASA administrator who named the telescope in 2002 said that he was unaware of any evidence that Webb was responsible for the Lavender Scare, as the period was called. In September, NASA issued a statement that said they found no evidence warranting a name change to the telescope, and the original stayed.

Should something go wrong with JWST while in space, NASA has no capability to repair the $10 billion craft, but the agency is already hoping to explore refueling it robotically. Assuming all goes right, the telescope will be delivering astronomical gifts to Earth for years to come.