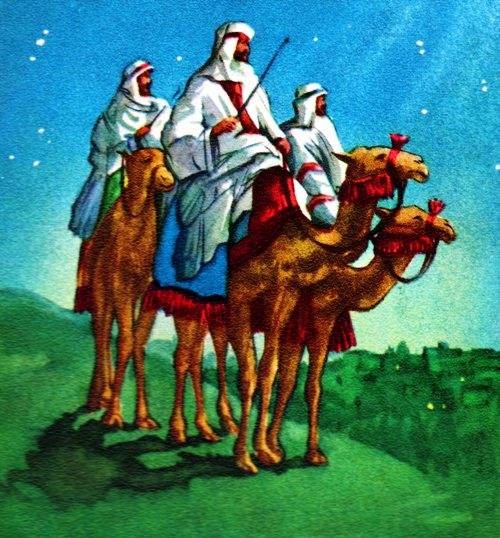 Image: The visit of the 3 Magi – clipartpanda.com

Not to be confused with "The Twelve Days of Christmas," an English Christmas song from the 16th century about gifts given before Christmas, Twelfth Night on January 5 -- according to the Church of England -- marks the last day of the Christmas season for Christians. Epiphany, also called Three Kings Day, begins the next day and commemorates the arrival of the Magi bringing gifts to the baby Jesus in the manger.

To replicate English wassail for a Twelfth Night dinner, serve cinnamon or ginger-flavored beer, hard apple cider or sparkling apple cider. Choose any British entree, such as roast beef, or opt for a Southern specialty such as gumbo in honor of Mardi Gras season, which officially begins on Twelfth Night and ends 47 days before Easter Sunday. For dessert, follow the Mardi Gras and Twelfth Night traditions of serving King's Cake, with a bean or plastic baby baked inside and frosted with purple, green and gold icing.

If you're finished with traditional Christmas gift-giving and receiving, set some new parameters for this part of a Twelfth Night celebration; set monetary limits, conduct a "white elephant" gift exchange, ask everyone to give a gift to charity or ask for only homemade gifts. Or keep up traditions instituted in the 1870s by the Mardi Gras "krewe" called the Twelfth Night Revelers and give small gifts such as gold-foil medallions, beaded necklaces and homemade decorations or toys.

Follow long-established customs and remove the decorations from your Christmas tree on Twelfth Night. Use the tree for a bonfire or create a replica of the traditional "Holly Man," representing a pagan folklore creature, by tying the Christmas tree branches onto a scarecrow-like effigy for your yard. To celebrate the apples used to make wassail, make candied apples or wreaths from dried apple slices. In the evening, burn a yule log.

In honor of traditional Twelfth Night "mumming," a kind of pantomime play based on the story of St. George and a dragon, read the story aloud or create a Twelfth Night table centerpiece based on the festive hats worn by the play's characters. As an alternative literary activity, read from William Shakespeare's play "Twelfth Night," which first was performed on Jan 5,1601, and play charades, acting out Shakespearean play titles.

The Feast of Epiphany signifies the Magi acknowledging Jesus Christ as King. This occasion for feasting celebrates brotherhood and sharing in faith. According to western Christian custom, Epiphany falls on the 12th day after Christmas, or Jan. 6. In many countries, including the United States, the feast is celebrated on the first Sunday following Jan. 1. Epiphany is associated with numerous customs that vary by country.

Bulgarians celebrate Epiphany with a special loaf of bread, called a cluster loaf, for their festive dinner. This accompanies a main course of pickled cabbage leaves stuffed with grouts drizzled with water and sauerkraut juice. A sweet follow-up for this Bulgarian main course is Stara Zagora-style wheat.

Tuscan tradition calls for appetizer platters of Tuscan cheeses and salamis. Broccoli accompanied by crostini with chicken liver pate often follows appetizers. The pasta course might include a tubular pasta, such as penne, tossed with hot Tuscan olive oil, or a fancier stuffed ravioli with rich duck or rabbit ragu. An abundance of pork sausages served with pieces of lamb and pork usually appears as the main course at Epiphany dinners.

Epiphany, known as the holiday of light, finds representation with a dish of oranges, blood oranges, clementines or tangerines on the dinner table. Dried figs nestle among the dessert treats, which include spicy, exotic cakes.

Because the Magi haled from the Orient, spicy cake is a traditional Epiphany staple. It is customary to bake the Epiphany cake, or king cake, with a bean or small trinket hidden inside. Whomever receives the slice containing the bean is named king of the feast. Sometimes the baker hides two trinkets inside the cake: one for the king and another for the queen. European recipes for Epiphany cake vary from almond-paste-filled pastries to icing-layered confections.

In England, the Epiphany dinner traditionally include a drink called lamb's wool. This cider- or ale-based beverage features roasted apples, sugar and spices. In some areas, it is customary to bless the apple trees during the celebration by dousing them with a libation of cider.

Blessing of the Home

One Epiphany custom is a blessing of the home. Blessed chalk marks the household entrance with the year and the inscription "CMB," which stands for the initials of the legendary Magi -- Caspar, Melchior and Balthasar -- as well as "Christus mansionem nenedicat," meaning "Christ, bless this home."