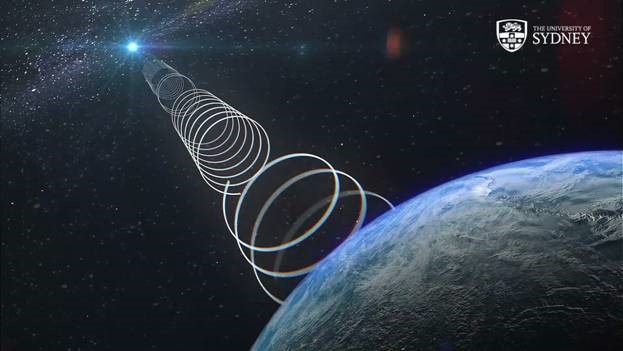 Astronomy experts have detected "unusual signals" coming from the center of the Milky Way Galaxy, leading experts to believe an undiscovered stellar object could be behind the strange radio waves according to this article from usatoday.com

Objects throughout the galaxy have changing magnetic fields that produce radio waves, according to NASA. During its life cycle, a star emits light across the electromagnetic spectrum, including some waves invisible to the human eye. The amount of light a star gives off depends on where it is in its cycle.

But the radio waves picked up by a team of international researchers are unusual for a variety of reasons. Ziteng Wang, lead author of a study on the findings published in The Astrophysical Journal and a doctoral candidate at the University of Sydney's school of physics, said the object's brightness varies dramatically, and it will randomly switch on and off.

"The strangest property of this new signal is that it is has a very high polarisation. This means its light oscillates in only one direction, but that direction rotates with time," Wang said in a statement. "We’ve never seen anything like it."

Wang added his team originally thought the signal came from a pulsar, a heavily dense, rapidly spinning star that has collapsed and as a result, gives off solar flares. Solar flares can go on for minutes to hours, making them in, a sense, random. That was dismissed as a cause, however, because the radio waves "don’t match what we expect from these types of celestial objects."

The team from Australia, Germany, the United States, Canada, South Africa, Spain and France made the discovery in west Australia. The object, named after the radio telescope and space coordinates on which it was found, ASKAP J173608.2-321635, was discovered as part of a project to find never-before-seen space objects.

When the radio wave was first picked up, Tara Murphy, Wang's doctoral supervisor and professor from the Sydney Institute for Astronomy, said its behavior was "extraordinary."

"This object was unique in that it started out invisible, became bright, faded away and then reappeared," Murphy said.

Researchers received six radio waves over nine months last year, but when they tried to visually find it, nothing came up. It wasn't until a few weeks after they used radio telescope in South Africa that the signal once again appeared.

"Luckily, the signal returned, but we found that the behavior of the source was dramatically different – the source disappeared in a single day, even though it had lasted for weeks in our previous ASKAP observations," Murphy said.

No clear answer as to what is sending the radio waves has been determined, but Murphy hopes that as more powerful telescopes become available in the coming years, the mystery will be solved.