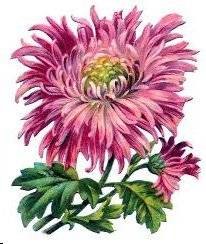 Everyone knows that they have a specific birthstone that is placed in jewelry and trinkets to signify the month they were born in. However, many people don't know that just like the stones, each month has a flower or two as well, which symbolizes birth according to babiesonline.com. Here is the history and meaning behind your birth flower, the chrysanthemum.

The Chrysanthemum, which is closely related to the daisy is often referred to by cultivators and gardeners as "mums". It currently includes about 30 species of perineal flowering plants which are native to Asia and northeastern Europe. At one point there were more species of the Chrysanthemum but the species was split.

The Chrysanthemum can grow between 50-150cm tall, has deep leaves and large flower heads with dozens of petals. The Chrysanthemum is most commonly found in shades of white, pink, red and yellow.

In parts of Asia the Chrysanthemum petals are boiled in order to make a sweet drink known as Chrysanthemum tea. It is believed that this tea has many medicinal uses including curing influenza.

Fun and interesting fact: An ancient Chinese city was named Chu-Hsien, meaning "chrysanthemum city". The flower was introduced into Japan probably in the 8th century CE, and the Emperor adopted the flower as his official seal. There is a "Festival of Happiness" in Japan that celebrates the flower.