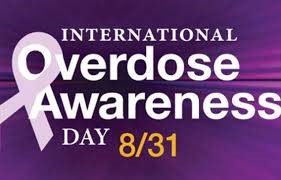 International Overdose Awareness Day is the world’s largest annual campaign to end overdose, remember without stigma those who have died and acknowledge the grief of the family and friends left behind. Time to Remember. Time to Act.

International Overdose Awareness Day according to wikipedia.org is a global event held on 31 August each year. Its purpose is to raise awareness of overdoses, reduce the stigma of drug-related deaths and acknowledge the grief felt by families and friends.  It was initiated in 2001 in Australia by SJ Finn who was managing a needle and syringe program at The Salvation Army Crisis Centre in St Kilda, Victoria. It has been run by the Penington Institute since 2012.

The first day, held in 2001 in Australia, saw 6,000 silver ribbons distributed across the country and into New Zealand. Since then the day has grown and is recognized in over 40 countries. So too, sadly, has the death toll from overdose continued to rise.

Vigils were held in Vancouver in 2018, where 38 people died of overdose in July 2018. Firefighters in the city attended 6,234 overdose calls in 2017. The Ontario Pharmacists Association issued warnings about the dangers of prescription opioids.

In Philadelphia, where 1,217 people died of opioid overdose in 2017 (the highest death rate of any major U.S. city), there were calls for an overdose prevention site in 2018.[6] The Alcoholism & Drug Abuse Council of Orange County, New York organised a candlelight vigil and remembrance ceremony at the Goshen Village Square. Guests were encouraged to bring a photo or other memento of a loved one.

In 2020, recovery arts organisations were planning live-stream public performances in four cities of the United Kingdom, replicating a successful initiative of 2019. However, they decided to create videos that would be broadcast on Facebook and YouTube due to the social distance measures of the COVID-19 Pandemic.

Hosting your own International Overdose Awareness Day event or activity, or attending one, is a powerful way to stand together to remember people who have lost their lives to overdose.