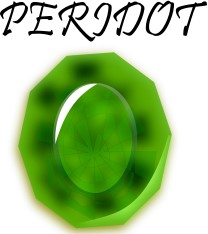 The lime, green, gentle Peridot gem according to birthstonezodiac.com, the August birthstone is associated with less tangible qualities of peace, good fortune and happiness. The mellow glow of the Peridot, a soft, light green under the starlit sky or lantern has earned this lovely gemstone the title ‘The Evening Emerald’. The august birthstone is associated with prosperity, growth, dignity and love. It is also believed that the stone has the power to ward away Evil and nightmares, bestowing peace and progress in one’s life.

The stone is also known to be the ideal gift for a couple’s 16th Anniversary. Associated with love, loyal august birthstone, commitment and harmony, the stone has a beautiful poem associated with it. “Wear a Peridot or for thee, No conjugal fidelity, The August born without this stone,`Tis said, must live unloved alone”.

The peridot, a variety of olivine, is a It is a yellowish-green, lustrous stone, also called Chrysolite. The stone is of igneous origin, formed due to volcanic activity, and is found in shades of pale green, olive-green and lime. Ironically, the Peridot has long been revered by pirates as a talisman to ward off evil.

Traces of the august gemstone, was found in ancient Egypt. In ancient times, Egypt was the primary source of the Peridot, called the ‘Gem of the Sun’. An interesting revelation is that the gemstones worn by the Queen Cleopatra was not Emeralds as it was popularly believed but its evening cousin, the Peridot.

In Hawaii, the stone symbolizes the tears of the Goddess Pele, owing to its yellowish tinge.

References to the august gemstone have also been found in the Bible, going by its Hebrew name ‘Pitdah’.

The ancients Egyptian priests believed that the Peridot contained the forces of nature and used cups encrusted with this gemstone to achieve communion with their Nature Gods.The World Of The Peridot.

Etymology Of The August birthstone

august birthstone 4The etymology of the Peridot ( pronounced pear-a-doe) is not entirely clear. Owing to its pronunciation, many believe the word Peridot is derived from the French word ‘Peritot’ meaning unclear, a reference to the yellowish tinge in the stone yielding it translucent. Most scholars however, believe the Peridot is derived from the Arabic word  ‘Faridat’ which means gem. A new theory is that the Greek word ‘peridona’ which means richness forms the root of the word Peridot. Most modern scholars subscribe to the Faridat theory.

Scientific Make Up – Composition Of The August Birthstone

The peridot stone belongs to the Forsterite-Fayalite mineral family, part of the Olivine group. The stone is one of the “Idiochromatic” gems, which means that   its color comes from the fundamental chemical composition of the mineral itself rather then the impurities. The stone, therefore, does not exhibit multiple colors, only different shades of green with a dash of yellow in them. The Peridot is one of the few gemstone found in one color. The Lesser Known August Birthstone

The traditional color of the Peridot is lime green, a lovely color for silver and platinum jewelry. Owing to its green hues, the stone has been associated with Bibilcal and Christian symbolism, as many elements of the religion and culture are associated with the color green. Green represents nature, prosperity, life and progress. The most expensive Peridots are sparkling lime-green without brown or yellow hues. The color of the August birthstone ranges from lime green to olive green, dark green and yellowish green. Chrysolite is the golden yellow variant of Peridot.

Olivine is a common mineral in ultramafic and mafic rocks, found in Lavas and peridotite Xenoligth rocks of the mantle that lava carries to the surface. Peridot is a form of Olivine of volcanic origin. Although the olivine mineral is abundant, Peridot is rare. The gem is also mined in Egypt, Arkansas and Arizona on the San Carlos reservations. Other sources of the stone are Nevada, Hawaii, Nex Mexico, Australia, Kenya, China, Brazil, Myanmar, Pakistan, South Africa, Tanzania and Sri Lanka. Peridot crystals have been found in Pallasite meteorites as well.

The birthstone is believed to heal the lungs, spleen, intestines, lymph and breast of ailments. Amulets with Peridot stones are known to be an effective remedy for Asthma, Sinus, thyroid, eye and liver infections. These stones are known also to to alleviate depression, anger, stress, jealousy and other negative emotions.

The August birthstone enhances confidence and self-esteem in wearers. The stone is known to be rejuvenating and invigorating promoting clarity of thought.

Value Of The August Birthstone

The Perdidot gemstone has recently become popular owing to its numerous qualities. Most Many gemologists estimate that large Peridots rival Tanzanite and other gems in price. Most large gemstones possess carbon inclusions disqualifying the stone from the precious stones category, however the Peridot comes in calibrated sizes so that the stones are faceted to be placed directly in a mounting.

The healing power of the stone has made the Peridot a popular gem to possess in one’s collection. Its gentle, mild-green color and soft glow has attracted millions of buyers worldwide, placing the Peridot among the fastest selling gemstones in the market today.