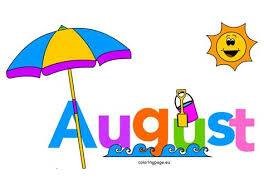 "August rushes by like desert rainfall,
A flood of frenzied upheaval,
Expected,
But still catching me unprepared.
Like a matchflame
Bursting on the scene,
Heat and haze of crimson sunsets.
Like a dream
Of moon and dark barely recalled,
A moment,
Shadows caught in a blink.
Like a quick kiss;
One wishes for more
But it suddenly turns to leave,
Dragging summer away."
-  Elizabeth Maua Taylor

"In August, the large masses of berries, which, when in flower, had attracted many wild bees, gradually assumed their bright velvety crimson hue, and by their weight again bent down and broke their tender limbs."
-  Henry David Thoreau

"And hate the bright stillness of the noon
without wind, without motion.
the only other living thing
a hawk, hungry for prey, suspended
in the blinding, sunlit blue.

And yet how gentle it seems to someone
raised in a landscape short of rain—
the skyline of a hill broken by no more
trees than one can count, the grass,
the empty sky, the wish for water."
-  Dana Gioia, California Hills in August

"Fairest of the months!
Ripe summer's queen
The hey-day of the year
With robes that gleam with sunny sheen
Sweet August doth appear."
-  R. Combe Miller

"How sociable the garden was.
We ate and talked in given light.
The children put their toys to grass
All the warm wakeful August night."
-  Thomas Gunn, Last Days at Teddington

"Birds fly in formation;
Tree leaves sway from side to side;
Clouds gather in small huddles,
discussing the weather;
Grass shoots shoot up once more,
their roots replenished;
A Phoenix nearby hums his Ode;
Tranquility is in place,
after the long bitter wait;
Alive, now, is the world."
-  J. I. Stuart, August

"When the blackberries hang
swollen in the woods, in the brambles
nobody owns, I spend

all day among the high
branches, reaching
my ripped arms, thinking

of nothing, cramming
the black honey of summer
into my mouth; all day my body

accepts what it is. In the dark
creeks that run by there is
this thick paw of my life darting among

the black bells, the leaves; there is
this happy tongue."
-  Mary Oliver, August

"August, the eighth month of the current Gregorian calendar and the third month of Summer’s rule, derives its name from Augustus (Augustus Caesar).  The traditional birthstone amulets of August are the peridot and the sardonyx; and the gladiolus and the poppy are the month’s traditional flowers.  August is shared by the astrological signs of Leo the Lion and Virgo the Virgin, and is sacred to the following Pagan deities: Ceres, the Corn Mother, Demeter, John Barleycorn, Lugh, and all goddesses who preside over agriculture.  During the month of August, the Great Solar Wheel of the Year is turned to Lammas, one of the four Grand Sabbats celebrated each year by Wiccans and modern Witches throughout the world."
-  Secrets of a Witch

"The English winter, ending in July
To recommence in August."
-  Lord Byron

"This was one of those perfect New England days in late summer where the spirit of autumn takes a first stealing flight, like a spy, through the ripening country-side, and, with feigned sympathy for those who droop with August heat, puts her cool cloak of bracing air about leaf and flower and human shoulders."
-  Sarah Orne Jewett, The Courting of Sister Wisby, 1887

"Let me enjoy this late-summer day of my heart while the leaves are still green and I won't look so close as to see that first tint of pale yellow slowly creep in. I will cease endless running and then look to the sky ask the sun to embrace me and then hope she won't tell of tomorrows less long than today. Let me spend just this time in the slow-cooling glow of warm afternoon light and I'd think I will still have the strength for just one more last fling of my heart."
- John Bohrn, Late August

"August rushes by like desert rainfall,
A flood of frenzied upheaval,
Expected,
But still catching me unprepared.
Like a match flame
Bursting on the scene,
Heat and haze of crimson sunsets.
Like a dream
Of moon and dark barely recalled,
A moment,
Shadows caught in a blink.
Like a quick kiss;
One wishes for more
But it suddenly turns to leave,
Dragging summer away."
-  Elizabeth Maua Taylor, August

"When summer opens, I see how fast it matures, and fear it will be short; but after the heats of July and August, I am reconciled, like one who has had his swing, to the cool of autumn."
-  Ralph Waldo Emerson

"Further in Summer than the Birds
Pathetic from the Grass
A minor Nation celebrates
Its unobtrusive Mass.

No Ordinance be seen
So gradual the Grace
A pensive Custom it becomes
Enlarging Loneliness.

Remit as yet no Grace
No Furrow on the Glow
Yet a Druidic Difference
Enhances Nature now."
-  Emily Dickinson, Further in Summer Than the Birds

"The brilliant poppy flaunts her head
Amidst the ripening grain,
And adds her voice to sell the song
That August's here again."
-  Helen Winslow