June Solstice: Longest and Shortest Day of the Year 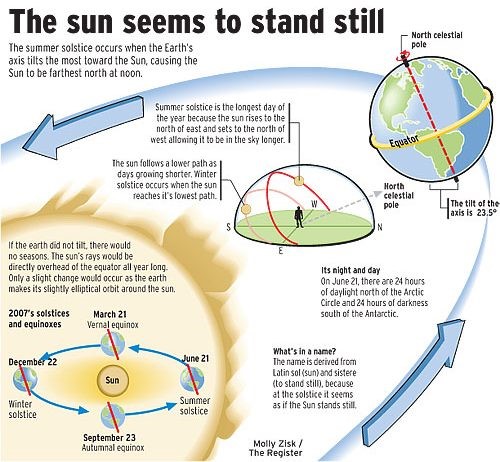 The date varies between June 20 and June 22, depending on the year, and the local time zone.

Zenith Furthest Away from the Equator

A solstice happens when the sun's zenith is at its furthest point from the equator. On the June solstice, it reaches its northernmost point and the Earth’s North Pole tilts directly towards the sun, at about 23.4 degrees.

It's also known as the northern solstice because it occurs when the sun is directly over the Tropic of Cancer in the Northern Hemisphere.

11 Facts About the June Solstice

3. When the Sun Seems to Stand Still - Solstice comes from the Latin words sol, meaning Sun and sistere, meaning to come to a stop or stand still. On the day of the June solstice, the Sun reaches its northernmost position, as seen from the Earth. At that moment, its zenith does not move north or south as during most other days of the year, but it stands still at the Tropic of Cancer. It then reverses its direction and starts moving south again.

The opposite happens during the December solstice. Then, the Sun reaches its southernmost position in the sky - Tropic of Capricorn - stands still, and then reverses its direction towards the north.

Ten Things About the December Solstice

4. It Occurs at the Same Time all over the world. Technically, the June solstice is the exact instant of time when the Sun is directly overhead the Tropic of Cancer. In 2018, this will happen on June 21 at 11:07 UTC.

6. It's the First Day of Summer - depending on who you ask. Astronomers and scientists use the date of the June solstice to mark the beginning of summer in the Northern Hemisphere and winter in the Southern Hemisphere. For meteorologists, on the other hand, summer began almost three weeks ago, on June 1.

How are seasons defined? In many Northern Hemisphere cultures, the day is traditionally considered to be the mid-point of the summer season. Midsummer celebrations on or around the Northern summer solstice are common in many European countries.

Is this timing a coincidence? The Earth's distance from the Sun has very little effect over the Seasons on Earth. Instead, it the tilt of Earth's rotational axis, which is angled at around 23.4 degrees, that creates seasons.

The direction of Earth's tilt does not change as the Earth orbits the Sun - the two hemispheres point towards the same direction in space at all times. What changes as the Earth orbits around the Sun is the position of the hemispheres in relation to the Sun - the Northern Hemisphere faces towards the Sun during the June solstice, thus experiencing summer. The Southern Hemisphere tilts away from the Sun and therefore enjoys winter during this time.

In the Southern Hemisphere, where this day marks the winter solstice, the earliest sunset happens a few days before the solstice, and the latest sunrise occurs a few days after it.

11. It's Celebrated Around the World - The June solstice holds a special place of celebration in many cultures. People around the world celebrate the day with feasts, picnics, dance, and music.

'Solstice' (Latin: 'solstitium') means 'sun-stopping'. The point on the horizon where the sun appears to rise and set, stops and reverses direction after this day. On the solstice, the sun does not rise precisely in the east, but rises to the north of east and sets to the north of west, meaning it's visible in the sky for a longer period of time.

Although the June solstice marks the first day of astronomical summer, it's more common to use meteorological definitions of seasons, making the solstice midsummer or midwinter.

Over the centuries, the June solstice has inspired countless festivals, midsummer celebrations and religious holidays.

One of the world's oldest evidence of the Summer Solstice's importance in culture is Stonehenge in England, a megalithic structure which clearly marks the moment of the June Solstice.

In the Southern Hemisphere, where the June solstice is known as the shortest day of the year, it marks the first day of astronomical winter, but the middle of winter in meteorological terms.

On the June solstice, the midnight sun is visible (weather permitting) throughout the night, in all areas from just south of the Arctic Circle to the North Pole.

On the other side of the planet, south of the Antarctic Circle there's Polar Night, meaning no Sunlight at all, on the June Solstice.

Even though most people consider June 21 as the date of the June Solstice, it can happen anytime between June 20 and June 22, depending on which time zone you're in. June 22 Solstices are rare - the last June 22 Solstice in UTC time took place in 1975 and there won't be another one until 2203.

The varying dates of the solstice are mainly due to the calendar system – most western countries use the Gregorian calendar which has 365 days in a normal year and 366 days in a Leap Year.

A tropical year is the time it takes the Earth to orbit once around the Sun. It is around 365.242199 days long, but varies slightly from year to year because of the influence of other planets. The exact orbital and daily rotational motion of the Earth, such as the “wobble” in the Earth's axis (precession of the equinoxes), also contributes to the changing solstice dates.

Moving to Other Seasons

After the June solstice, the sun follows a lower and lower path through the sky each day in the Northern Hemisphere until it reaches the point where the length of daylight is about 12 hours and eight to nine minutes in areas that are about 30 degrees north or south of the equator.

Areas 60 degrees north or south of the equator have daylight for about 12 hours and 16 minutes. This is the September Equinox, the Autumnal Equinox in the Northern Hemisphere.

Earth does not move at a constant speed in its elliptical orbit. Therefore the seasons are not of equal length: the times taken for the sun to move from the March Equinox to the June Solstice, to the September equinox, to the December solstice, and back to the March equinox are roughly 92.8, 93.6, 89.8 and 89.0 days respectively.

The consolation in the Northern Hemisphere is that spring and summer last longer than autumn and winter.