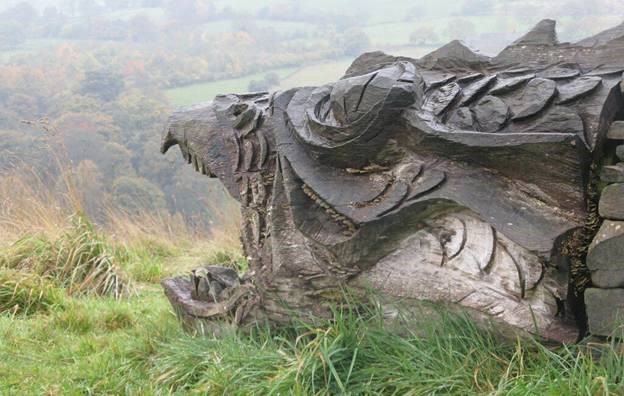 Image: The dragon looking out over the land - atlasobscura.com

Deepcar, England:  A stone wall commemorates the legend of a ferocious dragon who literally got his butt kicked by a knight according to atlasobscura.com.

According to legends, a bat-winged, scaley dragon terrorized the villagers who lived near the region of Wantley (modern-day Wharncliffe Crags). The beast was massive and could swallow trees and buildings. The dragon was nearly invincible to any weapons, save for one rather sensitive spot.

A knight by the name of Moore took time off from his usual drinking and womanizing to end the dragon’s reign of terror. Wearing a specially designed suit of armor covered with spikes, Moore battled the dragon. The fight ended when Moore delivered a fatal blow by kicking the monster right in, what the original English ballad declares as, the “arse-gut.”

The true story behind this unusual legend, according to historians, involved a legal dispute in 1573. A lawsuit was taken against the Lord of the Manor of Sheffield, George Talbot, the sixth Earl of Shrewsbury. The lord was accused of misappropriating funds meant to pay for civic works, church upkeep, and helping the poor. The crusading lawyer who took the case on behalf of the people of Sheffield was named George More.

The ribald comedy of the legend has made this a rather popular story retold in various forms. The ballad was included in Thomas Percy’s Reliques of Ancient English Poetry. From there, it inspired a burlesque opera by Henry Carey and a novel by Owen Wister, both of which were highly successful. The Sheffield town hall even has a bas-relief frieze depicting Moore and the dragon proudly displayed at its entrance.

The most unique tribute to the Dragon of Wantley is a stone wall that snakes its way down a hill not far from where the monster was said to have been vanquished. The wall ends at a fantastically carved dragon head with its mouth agape. This gives the structure the appearance of a serpent moaning while experiencing its final moments.

Wharncliffe Crags is located six miles (10 kilometers) northwest of the city of Sheffield in South Yorkshire, England. The wall depicting the Dragon of Watley is located on the southern edge of Bitholmes Wood (Grid Ref:SK 295 959).

Visitors can find the Dragon's Den, the supposed cave where the creature lived on the southern end of the crags.