Scientists Uncover The Evolutionary Reason That We Roll Our Eyes 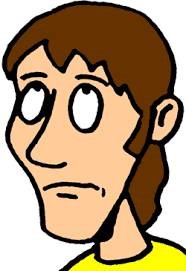 What does the 15-year-old do when she can't go out with her senior-year friends on a school night because her bossy parents are forcing her to wash the dishes asks this article from hermoments.com? She pulls the ultimate teenage power move, a long, exaggerated, eye roll. But the sassy roll of the eyes isn't just a symptom of feminine teen angst. The science behind "ocular motion" goes back farther than most people think.

Psychologist Lisa Damour has a simple answer for The New York Times regarding that teenage eye roll: "By rolling her eyes while putting away the plates, the girl establishes that she's an independent state electing to yield, for now, to the regional power." Wait...what?

While the girl didn't wish to put away the dishes, she still did it, but she made it clear that it was a reluctant action. She may have wanted to fight (whether that be with words or fists), but evolution told her otherwise. Experts have come up with a few theories why.

There are years of evolution packed in that one ocular motion. Some evolutionary theories suggest women roll their eyes to express dominance over other women, but we know that's not always the case. Just about everyone has rolled their eyes — and had eyes rolled at them. So what gives?

Researchers dug into the question and explored tendencies of men and women. While men tend to convey their aggression directly, via shouting, kicking, punching, etc., women typically gravitate towards indirect aggression tactics. This shows up in a handful of ways.

So why do women choose these less conspicuous strategies? University of Ottawa's Dr. Tracy Vaillancourt conducted a 2013 study on indirect aggression tactics used by women, and what she found was eye-opening.

Show us Those Muscles, Chad

Historically, men have typically been more inclined to take risks that would affect their physicality. They fight their competitors, risking their lives in the process, which has been going on since the dawn of mankind. Historically, women never had that "luxury."

When you're a mama with kids to take care of, you just have to let some things slide (though you may want to knock someone's teeth out). Rather than physically quarreling with female enemies, women have historically chosen to gesture to other women that they're not to be messed with via indirect aggression maneuvers.

"Women typically don't use verbal or physical aggression. There're many different reasons for this, but I think that there would have been some selection pressure involved," Dr. Tracy Vaillancourt explained. There are some advantages to this.

"There are more benefits to indirect aggression," Dr. Vaillancourt continued. "For example, you could harass competitors, and attract more mates, all without engaging in a physical confrontation." Why exert yourself when you can simply roll your eyes? Of course, the science is never so simple.

According to Dr. Vaillancourt, ladies have become so accustomed to engaging in indirect aggression that they have physiological reactions to just the sight of an eye roll. But apparently, men are practically immune to the powers of the eye roll.

"An eye roll can trigger our flight-or-fight system," Dr. Vaillancourt explained, continuing to say "there are studies to suggest that [the eye roll is] the most commonly used tactic." But this came with a much-needed clarification.

Modern women aren't rolling their eyes for the sake of their survival (they clutch their keys between their fingers for that). Instead, they may be using the move to signify something else.

Looking the Other Way

According to Mic, editor Forrest Wickman of Slate referenced a 1989 book, Human Ethology, which proposed the idea that the eye roll is a signal of rejection, a way to literally look away from what "we do not wish to see." It's almost as if the mind and body are connected...

A Reaction to Unpleasant Stimuli

“We often move the head in an intention movement to the side or rear, and this reaction to unpleasant visual and olfactory stimuli is also used as a gesture of arrogance," wrote Irenäus Eibl-Eibesfeldt, the author of Human Ethology.

Age is Just a Number

And though the angsty teen eye-rolling at her bossy parents while doing the dishes is a prime, even stereotypical, example of how and when indirect aggression is utilized, the eyes don't just stop rolling once you reach a certain age.

"We need to do some research at a seniors complex to see if they're still rolling their eyes, but I strongly suspect they are," Dr. Vaillancourt said with a smile.

Most of us roll our eyes without a second thought, as it's just second nature, but Gemma Cairns had a different experience entirely: every time she moved her eyes, she heard a loud whooshing sound.