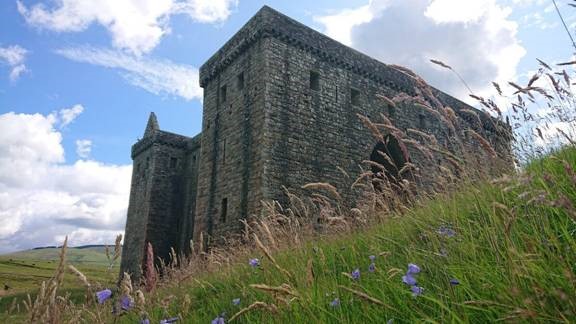 This castle resides in a valley known for immense bloodshed during the Middle Ages according to atlasobscura.com.

Hermitage Castle lies on the border region between England and Scotland. The desolate beauty of this area hides a turbulent and bloody history. For centuries, notably during the late Middle Ages, the English border with Scotland was a lawless and dangerous land fought over for both religious and political reasons. Settlements were scarce and many homes were fortified to protect them from frequent border raids.

Situated deep in the Liddesdale valley, the site of Hermitage castle dates back as far as the mid-13th-century. Records indicate that Edward I, King of England spent Ł20 on repairs to the castle during his wars with Scotland. The present castle was constructed by Sir Hugh de Dacre in 1360 after capturing it in 1341. Its fortress-like appearance was the result of further strengthening by the next owner William Douglas, 1st Earl of Douglas, a powerful Scottish nobleman. Douglas recognized the threats posed to Hermitage by the invention of gunpowder, so gun holes were installed and the defensive walls were strengthened. Constant instability and wars between England and Scotland meant the castle changed hands many times until 1492 when it was seized by the Earls of Bothwell.

In the Autumn of 1566, an event took place that would cement Hermitage Castle’s place in British history. Mary Queen of Scots had returned to her native country from France in 1561, with the hope of gaining support for her claim to the English throne. Mary’s future husband, James Hepburn, 4th Earl of Bothwell, had been injured during a battle with border reivers. These were lawless brigands who often crossed both sides of the border to steal cattle and attack homes.

A skirmish with a member of the notorious Elliot family had injured Bothwell three times, “ane in the bodie, ane in the head and ane in the hand.” Mary had been staying at Jedburgh, a large town further north beyond the Scottish border. On October 15th, after hearing of Hepburn’s injuries, Mary rode 25 miles over the rough, dangerous countryside to Hermitage castle where she visited Hepburn. She had given birth around two weeks before her brave journey. She assumed Hepburn would die from his wounds. Hepburn survived and the two were later married. Mary’s visit to Hermitage would later be used by her enemies to discredit her and as evidence that she was plotting to take the throne from her cousin Elizabeth I.

On her ride back to Scotland from Hermitage, it’s believed Mary fell from her horse, losing her watch in a nearby bog. In 1817, a French watch was found after being unearthed by a mole in a spot known as the queen’s mire. This is close to the route Mary would have taken back to Jedburgh. The watch can be seen on display at the Mary Queen of Scots House.

In 1603, the Union of the Crowns between England and Scotland after the accession of James I meant Hermitage castle was no longer a strategic asset. It was abandoned and gradually fell into a state of disrepair for 200 years.

The Victorian obsession with Gothic designs revived the fortunes of Hermitage. It became a brooding romantic ruin after Sir Walter Scott sketched the castle in the 1800s. His association with the castle helped bring it back to public attention and repairs were made to the walls in the 1830s.

Many of the internal floors of the castle have vanished, but the interior spaces such as the Douglas and prison towers can still be viewed from within.

A small chapel nearby which predates the castle can also be visited. The roof has vanished, but the arched windows looking toward Hermitage can be seen.

As of August 2020:Access inside Hermitage is not permitted until Spring 2021, however, the area around the castle and chapel is in open countryside and not restricted.

Hermitage Castle is owned and cared for by Historic Environment Scotland and is open between April and October.