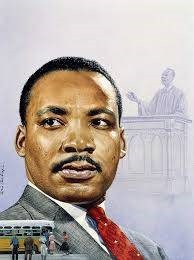 We will never forget Dr. Martin Luther King Jr.'s trailblazing activism and soaring vision for a just America says this article from biography.com. After being assassinated on April 4, 1968, we are left with the eloquence of his words that continue to guide us forward as we strive to become a more perfect union.

1_Martin Luther King, Jr. delivers a speech to a crowd of approximately 7,000 people on May 17, 1967 at UC Berkeley's Sproul Plaza in Berkeley, California. (Photo by Michael Ochs Archives:Getty Images)

"Intelligence plus character — that is the goal of true education."

—“The Purpose of Education” from Morehouse College student newspaper, The Maroon Tiger, 1947

“If we are not careful, our colleges will produce a group of close-minded, unscientific, illogical propagandists, consumed with immoral acts. Be careful, 'brethren!' Be careful, teachers!”

—“The Purpose of Education” from Morehouse College student newspaper, The Maroon Tiger, 1947

"True peace is not merely the absence of tension; it is the presence of justice."

“We know through painful experience that freedom is never voluntarily given by the oppressor, it must be demanded by the oppressed.”

"Injustice anywhere is a threat to justice everywhere. We are caught in an inescapable network of mutuality, tied in a single garment of destiny. Whatever affects one directly, affects all indirectly."

"Out of the mountain of despair, a stone of hope."

“We have also come to this hallowed spot to remind America of the fierce urgency of Now. This is no time to engage in the luxury of cooling off or to take the tranquilizing drug of gradualism. Now is the time to make real the promises of democracy.”

"I believe that unarmed truth and unconditional love will have the final word in reality. This is why right, temporarily defeated, is stronger than evil triumphant."

“The time is always right to do what is right.”

“The contemporary tendency in our society is to base our distribution on scarcity, which has vanished, and to compress our abundance into the overfed mouths of the middle and upper classes until they gag with superfluity. If democracy is to have breadth of meaning, it is necessary to adjust this inequity. It is not only moral, but it is also intelligent. We are wasting and degrading human life by clinging to archaic thinking.”

—Speech before a group of students at Barratt Junior High School in Philadelphia, October 26, 1967

“For when people get caught up with that which is right and they are willing to sacrifice for it, there is no stopping point short of victory.”

"We've got some difficult days ahead. But it really doesn't matter with me now because I've been to the mountaintop... I've looked over and I've seen the promised land. I may not get there with you. But I want you to know tonight that we as a people will get to the promised land."