Happy Festivus... for the Rest of Us! 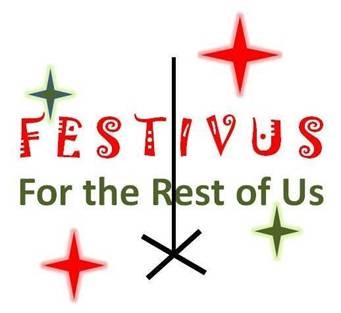 Festivus is a secular holiday, normally celebrated on December 23rd. It is mainly meant as an alternative to the pressures and commercializtion of the Christmas season. However, it has also become a day to celebrate the ever-lasting comedy of the 1990s television show Seinfeld.

Festivus was a holiday featured in the Season 9 Seinfeld episode "The Strike", which first aired on December 18, 1997. Since then, many people have been inspired by this zany, offbeat Seinfeld holiday and now celebrate Festivus as any other holiday.

According to the Seinfeld model, Festivus is celebrated on December 23rd. However many people celebrate it other times in December and even at other times throughout the year.

The usual holiday tradition of a tree is manifested in an unadorned aluminum pole, which is in direct contrast to normal holiday materialism. Those attending Festivus may also participate in the "Airing of Grievances" which is an opportunity to tell others how they have disappointed you in the past year, followed by a Festivus dinner, and then completed by the "Feats of Strength" where the head of the household must be pinned. All of these traditions are based upon the events in the Seinfeld episode, Strangely enough, our Festivus traditions also have roots that pre-date Seinfeld, as it began in the household of Dan O'Keefe, a television writer who is credited for writing the Seinfeld episode.

Now 100% Tinsel Free! A humorous guide to the wackiest holiday introduced to modern society. Festivus! The Book is an up-to-date complete reference for anyone who celebrates Festivus or plans to join the fun. Learn all about the traditions of a Seinfeld-based Festivus and witness the nuances of the original Festivus, as celebrated by the O'Keefe family. See first-hand how Festivus is celebrated by others and receive plenty of advice and tips to aid in your own Festivus party plans. What foods should be prepared? Is meatloaf preferred? Should you organize a wrestling match with your father? Are you too feeble for wrestling? What about arm wrestling or even thumb wrestling? How should you Air your Grievances? Maybe this is an opportunity to complain about Grandma's clicking dentures.

The Seinfeldian origins of the Festivus traditions can be dated back to the 9th season episode titled "The Strike". In this episode Frank Costanza expresses a concern over the increased commercialism and consumerism that tends to saturate the December holiday season.

In this episode, Frank Costanza tells the story of a routine outing to secure a Christmas gift for his son George where he came to the realization that there should be a new holiday:

In the episode, Kramer becomes interested in resurrecting the holiday after hearing about the plight of his friend—Frank Costanza's son—George (played by Jason Alexander).

Meanwhile George uses Festivus, a holiday he once hated in his youth, as a excuse to his boss Mr. Kruger after he had been confronted for handing out cards suggesting a donation had been made to a fake charity called The Human Fund (with the slogan "Money For People"). George defended himself saying that he feared persecution for his beliefs. Attempting to call his bluff, Kruger insisted that he accompany George to his home and see Festivus in action.

Kramer, who was also invited to the celebration, goes on strike from his bagel vendor job, when his manager tells him he can't get time off for "Festivus." Kramer is then seen on the street with a sign which reads "Festivus yes! Bagels no!"

Main Elements of a Seinfeld Festivus

A Festivus for the rest of us!

The Festivus episode of Seinfeld ("The Strike") reveals how the Festivus celebration includes four main components:

1 The Festivus Pole: The Costanzas' tradition begins with an unadorned aluminum pole, which Frank praises for its "very high strength-to-weight ratio." The pole was chosen in opposition to the of highly decorated, commercialized Christmas trees, because it is very low-maintenance, and most impotantly because the holiday's patron, Frank Costanza, finds "tinsel distracting."

2 The Airing of Grievances: At the beginning of the Festivus dinner, each participant tells friends and family all the times they have disappointed him or her the past year. As quoted by Frank Costanza: "I've got a lot of problems with you people, and now you're going to hear about it!"

3 Festivus dinner: In "The Strike," a celebratory dinner is shown on the evening of Festivus prior to the Feats of Strength. In the episode the meal appeared to be meat loaf on a bed of lettuce. No alcohol was served, but George Costanza's boss, Mr. Kruger, drank from a flask.

Although it is not an official element of the holiday or its celebration, the phenomenon of the Festivus Miracle is mentioned twice in the original episode. An obvious send-up to the phrase "Christmas Miracle", both manifestations of Seinfeld's "Festivus Miracle" were caused by Kramer. In today's society the use of the term "Festivus Miracle" has become far more mainstream.

The idea of Festivus originally came to Seinfeld writer Dan O'Keefe from a tradition started by his own father, Daniel O'Keefe. The elder O'Keefe had unilaterally invented Festivus, which had a vague origin in 1966 on the occasion of Daniel's first date with his soon to be fiancée Deborah. As the years went by, he shared the weird facets of his unique holiday with his three sons. Later, his eldest son Dan, a television script-writer, shared it with the world by including "Festivus" in a 1997 episode of Seinfeld. (Read More)

"The Human Fund" is a fake charity used by George Costanza. Instead of buying Christmas gifts for his coworkers, he gave a card that stated that a donation had been made to a charity called "The Human Fund". The slogan of the Human Fund was "Money For People". It was such a good scam that George's boss, Mr. Kruger gave George a company check for $20,000 to "The Human Fund". Later, the accounting department informs Kruger the charity doesn't exist, causing a chain of events that sees George inviting Kruger to his father's Festivus celebration.