The Three Fates in Modern Times 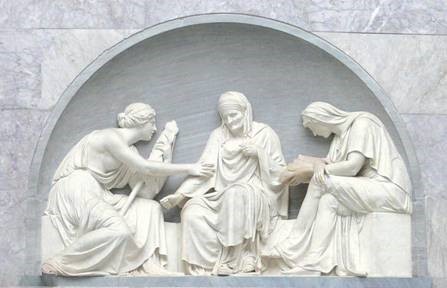 Everyone needs content for their RPG campaigns: adventure hooks, puzzles, NPCs, political machinations, combat encounters, and adventure sites according to moltonsulferblog.com. That’s what this site provides! RPG content is drawn from real-life fact and folklore, then advice is given on how to adapt it to your fictional campaign. Content that is grounded in reality (however fantastical) is richer and more vibrant, and your players will appreciate the difference.

In Greek mythology, the Three Fates are a triad of goddesses who dictate human destiny. Weirdly, they make great recurring villains in RPGs (Role Playing Games)!

Classically, the three fates are depicted as three women of three different ages: maiden, mother, and crone (a common motif). Together, they weave the thread of each mortal’s destiny. The first, Clotho, spins the thread. The second, Lachesis, measures it. The third, Atropos, cuts it. When the thread of a mortal’s life comes to an end, he will die. The Fates are independent of the other gods. In the Iliad, even Zeus must defer to their decisions. They are clearly not to be trifled with.

Because the Three Fates exist outside the normal hierarchy of the gods, they’re easy to drop into any setting with a pantheon of gods. Don’t feel beholden to doing the Three Fates as three fates. Even in ancient Greece, there were numerous interpretations of the goddess of fate. In the Odyssey, Fate is depicted as a single goddess accompanied by nameless spinners. Sometimes the Fates were ugly old women. Sometimes, Clotho was young and beautiful, Lachesis mature, and Atropos aged and severe. One of my favorite versions conflates the Fates with the Graeae, three aged witches who share a single eye and a single tooth, which they must pass between them. In some stories, the Fates appear after a child is born to dictate his destiny. In other stories, they don’t.

You can make a great comparison with the Batman universe. Jack Nicholson, Heath Ledger, and Mark Hamill all play the Joker as a distinctly different character. Yet we have no difficulty identifying all of them as the Joker, and we don’t see any contradiction. In much the same way, the Greeks had a lot of conflicting stories about their gods, but they didn’t see that as a problem.

The point is, the Greeks didn’t agree on what the Fates looked like, or how many there were. If you want to change the Fates to better fit your campaign setting, you should feel empowered to do so.

What makes the Three Fates so fun in a gaming context is their potential as recurring villains for a particularly kind of gaming group. You remember the kind of group we all played in when we were teenagers? When we deliberately played our characters as unpredictable, zany, or unintentionally psychotic? RPGs were an opportunity to cut loose, violate social mores, and not suffer the consequences. That’s not limited to childhood. Most of my campaigns are ‘serious’, but I play in a monthly D&D game that still has that vibe.

The Three Fates are perfect recurring villains for that kind of party. These mischievous PCs are agents of chaos, so who better to oppose them than the embodiments of destiny? Every few sessions, the Three Fates send aspects, avatars, or minor manifestations of themselves to oppose the PCs’ plans, and the party can have a good time overcoming this obstacle. Using the Three Fates as villains acknowledges the party’s actions but doesn’t penalize them. It lets you flag in-world that your PCs are effectively agents of chaos (nobody else has the Three Fates chasing after them), but it doesn’t stop the fun by throwing the PCs in jail or killing them.

Lachesis, shown sometimes with a book. In other depictions, she measures the string by eye or holds a measuring rod.

Using the Three Fates as villains also has this wonderful symbolic nature to it. It’s ‘meta’, if you want to be hipper than I am. In most systems, the only characters with free will are the PCs. Anything the PCs don’t affect happens according to the whims of an all-powerful force (the GM). If you add the goddesses of destiny to your setting, the PCs are the only beings they can’t control. This is particularly true of unpredictable parties that rampage across the countryside, spreading chaos as they go. Small wonder the Fates are aghast at these beetles, gnawing holes in their perfect tapestry. The Fates don’t even have to be the primary villains. You can keep the PCs focused on the Big Bad Evil Guy, but every so often, have the Fates drop in to oppose the only characters in the story with agency.

Perhaps the Three Fates send avatars to oppose the PCs’ schemes. These minor incarnations, which can be fought and beaten by the party, may recruit henchmen to further their schemes. They may promise to change the fates of NPCs in exchange for service. Are the Fates true to their word? Is the promise of fate always certain? Or are they duplicitous, unwilling to change their perfect tapestry even for their loyalest pawns?

Though judgmental Lachesis actually measures out the moment of a mortal’s death, it is Atropos and her dread shears that have, historically, most vividly captured the imagination. There is even a depiction that sits menacingly outside the United States Supreme Court.

How you stat up your Avatars of the Fates for combat depends on your system, of course. Here’s a few options.