Construction Workers Renovating The Lincoln Memorial Uncover A Secret Beneath It 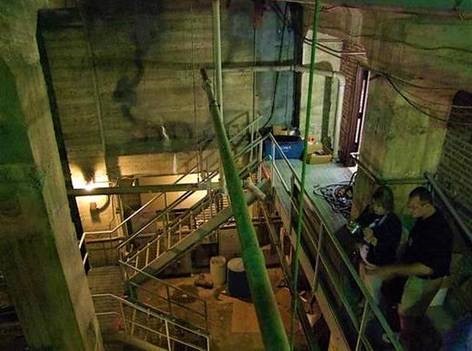 In the 1970s, when the American government was preparing for the Bicentennial, officials discovered something totally wondrous at Lincoln Memorial according to honesttopaws.com. It turned out that Honest Abe was sitting atop a massive secret — literally. If you’ve ever set foot on the Tennessee pink marble floors and stared up at the stoic expression of America’s 16th president, you were standing right above a decades-old mystery.

A construction crew working at the Lincoln Memorial back in 1975 was tasked with renovating the bathrooms. However, not long into their project, they noticed something strange about the structure’s foundation that no one was prepared for.

When workers took a closer look at the foundation, they discovered a massive room beneath the chamber housing Lincoln in his chair. As anybody else would do after discovering a major historical secret, the construction crew quickly told their friends.

Growths In The Cave

A few of those buddies were members of the National Speleological Society, who explored the giant room with awe. Stalactites and stalagmites formed during the years that space was neglected; they viewed it as sort of a manmade cave.

The room was massive: 43,800-square-feet to be exact. The more they poked around, the crazier and eerier the Lincoln Memorial basement revealed itself to be. Besides the rats, insects, and general spookiness, its mere existence sort of creeped everyone out.

How was it possible, that one of the most iconic monuments in America, with over 7 million visitors file through its chambers each year, kept its gigantic basement a secret? Surely, the room had once served a purpose.

Construction for the Lincoln Memorial kicked off in 1914. It took 40 years for the Army Corps of Engineers just to create the shoreline that serves as the attraction's backdrop.

The project necessitated that they first dig 40 feet down in the earth. In order to support the rest of the structure, they had to install a series of concrete pillars. When they were finished, it looked like a cathedral all on its own.

But after the crew proceeded with the rest of the 19-foot statue and the 145 steps leading up to it, the underground chamber just slipped from everyone’s minds, since it was no longer needed.

Once the National Parks Service got wind of the Lincoln Monument's killer basement, they had to show it off. Without much preparation, the derelict space was opened to the public, and tours of amazed visitors shuffled through its cavernous passages.

If you visited the memorial between the mid '70s and late '80s, you might have seen the big old basement for yourself. Officially, this space is called the undercroft, but it's still relatively unknown to the general American public.

Knowing that people were allowed to traipse through this elusive passageways for a while, why did they eventually shut it down? Well, it wasn’t exactly safe. During one tour, someone spotted what looked like asbestos in the basement.

In 1989, the undercroft was shuttered to the public. The National Parks Service needed to take care of the asbestos situation, and probably realized that the space was generally unfit for tours. Still, it wasn't as forgotten as it once was.

Over the years, select lucky adventure seekers have glimpsed the insides of the Lincoln Memorial undercroft, witnessing its most special feature — graffiti. Many of the columns in the basement are covered in funny little illustrations.

Steven Schorr, the president of DJS Associates, — a forensic consulting firm that took scans all over The National Mall and Lincoln Memorial — said, “The builders actually drew cartoons and they have them covered in Plexiglas.”

Drawing silly pictures on the pillars of a presidential memorial must have felt like the most rebellious act on the construction site for those 1914 laborers. Nearly a century after its completion, though, those cartoons are becoming the focus of the display.

Plans For The Undercroft

Billionaire philanthropist David Rubenstein has invested a staggering $18.5 billion into a project to modernize the Lincoln Memorial, including the undercroft space, allowing more Americans to glimpse that forgotten part of history.

The project marks the largest renovation the memorial's had since it first debuted in 1922. For Rubenstein, he views his ability to make this contribution to the Great Emancipator's monument as a tremendous honor.

The plan is to reopen the undercroft to the public for the Lincoln Memorial’s centennial in 2022 if everything goes according to schedule. So in the next few years, you might be able to walk among the storied columns for yourself!

For those planning to visit the Lincoln Memorial anytime soon, sadly, the undercroft remains off limits. Though, you can reportedly see the coordinates that mark the entryway into the chamber. If you want to impress any employees, ask about the basement.

Turn Of The Century

Parks services employees had no clue that there was a hidden cathedral underneath the Lincoln Memorial, which is actually quite common for historic building projects from the turn of the century.