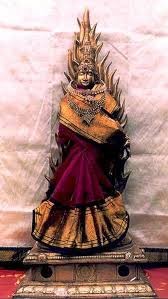 There is an amazing pantheon of gods and goddesses, spirits and positive entities in the Indian sub-continent.  One of these is Joyti of the Light.  Here we present a learned paper by Dr. Alagappa Alagappan presented at the First International Conference Seminar on Skanda-Murukan.

Jyoti is a member of the Shiva family. She is a part of the eternal Godhead. When Shiva (static consciousness) united with Shakti (kinetic energy) Ganesa (sound) and Skanda (light) were born. Jyoti (light) was also born out of this union. She represents the female principle of light since she is active in creation, while Skanda represents the male principle of light. She is predominantly made of light like Skanda and isas a sister to Skanda.

The human body is a temple. The breath through the right and left nostrils constitutes Shiva and Shakti. Lord Ganesa resides at the base of the spine from which Jyoti, or the Kundalini force, rises through the five cakras(Muladhara, Manipuraka, Swadhistana, Anahata, Visudhi, and Ajnacakra.), or the six battle houses of Lord Skanda. When the Kundalini Shakti travels up the spine and reaches the Ajna cakra in the forehead, the merger with Shakti residing there represents the confluence of the power of the Mother, being given to and becoming part of the son. The battle between the higher self and the lower self rages in the six cakras, or the battle houses of Lord Skanda. After winning the battles, Jyoti reaches her mother in the sixth battle house of Skanda, known as Ajna Cakra.

Skanda Purana tells us that Skanda was born after intense tapas of six sparks from Shiva's forehead. That is why Skanda is considered by many to be not only the quintessence of, but an improved version of Shiva. On the other hand Jyoti was born of one spark from the mother's forehead, from her Adho face. When the divine child Skanda was entrusted with the mission to quell Surapadman, who embodied the demonic forces of the day, Mother fashioned out of herself a Vel and presented [it] to Skanda the Child as an invisible weapon. The revelation now is that it is not an Instrument but a Deity in its own right.

Up till recently, the antecedents of Jyoti has not been too clear. In August 1978, the knowledge that it is none other than the Vel in the hands of Lord Skanda was imparted to the Author by His Holiness Śrī La Śrī Pandrimalai Swamigal. Jyoti in her arupa formless aspect is worshipped in all temples where Skanda is worshipped. Jyoti from. now on also desires to be worshipped in the rupa form.

The "Vel" is Jyoti, the younger sister of Lord Skanda. She is Shakti Vel not only because Shakti gave it to Skanda but also because it is an energised weapon. The Vel has all the energy and the dynamism of Shakti. It has also been praised as Ratna Vel since she sparks like the precious stone Ratna. She is called Jnana Vel as she removes darkness and ignorance and provides the Jnana, or true wisdom. She has blazoned the trail of jnana travelled by sages, siddhas and those who are spiritually advanced. Since jnana always wins, she is called vetri, or the victorious Vel. Jyoti assists Lord Skanda in helping devotees to win their internal battles and to achieve spiritual progress leading to the liberation of their souls and merger with Godhead. The Vel is arupa, or the formless. Since it is made of fire it cannot be broken down or defeated.

Jyoti has always been inseparable from Lord Skanda. There is no temple for Skanda without the worship of Jyoti in the form of Vel. Jyoti is also known as Saravanabavayai to indicate that she is always intertwined with Saravana or Skanda, and acts for him. In her formless arupa form of the Vel, she has a head that is intelligence and consciousness and a slender rod or stem enabling her to move with speed. Jyoti takes after her mother in the form of Durga to punish the evil forces as well as to build and protect a just world order where love and brotherhood are developed.

Jyoti presides herself over one of the six houses Lord Skanda namely Palamutircolai which corresponds to the Ajna Cakra. This house is situated near Madurai . Here Jyoti is also worshipped as Rakkayi particularly on the full moon days. Rakkayi's form in rural areas is mainly a head with a face of fire, again reconfirming the form of a Vel with a head and slender form.

The close association of Vel with her mother is the subject of Shodasam, a major devotional composition by the sage Agastya. For each day of the waxing and waning of moon he discovers and describes the role of the mother Manonmani (can be seen along with Shiva in the form of Cokkanatar in one of the principal sanctum in Madurai Meenakshi temple), consort of Shiva in the form of Sadasiva, and daughter Jyoti who are together in the Ajna cakra in our foreheads. The sage also recounts that how Jyoti was born of the Pranava pillar of ‘ OM '. He calls her the young damsel who lives in the centre of the eyebrows. All life is Jyoti . She pervades in all the galaxies and is a growing flame. She is totality and Parabrahman and is in her fullness on paurnami full moon days.

A great Jyoti centre is Tiruvannamalai, a town that exemplifies the fire element of Shiva. At this great Shiva centre Jyoti is worshipped as she is made of fire, and there is a Jyoti festival every year during the month of Kartikai of the Tamil calendar. Jyoti is called here Arul Perum Jyoti, or the graceful and great Jyoti.

Shiva as Nataraja, in his cosmic dance carries Jyoti in his left hand as fire. Jyoti lives with Nataraja in the golden stage, or what is called Ponnambalm. All creation is from Jyoti or fire. Jyoti becomes active from then on.

Jyoti is also a representation or embodiment of divine light and love, accessible to us on the Earth plane. Jyoti governs our words. Jyoti is the burning light in the lamps in all temples. We invite these lamps to come into our heats. Jyoti is said to be covered by seven screens. It is only after all the screens are removed she appears in all her radiance. A great exponent of Jyoti who merged with her in recent times was Ramalinga Swamigal.

In addition Jyoti in her association with her mother in the form of Kanya Kumari has been the protector, custodian and teacher of the great sages and siddhas. She has been worshipped as Jwalai Kumari and in the North India as Jwalamukhi for centuries. She is also called Jnanambal or Balambika meaning goddess of knowledge or child goddess. Siddha literature abounds with poems lauding the vibrant Jyoti.

Jyoti is the female principle of Shanmukha and is known as Shanmukhi. She is also addressed as Karttikeyi and Kumari.

We have been fortunate to receive, through Miss Hilda Charlton from Lord Skanda in 1982, mantras which are to said together and are unique to the Maha Vallabha Ganapati Temple at Flushing , New York .

In his instructions, Skanda explained that these mantras, when said in devotion, harmonise the Shiva Shakti, or Ying-Yang energy within each person.

The Vel, Skanda says ‘is symbolic of the spine, at the top of which is the head, inside of which flows Jyoti-Light, or the arisen Kundalini.' Those who wants God realisation should begin at the bottom of the spine, coccyx.

‘I am the Strength and Force who guides the kundalini from the bottom to the top of the spine'.

When the kundalini rose and finally burst forth, the Goddess Jyoti appeared.

First see the Jyoti as the face in the Vel.Then the whole Goddess explodes as the power rises, and She will stand in Her glory. Bliss is felt, the blessing then overflows to the earth, helping to raise the consciousness of the humanity. All this happens within, but is symbolised without as the Vel of Skanda.

"I am the Leader, the General, who guides these forces up the spine. You, who yearn for liberation, look to me, follow my words, and victory will be yours. Turn away from the orders of the general during battle, and defeat is the result. When there is war, the army must listen to general."

Jyoti has been dormant for aeons and the time has come for her revival. In the new Shakti Age, She will be destroying evil in the Kali Yuga. Two more mantras describing Her bring out this fact.

The first mantra calls Her the creator and the next one finds in her radiance and luminosity the attributes of bountifulness of Maha Lakshmi, Goddess of material and spiritual wealth, Bhuvaneswari, representing all the revolving planets and worlds: Durga, the ruler and the eternal mother. Jyoti is described by Agastya as graceful Jyoti, Ananda (blissful or supremely happy) Jyoti, and Arupa (formless) Jyoti.

Worship of Jyoti can be done internally through the practice of Kundalini Yoga.

As the great Tirumoolar has said:

"North, South men wander about seeking him
East and West celestials go about looking for him
But fix the divine mantra ( OM ) to muladhara and rouse (kundalini) fire upward to stream. There shall you as radiant light be."

Jyoti is to be worshipped on the day of the full moon, especially in the evening and at night time.

Jyoti in her form as "Saravanabhavayai" or "Vel" is to be worshipped with her brother on all days honouring Him. Thus Kartikai days are special. The most important day for worship of Jyoti or Saravanabhavayai is the day of her birth when the Universal Mother fashioned the spark born in her forehead in to "Vel" and gave it to her young son on the eve of the battle with Surapadman. This is the day of Visahka Nakshatra in the month of May.

The Hindu Temple Society of North America (Maha Vallabha Ganapati Devasthanam), conscious of its role and responsibility to preserve, spread and foster Hinduism in Lands beyond the borders of India unanimously decided that the first four vigrahas of Jyoti in the rupa form be made first in New York and presented to other places if they erect shrines to install them. The Society thus took the initial steps towards this goal of launching the Jyoti movement.

The first of these vigrahas was installed at Houston and consecrated by Mr. Anantharamaseshan on 27th June 1983. Next to the sanctum of Lord Skanda at the Ganesh temple in Flushing , New York , a small stone temple is erected for Jyoti and large numbers of devotees are worshipping this beautiful form.

A major Jyoti shrine has been erected in the Venkateswara Temple at Las Vergennes Canyon Road , in Calabasas , California . It is believed that Jyoti has made her abode in California since she was active in the same region. In the bygone age sage Kapila was engaged in tapas worshipping Jyoti in his forehead. Sage Kapila opened his third eye upon the 60,000 sons of King Sagara who tormented the sage. By the outpouring of flames they were destroyed to ashes. The local inhabitants prayed the fire and it got submerged in to the Pacific Ocean . This appears to come back and take abode in California . Another vigraha for Jyoti is to be installed at the Murugan Temple at Washington , DC .

The first major temple for Jyoti to be built in India is at the Arupadai Veedu Complex at Madras . The Muladhara Ganapati in the center, all the Arupadai Veedu (six cakras ) are situated around this Ganapati. The sixth house will house the Jyoti-Vel. It will also streamline the method of worship. There will be a meditation center