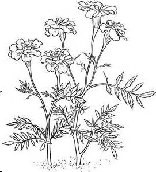 From a wide variety of sources we discover that the October birth flowers are the marigold, the cosmos and the calendula.

Marigolds are often given as a sign of warm or fierce undying love or as a way of saying that you’re content to be with the recipient.

There are about 50 species of marigolds that range in height from six inches to five feet tall.

They were first discovered in the 16th century by the Portuguese in Central America who then introduced the flower to parts of Europe and India .

In Aztec culture the marigold was believed to have magical religious and medicinal properties, which date back to 1552 when herbal records show they were used to cure hiccups and anyone injured from being struck by lightning.

A magical use of the flower was when it was used to protect sailors who carried it for safe passage over rivers and other bodies of water.

In ancient South Asia marigolds were popular and held great value. The bright golden color of the flower resembled that of honorable people known as Ayra. The flower was so valuable that it was used as a decoration at various places of importance to the people of that day. As a result, it was common to find them lining ceremonial rooms and pavilions.

Early Spanish explorers were said to have taken marigold seeds from the Aztecs in Spain , where they were grown in monastery gardens. From there marigold seed went to France and Africa .

In Mexico marigolds are also used as a decorative flower and are popular during All Saints Day and All Souls Day. They are also used in Hindu religious ceremonies.

Marigolds were also made into garlands to decorate during harvest festivals and other items similar in color, such as corn and peppers, were used in the ceremonial decorations.

The marigold is an everyday sight in modern day India where they continue to be used as a decorative plant. They are used in various ceremonies from weddings to funerals and are used as offerings to gods, dried into a powder they are rubbed onto the exterior of village homes and oils extracted from the flower are used for the creation of numerous perfumes.

Marigolds did not arrive in North America until after the Revolutionary War. In the early 1900’s both the sweet pea and marigold were gaining popularity in the United States . It was in the 1920’s when breeding led to the introduction of hundreds of new varieties. Some of the new developed marigolds introduced at the time included the white marigold, the odorless marigold as well as hybrids and triploids.

Marigolds are still commonly used as a medicinal herb. The flower is said to remedy the swelling of a wasp or bee sting when rubbed on the affected area. A lotion created from the flower is considered useful for sprains and wounds and inflamed eyes are said to benefit from water distilled from marigolds.

Other medicinal qualities come from eating the leaves of the plant in a salad. They are believed to be useful in scrofula of children and the plant’s acridness has made it a choice for the treatment of warts.

The word marigold is used to describe plants with golden yellow blossoms and the Calendula (marigold) symbolizes sorrow or sympathy, which explains the hidden message “My Thoughts Are With You”, associated with this flower.

Cosmos are a symbol of order, peace, and serenity. These semi-tall annuals are often planted along borders.

Cosmos will attract birds, bees, and butterflies to your garden.

The plant can grow up to 2m tall and has simple leaves and petals. The flower colors vary between the different species. The plants are often used as decoration in gardens and around a home.

Cosmos is the Greek word for harmony or ordered universe. They are a pest free plant which helps keep bugs at a minimum in gardens and green houses, and grow very well in dry, hot climates like Texas . If planted in rich, fertile soil, tall plants will grow. Some species of the Cosmos requires constant sunlight through out the day and should not be planted in an area where it will have shade for a big part of the day. Because it is one of the easiest plants to grow it can be planted at various time including the spring for summer blooming or mid-summer for early fall blooming.

Fun and interesting fact: The Cosmos got its name from the Spanish priests grew the Cosmos in their gardens in Mexico . The evenly placed petals led them to christen the flower with the name it is now known by.

The genus name Calendula is a modern Latin diminutive of calendae, meaning "little calendar", "little clock" or possibly "little weather-glass". The common name "marigold" refers to the Virgin Mary. The most commonly cultivated and used member of the genus is the pot marigold (Calendulaofficinalis).

The colors of the calendula flower are yellow or orange, which represent the path of the sun throughout an autumn day. It is thought that the flower holds all of the sunlight of autumn. Those with an autumn birthday are said to be warm, friendly and easy going.

The symbolic meaning of the calendula flower is grief, despair and sorrow.

Whether displaying bright orange or sunny yellow flowers, calendula—also called pot marigold—is one of the most essential parts of your garden medicine chest. The aromatic heads of these spring flowers can be collected and made into oils and salves to help heal skin injuries of all kinds. Make sure you grow only C. officinalis and not just any of the many marigolds or ornamental varieties that are available.

Calendula can grow to almost two feet tall, and the flowers tend to open with sunny, dry weather and close in cold or moist conditions. They enjoy full sun—or even partial shade in hot summer regions—and average soil, and have moderate water needs. If flower production dwindles, you can cut back the plants to increase new flower production. Calendula will self-sow yearly in many gardens and don't mind crowding. Direct-sow the seeds in early spring or late fall, as they can withstand some frost.

Collect the flower heads on hot, sunny days for the highest resin content, and pick them regularly to prevent the plants from putting their energy into seed production. Once that happens, the rest of the flowers will be smaller. Choose flowers that are just opening in the morning before noon, and dry calendula quickly after you harvest it—check the center of the flower for dryness because molding in storage is a problem. Watch for reabsorption of moisture and keep it in complete darkness.

Use the entire flower head, not just the petals, in preparations for healing cuts, scrapes, burns, diaper rash, sores, ulcers, varicose veins, chapped skin and lips, and insect bites. Salves, oils, creams, and other preparations can be found in drugstores and natural food stores alike. Science shows that extracts of the flower heads have anti-inflammatory and antibacterial effects. And herbalists have long recommended tea infusions of calendula to help heal ulcers in the digestive tract, soothe gallbladder inflammation, and treat enlarged, sore lymph glands.

Use the freshly dried flower heads to make creams, salves, liniments, teas, tinctures, and oils, or add the flower heads directly to your bath to soothe irritated skin. For internal conditions, take one to three dropperfuls of tincture in a little water several times daily (though be sure to check with your healthcare professional first).

As with other members of the daisy family, some people are sensitive to calendulas because of the sesquiterpene compounds that the plants contain. If you tend to have allergic skin reactions or are sensitive to certain foods, start with a low dose of this herb and work up to a full dose if you don’t experience any reaction.