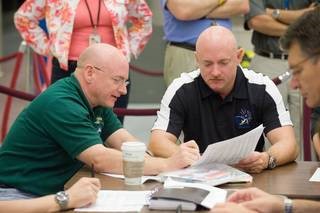 Back in the 1960s, brothers Scott and Mark Kelly shared two very important things: a nearly-identical genetic makeup and a desire to boldly go where no one had gone before. They had no idea that, a few decades later, they'd be the subjects of a history-making experiment in space that could help experts understand the effects of aging on our bodies.

By 1996, Scott and Mark Kelly had both become astronauts for NASA. This wasn’t only a once-in-a-lifetime opportunity for the twins, but for NASA: it’s not everyday that you see a pair of twins who are both capable of space travel.

“Early on in our astronaut career, my brother and I had kind of wondered about it — hey, I wonder if they’ll ever do an experiment with the two of us, being genetically nearly identical,” Scott Kelly explained. It took years, but in 2015, that’s exactly what happened.

With Mark as the “control” on Earth and Scott as the "experimental" on the International Space Station, the twins spent almost a whole year on different worlds. They had no idea how doing so would shed light on the effects of space travel on the human body.

Scott on the International Space Station

Life on the ISS followed a strict schedule. Scott carefully tracked when he ate, when he went to the bathroom, when he did blood tests, and so on. He was confined to the walls of the station, away from the sights, smells, and sounds of Earth.

Most of all, Scott’s days were spent doing the high-caliber, high-stakes work of an experienced astronaut — he wasn’t exactly on vacation. Throughout the year, both Scott and Mark dutifully collected body samples to send to NASA for monitoring.

When Scott and Mark finally reunited on Earth, it took months for Scott’s body to get used to gravity again. During this time, the results of the Twin Study were finally analyzed...and what scientists discovered about space and human genetics was astonishing.

As it turned out, Scott’s body went through things Mark’s body back on earth did not: On the ISS, fluids swelled around his upper body and head, his immune system worked overtime, and his metabolism was altered...and those were just the internal changes.

When Scott finally reunited with Mark, what Mark saw was different from the familiar face he’d known all his life. You see, what had changed the most in space wasn’t Scott’s body chemistry, but his genetic makeup. His DNA had been damaged.

According to Mike Snyder, a co-author of the Twins Study, “This is...probably the most in-depth study, certainly at the biochemical level, that’s ever been done in people in space.” It’s a good thing, too: Scott’s unusual genetic changes told a bizarre story.

While in space, there was Instability in Scott’s genome. This caused the protective structures at the ends of Scott’s chromosomes to get longer for a short period of time. However, they didn’t go back to normal as one might expect.

No "Fountain of Youth"

As Twin Study co-author Susan Bailey said, “I don’t think that [the elongation] can...be viewed as the fountain of youth and that people might expect to live longer because they’re in space.” In fact, NASA points to Scott’s shortened telomeres to prove otherwise.

The fact that Scott’s telomeres were only temporarily lengthened and are now permanently shorter than they were proves how space flight can actually put the body at risk for age-related conditions, like heart disease and cancer, earlier in life than before.

Are They Still Identical?

Of course, that leaves us with one question: Did Scott age in space as much as his genetic expression implies? When Scott and Mark were once again face to face, everyone wanted to see if the twins still looked identical...

Weirdly, it wasn’t Scott who looked different, but Mark. Despite being the control subject, it was Mark, who had lived normally on Earth, who had higher levels of DNA changes, probably because of his "carefree" life. Still, there were some bizarre physical changes in Scott.

Not only had Scott’s eye shape changed, but his body seemed to have aged a bit, too. His vision was weaker, he had a decrease in cognitive speed, and despite being the same age as Mark, he’s at a somewhat higher risk for heart disease.

You might think that these findings would transform space travel, but that’s not the case. There’s no way that NASA will ever have enough twin astronauts to study to turn their findings into anything more than interesting observations. Still, there may be hope yet.

The Twin Study proves that scientists can monitor an astronaut’s genetics from space. The study could even have “inaugurated the genomic era of space travel,” according to Professor Andrew Feinberg, which could lead the way to one long-anticipated achievement.

Scott and Mark’s participation in the Twin Study will help future scientists understand how the human body relates to space flight, and if it will ever be possible for humans to explore new worlds at all — worlds, as Feinberg suggests, like Mars.