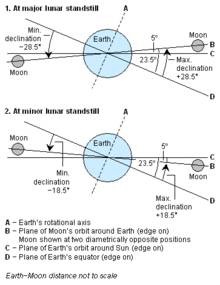 Image: Diagram of the relative positions during mayor and minor Lunar Standstill - wikipedia.com

A lunar standstill is the gradually varying range between the northern and the southern limits of the Moon's declination, or the lunistices, over the course of one-half a sidereal month (about two weeks), or 13.66 days according to wikipedia.org. (Declination is a celestial coordinate measured as the angle from the celestial equator, analogous to latitude.) One major, or one minor, lunar standstill occurs every 18.6 years due to the precessional cycle of the lunar nodes at that rate.

This time appears to have had special significance for the Bronze Age societies, who built the megalithic monuments in Britain and Ireland. It also has significance for some neopagan religions. Evidence also exists that alignments to the moonrise or moonset on the days of lunar standstills can be found in ancient sites of other ancient cultures, such as at Chimney Rock in Colorado and Hopewell Sites in Ohio.

The term lunar standstill was apparently first used by archeologist Alexander Thom in his 1971 book Megalithic Lunar Observatories. The term solstice, which derives from the Latin solstitium: sol- (sun) + -stitium (a stoppage), describes the similar extremes in the Sun's varying declination. Neither the Sun nor the Moon stands still, obviously; what stops, momentarily, is the change in declination. The word tropic, as in Tropic of Capricorn, comes from ancient Greek meaning "to turn", referring to how ascending (or descending) motion turns to descending (or ascending) motion at the solstice.

As Earth rotates on its axis, the stars in the night sky appear to follow circular paths around the celestial poles. (This daily cycle of apparent movement is called diurnal motion.) All the stars seem fixed on a celestial sphere surrounding the observer. In the same way that positions on Earth are measured using latitude and longitude, the apparent places of stars on this sphere are measured in right ascension (equivalent to longitude) and declination (equivalent to latitude). If viewed from a latitude of 50° N on Earth, any star with a declination of +50° would pass directly overhead (reaching the zenith at upper culmination) once every sidereal day (23 hours, 56 minutes, 4 seconds), whether visible at night or obscured in daylight.

Unlike the stars, the Sun and Moon do not have a fixed declination. Since Earth's rotational axis is tilted about 23.5° with respect to a line perpendicular to its orbital plane (the ecliptic), the Sun's declination ranges from +23.5° on the June solstice to ?23.5° on the December solstice, as Earth orbits the Sun once every tropical year. Therefore in June, in the Northern Hemisphere, the midday Sun is higher in the sky, and daytime then is longer than in December. In the Southern Hemisphere, the situation is reversed. This obliquity causes Earth's seasons.

The Moon's declination also changes, completing a cycle once every lunar nodal period: 27.212 days. Thus, lunar declination ranges from a positive value to a negative one in just under two weeks, and back. Consequently in under a month, the Moon's altitude at upper culmination (when it contacts the observer's meridian) can shift from higher in the sky to lower above the horizon, and back.

The Moon differs from most natural satellites around other planets in that it remains near the ecliptic (the plane of Earth's orbit around the Sun) instead of Earth's equatorial plane. The Moon's maximum and minimum declination vary because the plane of the Moon's orbit around Earth is inclined about 5.14° with respect to the ecliptic plane, and the spatial direction of the Moon's orbital inclination gradually changes over an 18.6-year cycle, alternately adding to or subtracting from the 23.5° tilt of Earth's axis.

Strictly speaking, the lunar standstill is a moving position in space relative to the direction of Earth's axis and to the rotation of the Moon's orbital nodes (lunar nodal precession) once every 18.6 years. The standstill position does not persist over the two weeks that the Moon takes to move from its maximum (positive) declination to its minimum (negative) declination, and it most likely will not exactly coincide with either extreme.

However, because the 18.6-year cycle of standstills is so much longer than the Moon's orbital period (about 27.3 days) that the change in the declination range over periods as short as half an orbit is very small. The period of the lunar nodes precessing in space is slightly shorter than the lunar standstill interval due to Earth's axial precession, altering Earth's axial tilt over a very long period relative to the direction of lunar nodal precession. Simply, the standstill cycle results from the combination of the two inclinations.

Apparent position of the Moon during standstill

The azimuth (horizontal direction) of moonrise and moonset varies according to the Moon's nodal period of 27.212 days, while the azimuth variation during each nodal period varies with the lunar standstill period (18.613 years).

For a latitude of 55° north or 55° south on Earth, the following table shows moonrise and moonset azimuths for the Moon's narrowest and widest arc paths across the sky. The azimuths are given in degrees from true north and apply when the horizon is unobstructed. Figures for a time midway between major and minor standstill are also given.

Azimuth of full Moon on horizon
(as viewed from 55° north)

Azimuth of full Moon on horizon
(as viewed from 55° south)

For observers at the middle latitudes (not too near the Equator or either pole), the Moon is highest in the sky in each period of 24 hours when it reaches the observer's meridian. During the month, these culmination altitudes vary so as to produce a greatest value and a least value. The following table shows these altitudes at different times in the lunar nodal period for an observer at 55° north or 55° south. The greatest and least culminations occur about two weeks apart.

Altitude at culmination
(as viewed from 55° north)

Altitude at culmination
(as viewed from 55° south)

The following table shows some occasions of a lunar standstill. The times given are for when the Moon's node passed the equinox—the Moon's greatest declination occurs within a few months of these times, depending on its detailed orbit. However, the phenomenon is observable for a year or so on either side of these dates.

A more detailed explanation is best considered in terms of the paths of the Sun and Moon on the celestial sphere, as shown in the first diagram. This shows the abstract sphere surrounding the Earth at the center. The Earth is oriented so that its axis is vertical.

The Sun is, by definition, always seen on the ecliptic (the Sun's apparent path across the sky) while Earth is tilted at an angle of e = 23.5° to the plane of that path and completes one orbit around the Sun in 365.25636 days, slightly longer than one year due to precession altering the direction of Earth's inclination.

The Moon's orbit around Earth (shown dotted) is inclined at an angle of i = 5.14° relative to the ecliptic. The Moon completes one orbit around the Earth in 27.32166 days. The two points at which Moon crosses the ecliptic are known as its orbital nodes, shown as "N1" and "N2" (ascending node and descending node, respectively), and the line connecting them is known as the line of nodes. Due to precession of the Moon's orbital inclination, these crossing points, the nodes and the positions of eclipses, gradually shift around the ecliptic in a period of 18.59992 years.

The maximum declinations of the Moon in 2005–06

However, an additional subtlety further complicates the picture. The Sun's gravitational attraction on the Moon pulls it toward the plane of the ecliptic, causing a slight wobble of about 9 arcmin within a 6-month period. In 2006, the effect of this was that, although the 18.6-year maximum occurred in June, the maximum declination of the Moon was not in June but in September, as shown in the third diagram.

Atmospheric refraction – the bending of the light from the Moon as it passes through the Earth's atmosphere – alters the observed declination of the Moon, more so at low elevation, where the atmosphere is thicker (deeper).

Not all the maxima are observable from all places in the world – the Moon may be below the horizon at a particular observing site during the maximum, and by the time it rises, it may have a lower declination than an observable maximum at some other date.


Note that all dates and times in this section, and in the table, are in UTC, all celestial positions are in topocentric apparent coordinates, including the effects of parallax and refraction, and the lunar phase is shown as the fraction of the Moon's disc which is illuminated.

However, these dates and times do not represent the maxima and minima for observers on the Earth's surface.

For example, after taking refraction and parallax into account, the observed maximum on 15 September in Sydney, Australia was several hours earlier, and then occurred in daylight. The table on the right shows the major standstills that were actually visible (i.e. not in full daylight, and with the Moon above the horizon) from both London, UK, or Sydney, Australia.