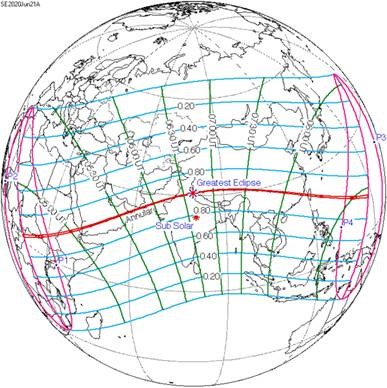 A rare 99% eclipsed Sun will be seen from Ethiopia, India, and Tibet according to travelleisure.com.

Today parts of the globe are being treated to the best "ring of fire" annular solar eclipse of the decade. On December 26, people in the Middle East, India, and Southeast Asia glimpsed the "Christmas Eclipse," seeing a glowing circle around the moon for a few minutes through solar eclipse glasses.

The same thing is happening today, this time across Africa, the Middle East, India, and China — and this is going to be the shortest and deepest annular solar eclipse of 2020.

What is a "ring of fire" annular solar eclipse?

It’s a special kind of partial solar eclipse. It occurs when a new moon is furthest away from Earth on its elliptical orbit — basically the opposite of a "supermoon" — so it doesn’t cover the sun’s disk completely. Solar eclipse glasses must be worn at all times to avoid the threat of blindness, so it can be a dangerous event if you’re not properly prepared.

Where and when is the "solstice ring of fire eclipse?"

Today's solar eclipse will take place on a narrow "path of annularity" across Africa and Asia. A "ring of fire" will be visible at sunrise in the Congo and the Democratic Republic of Congo, then as a higher-in-the-sky spectacle in South Sudan, Ethiopia, Eritrea, Yemen, Oman, Pakistan, India, Tibet, China, and Taiwan. Observers will see a ring around the sun for a maximum of about one minute. That may not sound like much, but that’s actually why it’s so exciting.

What can you expect to see during this "ring of fire" eclipse?

What makes this "ring of fire" solar eclipse so special is that the sun will be 99% obscured, so it’s almost a total solar eclipse. Unlike most annular solar eclipses, it’s expected to go pretty dark before the "ring of fire" is visible, and there may be odd animal behavior and some points of light around the moon called "Baily’s beads." It might even be possible to glimpse the sun’s outer atmosphere — the corona — a white-hot layer that is usually impossible to see. That’s why dedicated eclipse-chasers are traveling to Tibet for the briefest "ring of fire" that will last just 23 seconds. Others are headed just south of Muscat in Oman (where clear weather is likely) or to Lalibela in Ethiopia (famous for its rock-cut monolithic churches).

When is the next "ring of fire" eclipse?

For the first time since 2012, a "ring of fire" annular solar eclipse is coming to North America. On June 10, 2021 — a couple of weeks after the next "blood moon" total lunar eclipse — a "ring of fire" eclipse will be visible at sunrise from northern Ontario and northern Quebec. The best place to watch the eclipse to be will be in a small plane above the (likely) clouds over Polar Bear Provincial Park. Intrepid eclipse-chasers will get to see a 94% eclipsed sun at sunrise.

This eclipse will also be seen in Greenland, over the North Pole, and into far northeastern Russia. Here’s a map of exactly where it will be visible from.

When is the next total solar eclipse?

The next total solar eclipse is on December 14, 2020 in Chile and Argentina. The "path of totality" will bring 2 minutes, 9 seconds of daytime darkness to the Chilean Lake District, including Lake Villarrica and Pucón, an area famed for its lakes and hot springs. Totality will also strike remote Patagonia in Argentina, where favored viewing areas include the area north of Piedra del Águila in Neuquén Province and inland from Las Grutas on Argentina’s east coast.

How does a "ring of fire" eclipse compare to a total solar eclipse?