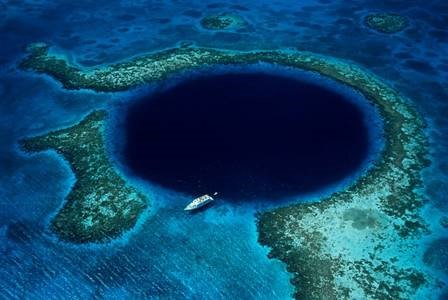 
Located some 40 miles off the coast of Belize City, the Great Blue Hole has marveled those who’ve skirted its crystal-blue waters for over the last half-century according to mentalflare.com. At over 1,000 feet across, this massive cavern was long considered the biggest of its kind.

The hole is at the center of the Lighthouse Reef, one of the many small atolls that make up the world’s second-largest coral reef system, the Belize Barrier Reef.

As such, the Great Blue Hole is protected as a World Heritage Site under the United Nations Educational, Scientific and Cultural Organization (UNESCO).

But although the hole itself has been known to researchers since the mid 20th century, it wasn’t until a famed marine explorer finally visited the site that anyone fully appreciated it.

When Jacques Cousteau visited the site in 1971, the world finally began to take notice of its magnificence. Using the mobile lab aboard his ship Calypso, Cousteau was the first to measure the depth of the hole — a remarkable 407 feet.

A 1991 expedition led by the Cambrian Foundation sought to confirm Cousteau’s original measurement, and to their surprise, they found that the French adventurer was nearly spot on.

Though the title of the world’s largest marine sinkhole now belongs to China’s Dragon Hole, the Great Blue Hole is still big enough to fit two Boeing 724 airplanes with room to spare.

Following Cousteau’s exploration, the site has since become a popular scuba spot among professional divers, with some citing it as one of the best in the world.

But despite all the attention that the Great Blue Hole has gained over the years, little was truly known about the massive cavern and what it contained… until now.

Fueled by his adventurous spirit and fervent support for marine conservation, English entrepreneur and Virgin Group founder Richard Branson sought to unveil the mysteries of the Great Blue Hole once and for all.

Yet even with years of adventures and discoveries to his credit, Branson needed the help of one important individual to truly make the expedition worthwhile.

That’s right: he enlisted the help of Fabien Cousteau, the grandson of the very same man that had put the Great Blue Hole on the map almost 50 years earlier. Together, the two explorers hoped to pick up right where Jacques had left off.

More specifically, the men wanted to use state-of-the-art 3D imaging technology to create a comprehensive map of the interior of the sinkhole. This would provide never-before-seen insight.

They were also looking to test the water quality and oxygen levels within the Great Blue Hole to get a sense of what kind of aquatic life could survive there.

Additionally, Branson and Cousteau were adamant about exploring what they believed to be an oxygen-depleted area at the base of the hole. Why the interest in this so-called dead zone?

Additionally, Branson and Cousteau were adamant about exploring what they believed to be an oxygen-depleted area at the base of the hole. Why the interest in this so-called dead zone?

“We’ve heard that in the Blue Hole there is an anoxic area [or dead zone] near the bottom,” said one of the expedition’s crew members. “This is really interesting because things don’t degrade in anoxic areas so we could find preserved life.”

But even as visions of this vast undersea adventure danced in their heads, the men still had one glaring issue to overcome before they could even think about venturing below the surface: how would they do it?

Being that most humans can’t dive more than 130 feet without being crushed by water pressure, scuba diving was completely out of the question. They needed to think outside the box.

Luckily, they found captain Erika Bergman. Aboard her high-tech STINGRAY 500, the team would be able to dive at depths of up to 500 feet while simultaneously capturing HD recordings of the entire adventure.

And so, on December 2nd, Branson, Cousteau, and Bergman – along with a team of cinematographers from the Discovery Channel – made the journey to Lighthouse Reef to begin their exploration.

With their live stream being broadcast to viewers all over the world, the three adventurers submerged in the waters of the Great Blue Hole.

Though the surface of the massive cavern looked almost clear blue from above, the depths below were anything but. Darkness met the team head on as they dove deeper and deeper into the hole, unaware of what treasures – or horrors – awaited them at its bottom.

Along the way, a variety of fish kept pace alongside the team, ranging from common ocean dwellers to the likes of the exotic Midnight Parrotfish.

But for every unassuming fin or tail that flitted by, they couldn’t help but keep their eyes peeled for the hammerhead and aggressive bull sharks that were known to prowl the area.

When the vessel arrived at the floor of the cavern the team immediately went to work mapping the dimensions of the hole. After only a few minutes of scanning, however, Branson and the others noticed a strange opening…

Curious, the team approached the opening, and inside they found the real treasure of the exploration: stalactites! This discovery would’ve meant little if stumbled upon in a typical cave system, but the fact that the find was made at such a depth underwater was unprecedented.

According to tests run on the rock formations, these stalactites were an astonishing 150,000 years old. Usually, stalactites only form in dry caves!

That means that the Great Blue Hole was once part of a larger cave system that formed on dry land. As remarkable as this was, though, this discovery actually points to a much larger issue.

With the Great Blue Hole now completely submerged under hundreds of feet of water, it’s a clear indication that the gradual warming of the earth is directly responsible for rising sea levels. As global warming continues to affect our planet, could this be a sign of things to come?

Richard Branson and his team seem to think so, and he’s pledged to aid in the effort to protect at least 30% of world oceans by the year 2030. With sea life covering over two-thirds of the Earth’s surface, now seems as good a time as ever to make sure that it stays that way.