Comet Atlas: When, Where, And How To See The Hyperbolic Comet 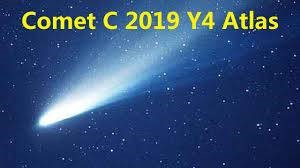 On December 28, 2019, the Asteroid Terrestrial-impact Last Alert System detected a new, peculiar comet according to inverse.com. When it was first observed, the comet was quite faint. But since then, it has been brightening at a rate of 0.25 magnitude every day as it makes its way closer to the Sun.

That's a much higher rate than astronomers first predicted, which has lead them to believe that the comet, dubbed ATLAS, is about to grace our skies with perhaps one of the brightest light shows that we’ve seen in a while.

In order to prepare skywatchers for this event, Inverse has put together an ATLAS guide on when, and how to view the comet? Where did the comet originate from? And what exactly are comets anyway?

Comet Atlas: When To See It?

As comets travel closer to the Sun, they increase in brightness as the heat from the star causes them to burn. ATLAS is headed toward the Sun, and will make its closest approach on May 31, 2020, where it will be as close as 23,517,819 miles to the star, that’s closer than planet Mercury is to the Sun. The comet ATLAS will be closest to Earth on May 23, 2020.

Since its discovery, ATLAS has surprised astronomers by increasing in brightness. Rolando Ligustri (CARA Project, CAST)

Comets are at risk of breaking apart as they draw nearer to the Sun, running out of gas and disintegrating from the heat of the star. However, if it does survive the journey, ATLAS will hit its peak brightness by the end of May, where it could possibly grow brighter than Venus and become visible to the naked eye.

In the meantime, skywatchers may be able to observe ATLAS within the next couple of weeks, should it continue to increase in brightness at the current rate. There are some astronomers who predict that the comet will be visible in the night sky around May 1, 2020, reports EarthSky.

Perhaps the most opportune day to view comet ATLAS would be on May 22 as it will coincide with the start of a new lunar phase. A new Moon is barely visible in the night sky as it lies on the same side of the Earth as the Sun, therefore it provides the perfect opportunity to view other objects in the sky without the disrupting light of the Moon.

The best time to view the comet is around 9 pm your local time, or 8 pm without daylight timing.

Comet Atlas: Where To Look In The Sky?

ATLAS is best viewed in the Northern Hemisphere, or north of the equator, so you should look toward that direction in the sky.

Comet Atlas: How Can You See It Clearly?

It is best to find a location far removed from interfering light, and to block out any kind of flashlight or electronic devices. You should allow for your eyes to get accustomed to the dark for about 30 minutes before viewing time.


Comet ISON was around 44 million miles from the Sun when it was captured by a telescope in 2013.NASA/MSFC/Aaron Kingery

Comet Atlas: How Bright Will It Be?

Although it’s difficult to predict exactly how bright the comet will be by the time it approaches our view, ATLAS has shown promise as it continues to increase in brightness over time.

When it was first discovered, ATLAS was at a brightness magnitude of around +20. But according to the Comet Observation Database, ATLAS has increased from a +17 magnitude in February to +8 magnitude in March, which is around 600 times brighter than astronomers had first predicted.

If it keeps going at this rate of increasing brightness, it could reach a magnitude of +5 by May 1, 2020. Afterwards, its peak brightness is estimated to be between +2 to -6. For comparison, Venus is at a visual magnitude of -4.48.

As a result, ATLAS could potentially be viewed with a trusty pair of binoculars or even with the naked eye. The last time a comet was visible to the naked eye was in 1997, when comet Hale-Bopp gave sky enthusiasts quite the treat for around 18 months.


Comet Hale-Bopp was the last comet skywatchers were able to enjoy with the naked eye.NASA

Comet Atlas: Do Do You Need A Telescope To See It?

Right now, ATLAS can be viewed by a medium-sized telescope. But as it gets closer to the Sun, and increases in brightness, then observers can ditch the equipment and opt for a portable pair of binoculars instead.


If it does reach the predicted brightness peak, then it could be seen by the naked eye.

Comet Atlas: Where Is It Coming From?

When it was first discovered, ATLAS was located in the constellation Ursa Major in the northern sky. Today, the comet is jetting across the orbit of Mars, and is headed toward the inner Solar System.

It is considered to be a hyperbolic comet, which means that its orbit stretches far and wide into the cosmos, with the Sun being a brief stop on its long journey. It is estimated that ATLAS orbits the Sun in more than 6,000 years, and uses the gravitational force of the star to push it out of the Solar System.

Some astronomers believe that ATLAS was once part of a larger, ancient comet that followed the same path, but broke apart into smaller fragments.

Comet Atlas: What's It Made Of?

Like all comets, ATLAS is made up of ice, dust, rock and gas.

Comets are made up of material that date back to the formation of the Solar System, and are believed to be the leftover scraps of planets.

The core of the comet is often rocky and frozen. However, as a comet approaches the Sun, the heat from the star turns some of the material into gasses and the radiation from the Sun pushes some of the dust to create a tail.

ATLAS has a green tail, made up of ionized carbon and cyanide gas.

Although scientists have been observing comets for decades, the rocky bodies are known for their shifty behavior.

While comet ATLAS shows promise to be a bright light in our sky thus far, things could quickly change and the comet could start to slow its rate of brightness. So, keep your excitement at a reasonable level for now.