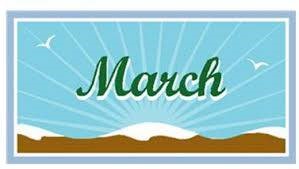 “It was one of those March days when the sun shines hot and the wind blows cold: when it is summer in the light, and winter in the shade.”
Charles Dickens, Great Expectations

“March came in that winter like the meekest and mildest of lambs, bringing days that were crisp and golden and tingling, each followed by a frosty pink twilight which gradually lost itself in an elfland of moonshine.”
L.M. Montgomery

“By March, the worst of the winter would be over. The snow would thaw, the rivers begin to run and the world would wake into itself again.

Winter hung in there, like an invalid refusing to die. Day after grey day the ice stayed hard; the world remained unfriendly and cold.”
Neil Gaiman, Odd and the Frost Giants

“They captured in their ramble all the mysteries and magics of a March evening. Very still and mild it was, wrapped in a great, white, brooding silence -- a silence which was yet threaded through with many little silvery sounds which you could hear if you hearkened as much with your soul as your ears. The girls wandered down a long pineland aisle that seemed to lead right out into the heart of a deep-red, overflowing winter sunset.”
L.M. Montgomery

“The seventeenth of March. In other words, spring. Desmond, people who think themselves smart, I mean those in the height of fashion, women or men - can they afford to wait any longer before buying their spring wardrobes?”
Colette, Cheri and The Last of Cheri

“POOR MARCH! It is the HOMELIEST month of the year. Most of it is MUD, Every Imaginable Form of MUD, and what isn't MUD in March is ugly late-season SNOW falling onto the ground in filthy muddy heaps that look like PILES of DIRTY LAUNDRY.”
Vivian Swift, When Wanderers Cease to Roam: A Traveler's Journal of Staying Put

“My birthday is in March, and that year it fell during an especially bright spring week, vivid and clear in the narrow residential streets where we lived just a handful of blocks south of Sunset. The night-blooming jasmine that crawled up our neighborhood's front gate released its heady scent at dusk, and to the north, the hills rolled charmingly over the horizon, houses tucked into the brown. Soon, daylight savings time would arrive, and even at early nine, I associated my birthday with the first hint of summer, with the feeling in classrooms of open windows and lighter clothing and in a few months no more homework. My hair got lighter in spring, from light brown to nearly blond, almost like my mother's ponytail tassel. In the neighborhood gardens, the agapanthus plants started to push out their long green robot stems to open up to soft purples and blues.”
Aimee Bender, The Particular Sadness of Lemon Cake

“Let her wake as when she close her eyes. That was all Jenny asked for. That was all she begged for on this March night that was perfectly equal to the day, unique in all the season. Let her be the same sweet girl, unburdened by gifts or sorrow.”
Alice Hoffman, The Red Garden

“It was an overcast day, but the cloudy weather did not detract from the signs of spring that were evident all around them. It was the second week in March, and the official start of the season was just a couple of weeks away. The magnolia trees had already bloomed, and tulips, daffodils, and wildflowers were shooting up all around the convent's gardens.”
Rosanna Chiofalo, Rosalia's Bittersweet Pastry Shop

“The almond blossom from the tree has gone, to be replaced by new green shoots. It smells of spring, and mown grass, and tilled earth from the fields beyond. Now is the month of Germinal in the Republican calendar: the month of hyacinth, and bees, and violet, and primrose. It is also the windy month; the month of new beginnings, and I have never felt it so strongly as I feel it now: that sense of possibility; that irresistible lightness.”
Joanne Harris, The Strawberry Thief

“This is the perfume of March: rain, loam, feathers, mint. Every morning and afternoon, I drink fresh mint tea sweetened with honey.”
Lisa Kleypas, Love in the Afternoon