Found: Chess Pieces Hidden in a Barn to Ward Off Evil Spirits 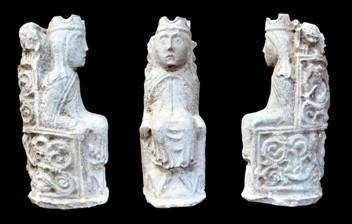 Ah, chess. The sixth-century, two-player board game that tests skill, strategy, and stamina worldwide according to atlasobscura.com. Each of the game’s 16 pieces (per side) has a role in the world of the chessboard. As it turns out, certain pieces may have had a use in the world beyond, too.

Recently, in a Lincolnshire village, a family renovating their old barn made a chance discovery among the wooden beams above. Two 19th-century chess pieces, a queen and a bishop, had been secreted over the mouth of the barn for many years. The find represents an old spiritual practice from the Victorian era: everyday objects hidden away as protective totems.

It is thought that the queen and bishop, which are suspected to date to around 1850, were concealed at the time of the barn’s construction. This particular structure was used for keeping livestock, within a larger agricultural complex (Lincolnshire has historically been, and still is, a farming area*), so a farmer may have placed the chess pieces there to watch over his animals. Adam Daubney, finds liaison officer for the Lincolnshire County Council, has encountered similar discoveries before, but none quite like this one.

“We often get reports of people finding things concealed in old buildings, objects such as miniature bibles, old shoes, bottles containing hair, and even mummified cats,” he says. “These finds—along with documentary evidence—tell us about the superstitions and beliefs of rural communities from as early as the 16th century.” Hidden objects like these tend to be located at the thresholds of buildings, so it’s understood that they operate as a spiritual patrol, minding the entrances and exits of evil spirits. “The purposeful concealment of the chess pieces makes it really clear that they were used as amulets,” Daubney adds, “as indeed does the purposeful selection of the queen and the bishop.”

According to Daubney, who has worked as a field archaeologist, the queen is likely a representation of Mary, Jesus’s mother, and the bishop, who is in a praying position, “was chosen owing to it being a potent symbol of the power of prayer.” Both feature ornate thrones and are cast in plaster of Paris, later dipped in resin. Based on the design, experts believe they were cast from a set of now-lost medieval molds.

This rare find is still owned by the family who stumbled upon it, but it’s not clear if they plan to place them over their front door.