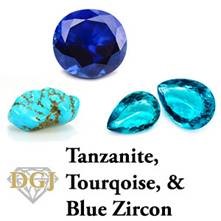 December birthdays can celebrate their month with Tanzanite, Blue Zircon, or Turquoise birthstones according to distinctivegold.com. All stones famous for their varying shades of blue color, and each with a unique set of characteristics and structure. These gems have all becoome a fashion statement across the world.

Turquoise is found in only a few places on earth: dry and barren regions where acidic, copper-rich groundwater seeps downward and reacts with minerals that contain phosphorus and aluminum. The color is, of course, turquoise, but this color actually varies from very green blue to light sky blue shades. The most-prized turquoise color is an even, intense, medium blue, but some people prefer a greenish blue. Where the turquoise forms can create matrix, some dark brown, some tan, these resemble splotches or veins. Some people actually prefer the presence of matrix. The most expensive and preferred turquoise is with no matrix, the second is known as spiderweb turquoise, thin, delicate, web-like patterns across the face of the gemstone.

A sacred stone for the North American Indians, as well as the Tibetans, it is often used by shamans in rituals and ceremonies. Turquoise is among the oldest known gemstones- it has been mined since 3,200 BC. It graced the necks of Egyptian Pharaohs and adorned the ceremonial dress of early Native Americans.  It is said to promote mental and spiritual clarity and expansion to enhance wisdom, trust, kindness, understanding and even good luck.

Special care is required for turquoise regardless of whether or not it is enhanced. A porous gemstone, turquoise can absorb anything it touches. Avoid contact with cosmetics, perfumes, skin oil, acids, and other chemicals. Avoid dehydrating it or exposing it to heat.

Zircon is an underrated gem that’s often confused with synthetic cubic zirconia due to similar names and shared use as diamond simulants. Few people realize that zircon is a spectacular natural gem available in a variety of colors. The name zircon likely comes from the Persian word zargun, meaning “gold-colored.” Others trace it to the Arabic zarkun, meaning “vermillion.” Given its wide range of colors – spanning red, orange, yellow, green, blue and brown, as well as, clear – both origins make sense. Zircon from Australia dates back 4.4 billion years. Since the Middle Ages, people have believed that zircon can induce sleep, ward off evil and promote prosperity, honor and wisdom.

Zircon jewelry should be stored carefully because although this ancient gem is hard, facets can abrade and chip. Clean with mild dish soap: use a toothbrush to scrub behind the stone where dust can collect.

Tanzanite is a new addition as a birthstone for December. Named for Tanzania, the country where it was discovered in 1967, by Tiffany & Co. It is found in only one place on earth, near majestic Kilimanjaro. Legend has it that tanzanite was first discovered when some brown gemstone crystals lying on the dry earth were caught in a fire set by lightning that swept through the grass-covered hills. The Masai herders driving cattle in the area noticed the beautiful blue color and picked the crystals up, becoming the first tanzanite collectors. They originally were thought to be a new find of sapphire. It has at times rivaled the Big 3 in popularity. It was so hot; that in 2002, it was the first gemstone to be added to the birthstone list, since 1912.