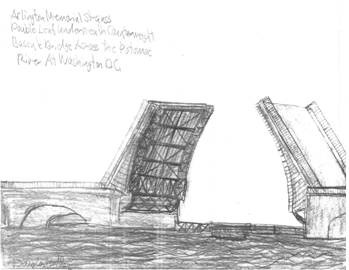 The hidden offices underneath Memorial Bridge have been locked up since 1976 according to atlasobscura.com.

Underneath the middle section of Arlington Memorial Bridge, two trailer-sized offices hang from the steel superstructure, with grated windows looking out at million-dollar views down the Potomac River. Inside these two oddly placed rooms sits the abandoned, century-old machinery that used to allow the middle span to open up like a drawbridge.

The bridge was designed in 1929 by New York architects McKim, Mead & White as a neoclassical, granite-clad concrete structure, inspired by the aqueducts of Ancient Rome. Specialists at the Strauss Engineering Company were brought in to work out the engineering behind the challenging draw span that would permit river traffic to reach the Georgetown waterfront upstream. (Within the decade Strauss would also be busy at work on another storied bridge in San Francisco, the Golden Gate.)

Four million pounds of iron housed in the two piers on either side of the draw span acted as counterweights and could lift the two leaves vertical in just a single minute. Hidden from view inside the bridge piers, the draw span control rooms only popped into public view when the mechanism broke down and caused traffic delays, which it did with some regularity.

Memorial raised its drawbridge for the final time on February 28, 1961. The Theodore Roosevelt Bridge under construction a third of a mile upstream was a solid concrete structure, which eliminated the functionality of Memorial’s draw span. Finally in 1976, the leaves of the Memorial Bridge draw were sealed, and the doors to the control room locked for good.

Most Washingtonians today have forgotten that the drawbridge section ever existed. Its stamped metal facade blends in with the granite and only betrays their secret when viewed from below. Back in the day engineers would have entered the control rooms through small doorways tucked into the corner of the sidewalk above; today the only way you can catch a glimpse is by boat.

Rent a kayak in Georgetown and paddle down when the weather is nice.